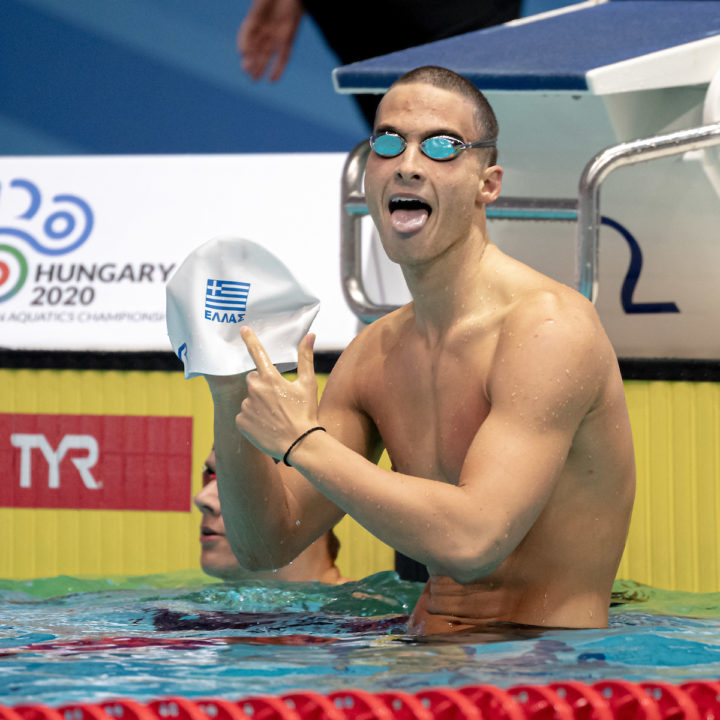 Greece’s Apostolos Papastamos torched the WJR, CR, and Greek National Record in the final of the men’s 400 IM in Budapest on Saturday night going 4:11.93. Archive photo via G.Scala/Deepbluemedia/Insidefoto

Greece’s Apostolos Papastamos torched the World Junior Record and Championships Record in the final of the men’s 400 IM in Budapest on Saturday night. He also took down the Greek national record of 4:14.41, set in 2012 by Ioannis Drymonakos at the European Championships. The previous World Junior Record of 4:13.39 had been set by USA’s Carson Foster at the 2019 U.S. National Championships. Foster was in the final of the 400 IM on Saturday night at World Juniors but he placed sixth with 4:17.39.

Papastamos had a monster second half of the race. He was in fourth place after the butterfly, going out in 57.49. By the end of the backstroke he had moved into second place behind Foster, who at that point was 2/10 under his WJR pace with 2:00.89. With a split of 1:10.58 on the breaststroke, though, Papastamos moved into first place and was a full body length under the WJR record line. Russia’s Ilia Borodin, who split 1:10.69 on the breast, had moved to second place. Papastamos led Borodin by 6/10, while Foster had fallen back to third place by three seconds. Papastamos brought it home in 59.81

Below is a side-by-side comparison of Papastamos’s World Junior Record with that of Foster from July and Gonzalez’s from 2017:

Borodin took the silver medal in the World Junior Championships final with 4:12.95, also finishing under the previous World Junior Record. France’s Léon Marchand surged past USA’s Jason Louser over the final 50 meters to snatch the bronze medal with 4:16.37.

The real wjr is haginos 4:08 that’s not ratified

There were a lot of good breast splits in the final. He swam a 1:10 which is world-class.

New names are popping up in the mens 400 IM. Add his name to list of contenders for the WC and Olympic medals.

No chance that he will win a medal, but maybe he can make the final.

what a slow time, hard to believe. Glad some of the youth are stepping up

The next great IMer for Greece. I’d love to see him follow Vazaios and join NC State after the Olympics.

Would have been 3rd at World Champs. Watch out!

That’s the swim I expected from Papastamos at Euro Juniors after his 200. Such a complete IMer, super effort.

Not particularly surprising. As I’ve posted many times recently, there is so much room in these individual medleys. Apparently none of the swimmers want to do the work. They allowed Phelps and Lochte to push the standard to new level, and then felt we’re not in their league anyway so we’ll pretend it never happened and continue to be content with 10 seconds slower. That an out of shape Lochte could belly flop into the pool and win a national championship by more than 1 second was a blatant indictment of what the medleys have become in recent years. Any swimmer who is on the fence toward what event to emphasize should choose the medleys. It may seem like more… Read more »

I think foster swam too many races. His tank is too empty for the 4 IM at this level this late in the season. He had a 4:10 in him but not after ten races.