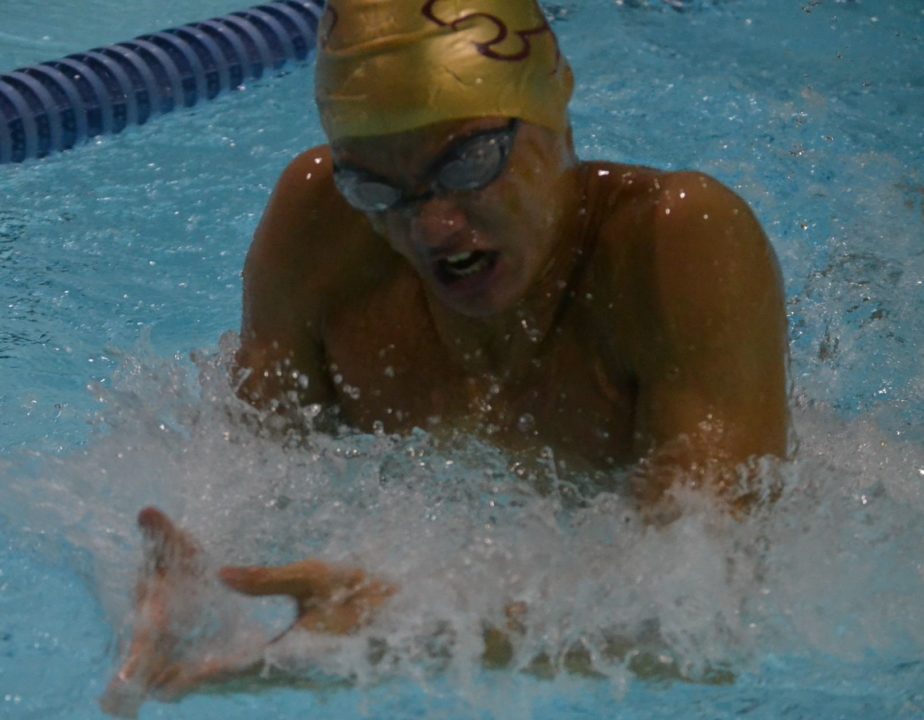 Oakton high school junior talks about a recent back injury, his favorite walkout music, and what he enjoys the most about swimming. Current photo via courtesy of Jennifer Coon

Oakton high school junior Anthony Grimm burst onto the national scene last year when he threw down a blistering 20.87 medley relay leadoff at the 2019 VHSL Class 6 Championships, helping his team to a state title. He was at the top of the list in our “Way-Too-Early” recruit ranking for the high school class of 2021, and he’s verbally committed to the University of Texas Longhorns.

Grimm suffered a back injury earlier this season, so he was out of the water for a while, but this weekend, still won the 50 free in 19.79 and the 100 breast in 53.86 at this year’s state championships. Contributor Matt Rees spoke with Grimm at that meet, and Grimm talked about that back injury, his choice of walkout music, and what lies ahead for him this spring and beyond.

More about Grimm from Rees’ recap of the VHSL Class 6A State Champs:

As for Grimm, SwimSwam’s top ranked high school junior in the nation, the 50 free was his marquee race of the night. With an explosive start and smooth underwaters, he finished in 19.79, which puts him in a select corps of high school swimmers who have gone under 20 (see the race here), and only half a second away from Caeleb Dressel’s national high school record. While the time was slightly slower than Grimm swam at last year’s state championship meet (19.67), the University of Texas commit is coming off a back injury that led to him being out of the pool for two months recently, and he’s only been training again for the past six weeks.

Later in the meet, he swam the 100 breaststroke, and walked to the blocks with “Stronger” blaring on the sound system. With Kanye West crooning about “harder, faster, better, stronger,” the song fit the moment, and Grimm fed off the energy to set a new Virginia state record (53.86 – see the race here), just squeezing past the 53.90 mark set by Andrew Seliskar (last year’s NCAA swimmer of the year) in 2014. Grimm’s other swims of the night were a 21.25 backstroke leg to lead off Oakton’s 200 medley relay, which finished third, and a 44.75 split in the 400 free relay, which Oakton won.

Is that a UT commit I see