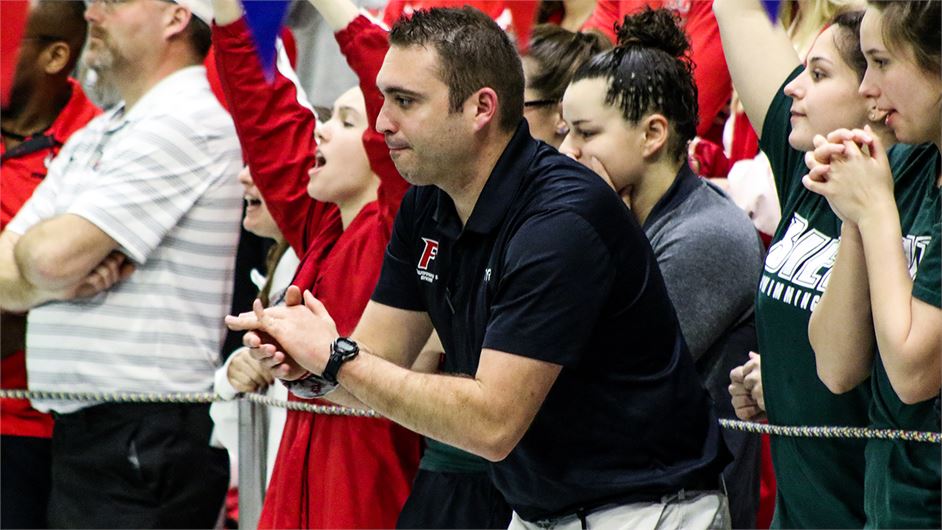 Bruno comes to Towson after spending the last five seasons as the head coach of the men's and women's swimming & diving programs at Fairfield University. Archive photo via Towson Athletics

Anthony Bruno has been named the new head swimming and diving coach at Towson University, with Director of Athletics Steve Eigenbrot making the announcement on Wednesday.

Bruno comes to Towson after spending the last five seasons as the head coach of the men’s and women’s swimming & diving programs at Fairfield University, where he was a three-time Metro Atlantic Athletic Conference (MAAC) women’s coach of the year.

“My wife Katie and I could not be more thrilled to be a part of the Tiger community,” said Bruno. “Towson is on the rise and the energy was incredible during my visit. I want to thank (Towson president) Dr. Kim Schatzel, Steve Eigenbrot, Tricia Turley Brandenburg, Terry Porter, and everyone involved with the search committee for this opportunity.

“Towson has a great swimming and diving tradition. I am humbled and excited to be the next head coach of the program. I am looking forward to building relationships with the current team members and getting going on campus.”

The head coaching position at Towson became vacant following the conclusion of the 2021-22 season when Jake Shrum, who was at the helm with the Tigers for six seasons, joined his alma mater, the University of Virginia, as an assistant.

“As we embark on the next chapter of Towson swimming and diving, we are very excited to welcome Coach Tony Bruno and his family to our team here at Towson,” said Eigenbrot. “He brings experience as a successful head coach, as well as a history of building both men’s and women’s programs.

“We have no doubt he is the right person to lead our program and look forward to celebrating many great days in the pool under his leadership.”

During his time with the Stags, Bruno led the women’s team to back-to-back MAAC Championship titles in 2019 and 2020, the first two in program history. Over five seasons he mentored 24 MAAC champions on the women’s side while helping 23 men’s swimmers earn a top-three finish. He also guided the men’s program to their first-ever relay victory at the conference level.

Prior to joining Fairfield in April 2017, Bruno spent four seasons at Iona College, serving three as an assistant coach before being promoted to associate head coach in his final year. In addition to recruiting duties, Bruno worked to design, administer and organize team and individual workouts for the Gaels while also working closely with the strength and conditioning staff to enhance weight training for the program.

A native of Southbury, Conn., Bruno first entered the collegiate coaching ranks with Wesleyan Unversity in his home state, spending three years as an assistant coach.

Bruno earned a Bachelor’s Degree in movement and sport science from Springfield College in 2009, and during his time as a student-athlete, served as a team captain and was a two-time NCAA Division III All-American.

Most recently, the Towson women placed third for a seventh consecutive time at the Colonial Athletic Association (CAA) Championships in 2022, while the men’s team finished third. In 2020-21, the men’s team won their first-ever CAA conference title.

Great hire – never swam for him, but got to know him quite well during his time at Fairfield. I believe he will be a stalwart for this program for years to come

Congrats, Tony!! You continue to make us all proud.