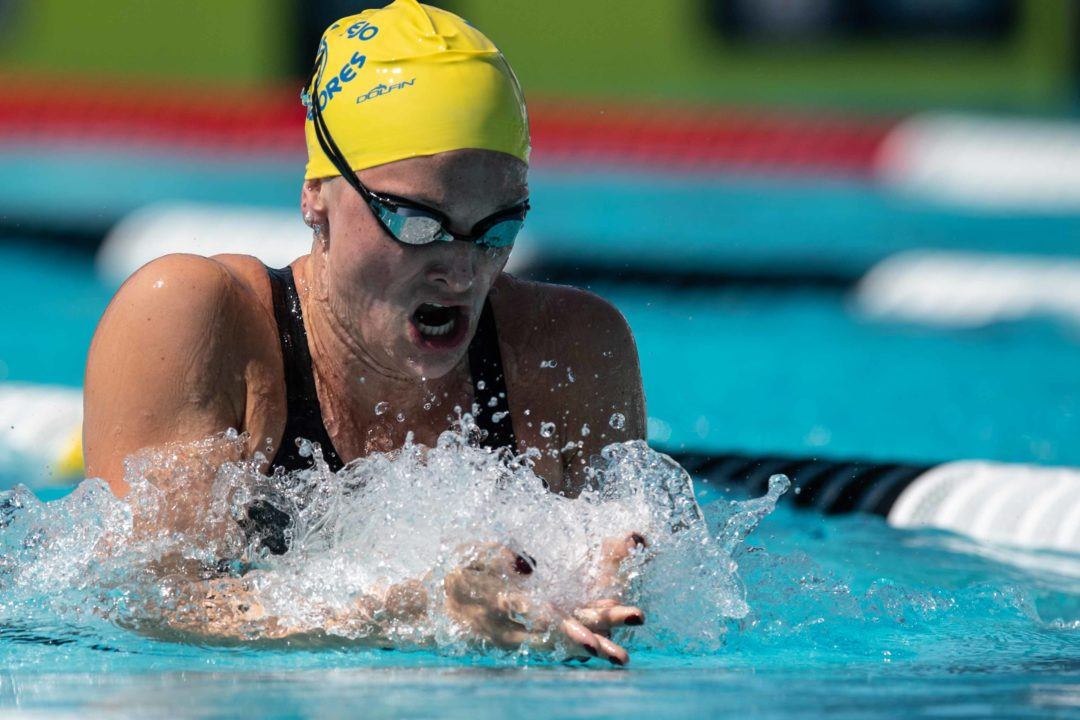 After a big breakthrough at the World Short Course Championships in December, Annie Lazor is full-steam ahead for 2019. Archive photo via Mike Lewis/Ola Vista Photography

Swimming on Thursday morning in the first prelims session of the Pro Swim Series in Knoxville, Lazor qualified 1st in the 100 breaststroke in 1:07.28. That cut more than 6-tenths of a second from her previous lifetime best of 1:07.89 that she swam at the 2016 Olympic Trials.

Lazor, who is representing the Mission Viejo Nadadores officially, but is training as part of the post-grad group at Indiana, where she arrived at the end of April, 2018.

Lazor split her undergrad time at Ohio State, where she swam as a freshman, and Auburn, where she swam as a sophomore, junior, and senior. She came to college with an Olympic Trials semi-final appearance already on her resume, having placed 15th in the 200 breast in 2012.

Lazor had another big summer in 2016 after spending a training block with David Marsh and SwimMAC Carolina and took 7th place in the 200 breast at the Olympic Trials.

After bypassing the 2017 long course season, she joined the training group at Indian, and while she didn’t go a best time in the 100, she did knock half-a-second from her 200 time at Summer Nationals, finishing 3rd in 2:24.42. She’s now training with the country’s best-performing coaching staff for breaststrokers at Indiana. Hoosier swimmers swept the 100 breaststrokes at last year’s NCAA Championships, Lilly King holds 6 American Records in breaststroke, Cody Miller is an Olympic medalist (though currently dealing with injury problems). To prove that the momentum isn’t slowing down either, Noelle Peplowski is the #2-ranked freshman in the NCAA in the 200 breaststroke this season, having already dropped more than 5 seconds from her previous lifetime best in the event.

The right training environment, combined with the spark from a huge breakthrough in her first big international appearance, has accelerated Lazor’s trajectory – even coming out of high school with a lofty resume. The American 200 breaststroke has lacked depth in recent years, but Lazor’s emergence, along with the return of another Auburn grad Micah (Lawrence) Sumrall, among others, will give Lilly King and Bethany Galat the challenge needed to accelerate the group headed toward Tokyo.

i love annie lazor and noelle pooplowski soooo much!!!!!