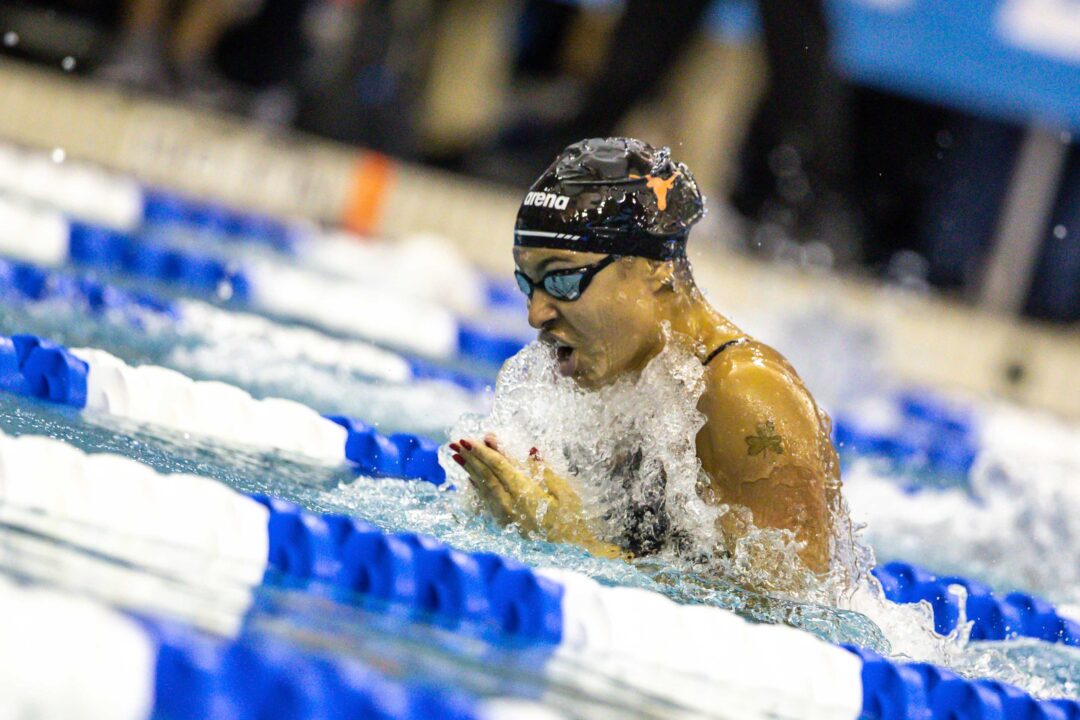 Anna Elendt won the 50 and 200 breast for Texas against TCU Friday night. Notably, her 200 breast was a second faster than she was in October 2021. Archive photo via Jack Spitser/Spitser Photography

Dust Your Boots Off Dual (TCU vs Texas)

Sam Artmann of Texas also picked up two wins, sweeping the fly events in the process. Artmann went a 21.74 in the 50 fly and a 1:46.22 in the 200 fly. His 200 fly was three seconds faster than he was in the event a year ago, showing the potential for progression throughout the season.

Like the women’s side of the meet, the TCU men picked up wins in the 200 IM and 400 free relay after Texas began to exhibition. Notably though, TCU won the three meter diving event as Max Burman had a final score of 356.03.

As pointed out in our preview, the Texas men have been well-known for diving but recently haven’t been at the same level as in previous years. Although the diving event was won by TCU, it is important to note that they were without Noah Duperre, their highest returning scorer from NCAAs, as Duperre was instead competing at the SMU Classic.

Although the Texas men were in attendance at the SMU Classic, the women’s team was not. Notable names that did not compete for the Longhorn women were US Olympians Erica Sullivan and Lydia Jacoby.

Texas won the 1m diving event (by a freshman!) and overall won diving based on finishes on 1 and 3m events, not TCU.

Actually, TCU men won the 400 FR. Not a sweep by any means; although I understand Texas did not stack/swim any of their top swimmers.

By 0.01! It was a very nice race to finish the meet and TCU went back to the bus with a bit of enthusiasm

Any idea why Erica Sullivan and Lydia Jacoby didn’t swim?

Olivia Bray was absent too. Not sure what’s up

Erica posted on Instagram that she had COVID. It potentially infected more than one member of the team.

If you follow Lydia Jacoby on IG, it’s not due to Covid. Seems she is loving being in TX and bonding with her teammates. I don’t know when she has time to attend class between all of the restaurants, concerts and football games.

Jacoby seems like she is starting a modeling career. I think she got swept up in fame from 2021.

No other swimmer at Texas has their own bobblehead.