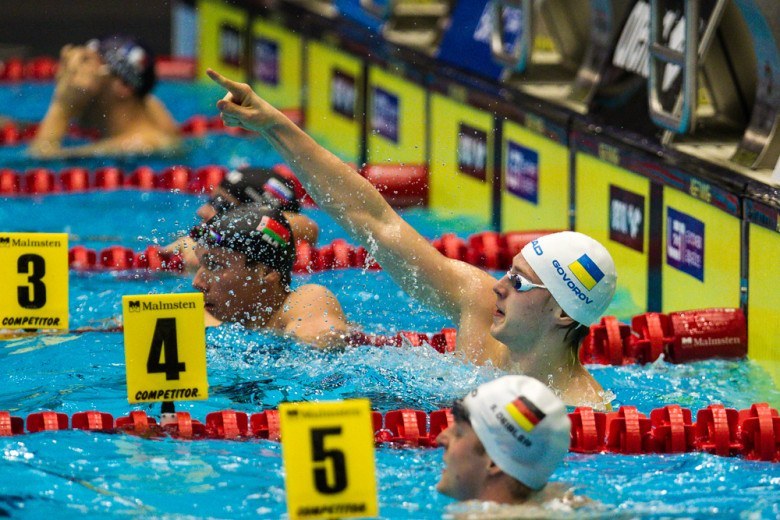 Andriy Govorov (UKR) put up a new textile best in the men's 50 fly semi's in London. It also happened to be a Championship and Ukrainian record. Archive photo via Jesper Nielsen

The first finals session of the 2016 European Championships in London went off tonight, and Ukraine’s Andriy Govorov showed he is on great form. After putting up the top time in the men’s 50 fly heats in 23.00, Govorov threw down the fastest textile swim in history in the semi-finals of 22.73, breaking the old mark of 22.76 set by Brazil’s Cesar Cielo in 2012.

Govorov’s swim was not only the fastest textile time ever, it was also a new European Championship record and a new Ukrainian record. Both records were set by Govorov at this meet two years ago in Berlin, where Govorov posted a time of 22.87 in the heats. He would go onto tie for bronze, losing out to Florent Manaudou (FRA) and Yauhen Tsurkin (BLR) and tying with Ben Proud (GBR). Manaudou and Tsurkin tied for gold in 23.00, slower than Govorov was in the prelims.

Govorov heads into the final tomorrow night as the clear favorite for gold, as the next closest in the semi-finals was the man he tied with for bronze two years ago, Ben Proud. Proud posted a time of 23.42, 0.69 off of Govorov. There are many men in the 23.5-23.7 range, but none look like they have a shot at touching Govorov if he comes anywhere close to what he went in the semi-final.

The 50 freestyle will be Govorov’s only other race of the meet.

Ozzie didn’t read that the dude is Ukrainian?

It is more an ethnic Russian name than Ukrainian but you can’t assign someone into politic, most of us arec passengers. . Geographically he comes from & studied in East Ukraine . Lucky he avoided the draft & lived to swim another day.

That’s a shame he can only go 53.68, but you know why when you look at the tape of the 50 and see he wins it all on his insane tempo, and you know there’s no way he could come close to keeping that up once he surfaces after the turn and breakout.

Awesome swim. One of the few flyer sprinters that come up fairly short after the start too !

Ozzie – Govorov is Ukrainian, not Russian.