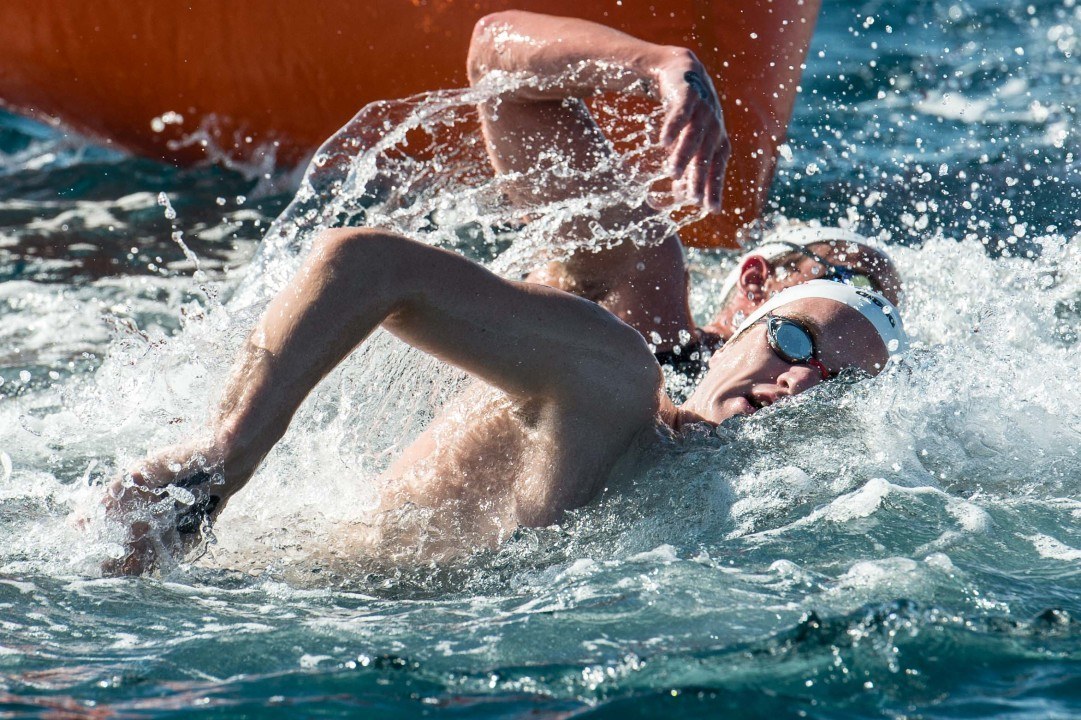 Andrew Gemmell (above) earned $17,000 at the top finisher in the men's 10km race at the Swim the Swan event in Perth, Australia. Archive photo via Mike Lewis/Ola Vista Photography

With $74,000 worth of prizes on the line, including $17,000 to each of the winners, the hot hands from last summer’s championship meets remained hot in Perth, Australia, with American Andrew Gemmell and Netherlands’ Sharon van Rouwendaal took home top honors.

This race is the open water segment of the BHP Billiton Aquatic Super Series, though unlike pool swimming and water polo, it is an open event.

When the men’s 10km race came down to the finish, there was only one Australian in the mix at all (Jarrod Poort), but the day went to the Americans, as Andrew Gemmell beat countrymate Alex Meyer by about a second-and-a-half. Gemmell touched in 1:45:26.90 to Meyer’s 1:45:28.30.

Britain’s best swimmer, Daniel Fogg, was a fingernail behind Meyer at a photo-finish (.05 seconds to be exact), which earned him 3rd place and $6,000.

On the women’s side, the relative-newcomer to open water Sharon van Rouwendaal stamped more success on her resume as she might have moved into the favorite’s roll ahead of the 2016 Olympic Games.

Whereas the men’s race was quite competitive, van Rouwendaal dominated the women’s race by 38 seconds ahead of runner-up Keri-Anne Payne of Great Britain.

Once again, the Australian’s failed to defend home water. Their top finisher was Melissa Gorman was 6th in 2:09:23.20 – almost a minute behind the winner.

Update: Eva Fabian was originally listed as the 5th-place finisher in official results, but that has since been updated. Read more here.

While the 10km race was the big show, there were still prizes available in the shorter races. American Tyler Clary took an easy win in the men’s by-category 5km race, earning a $200 2XU voucher for his efforts.

Sharon’s transition from worlds medalist in 200 backstroke to open water and distance events has been nothing short of amazing.

It will be interesting to see how she will fare in Kazan.

I’m going to say it . Too quick , too fast , over too many distances at a rapid improvement rate at an age that has been historically too old . If she had that capacity naturally we would have seen glimpses of it before ( she was pretty ordinary .) even Ledecky could not do what she does .next she will be in the 4×100 .!

For nations that are politically protected we will have to wait many years to find out . Unless someone steps on up with some new sport science paradigm – then bwah bwahbwah. Not buying it .

Isn’t she with Phillipe Lucas now? IIRC, he runs a pretty meat grinder program, and she may make it to Rio with him, but will part ways no later than 4th quarter 2016, just like Laure Manaudou and Federica Pellegrini eventually moved on for saner lanes.

Sorry – there is nothing in that background to show extraordinary powers from 400-10,000.

Pellegrini under Lucas would have done it before Sharon.if the famed 19km days worked such at treat.

If distance coaches like Cotterill’ & Bohl can be deceived so can others.

I don’t think you know what you are talking about. Knowing Sharon and the dedication and hard work she is doing, in combination with her natural talent for medium and long distance and the fitting program she gets with Lucas in Narbonne, would make you say differently. In general a talented and dedicated athlete will never dope, as long politics, money or power as an external motivation stays absent. This certainly is the case with Sharon who has a high intrinsic motivation to excell as an athlete and a person.

The difference between Laure Manaudou and Sharon is Manaudou did not like to swim and was more interested by her very full and complicated love life than by swimming, and Sharon is a very enthusiastic long distance swimmer. It is allways possible to be burnt out before the Olympics, but Van Rouwendaal is mature and solid. Pellegrini, this is an other thing. She had lost the coach she trusted and wanted to have a very strong character to drive her. Lucas is probably not a very good technical coach, bu his pupils believe in him, they are not afraid of competition because he is not afraid of competition, he makes them very confidant in their capacities (in a very different… Read more »