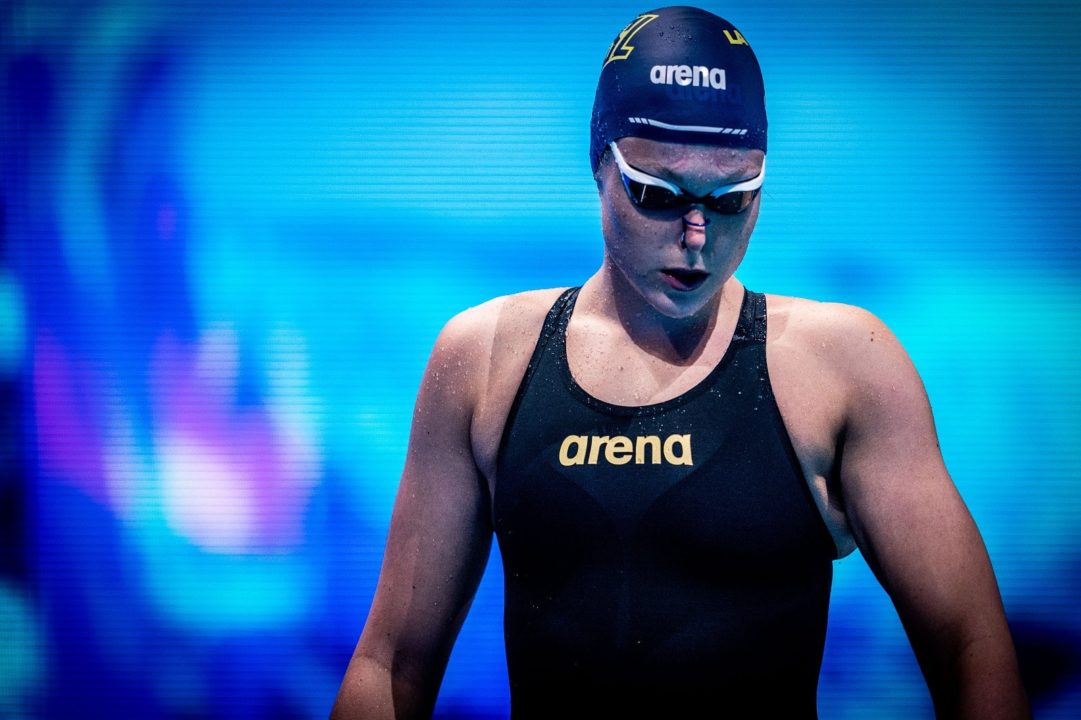 Anastasia Gorbenko now adds a National Record in the 100 back to previous records in the 50 and 100 breaststroke set earlier this week. Archive photo via Mine Kasapoglu/ISL

Israeli 17-year old Anastasia Gorbenko has broken the Israeli Record in the 100 meter backstroke, marking the 3rd individual event in which she’s cleared a National Record this week in Budapest.

Gorbeko swam 59.96 to make her the first-ever Israeli woman under 1 minute in the event. That swim broke her own record of 1:00.58 set at the 2019 FINA World Junior Championships in this same pool in Budapest.

The swim qualified her through to Thursday evening’s semifinals in 5th place behind top seeded Kathleen Dawson of Great Britain, who posted a 59.32 in prelims.

Gorbenko closed half-a-second faster than she ever has before to break the record.

This is not an event where Gorbenko has focused much energy in long course – she hasn’t swum the race since November 2019. That makes it a bit of a surprise that she’s racing the event here at the European Championships, but it aligns with preparations for the IM events where she has her best chance at an Olympic final this summer.

Gorbenko now holds individual Israeli Record in 8 long course events and 7 short course events. The long course list includes the 50 and 100 breaststroke, both of which were broken already this week: she set the 100 breaststroke record in the semifinals on Tuesday in 1:06.74, and her first 50 meter split in that race of 31.33 was also the Israeli Record in that event.

Does anyone know why she did not swim the 400 IM on day 1?
Was it simply because that event was on day 1 or is she stepping away from that event (thought she had done fairly well in the 400 IM)?

She’s done better at the shorter events recently and I think she may be focusing on events where she has a better chance of getting A cuts (this is the second new A cut she’s hit this week which gives her a total of four) and based on Israeli qualifying criteria she can swim any event she hits an A cut in. She’s also been swimming a lot of relays so she may not have wanted to crowd her schedule unnecessarily.

The picture made a much stronger impression on me than the words. As a result was my reaction that Anastasia broke a minute in the 100 breaststroke. AMAZING!

How many other female swimmers are capable of both sub 1:07 100 breast and sub 1:00 100 back? Kathleen Baker and Alex Walsh come to mind.

Quite possibly Kaylee McKeown before too long, she has 1.07 in the 100 breast as seems to be constantly improving. Hosszu & O’Connor potentially in Rio form too – But we’ll never know with them now.