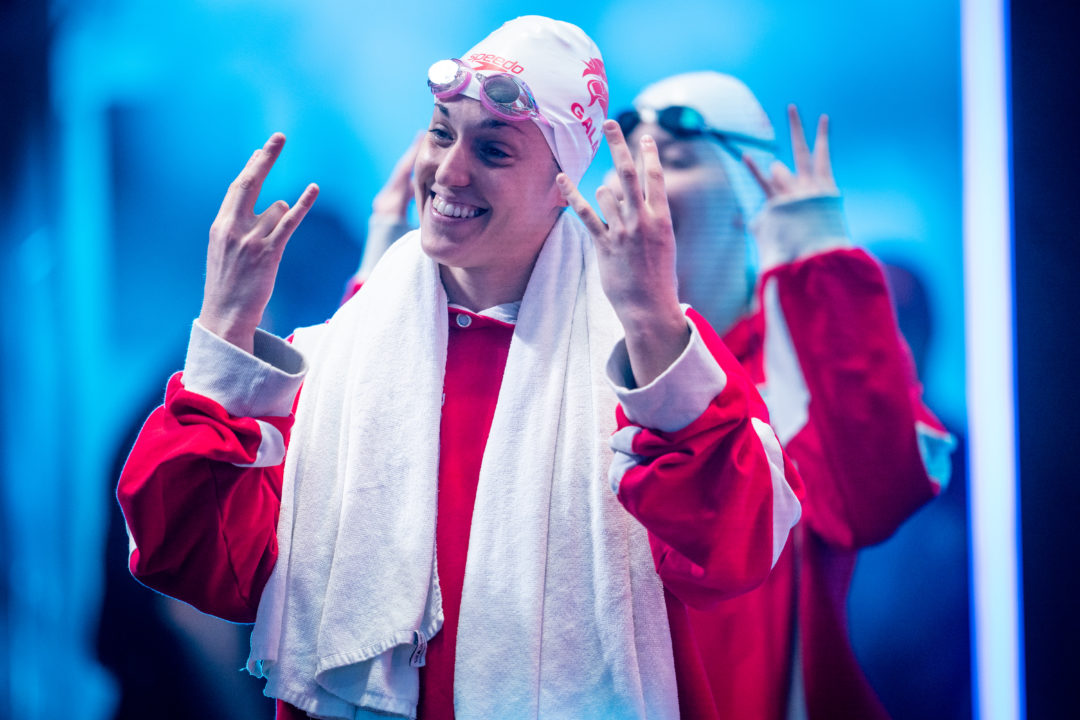 Think you know your favorite ISL team inside and out? Ok, what's their go-to hand symbol when walking out as a team in Budapest? Current photo via Mine Kasapoglu

With the regular season of the International Swimming League (ISL) having wrapped up this week, we can reflect back on the 10 high-octane matches which took place in Budapest, Hungary.

We were treated to breakout performances by emerging aces such as Emre Sakci of Iron and Anastasia Gorbenko of LA Current, while the veterans like Caeleb Dressel and Abbey Weitzeil also earned the spotlight.

But in addition to the pool racing that is unique to the ISL, fans have the ability to view matches in real-time, live and up close. We get a detailed picture of team walkouts, post-race high-fives and general squad camaraderie crisper. The real-time, mid-skins coaching of which we were privy is also a special element to this ISL season 2.

Building into the team atmosphere is the fact that each squad dons its own warmups, gear, and caps. However, most took the idea of team spirit to the next level with specific pre-race and post-race hand signals.

Much akin to what we see in NCAA competitions, such as NC State swimmers make shifting their hands into a wolf or University of Louisville shaping their fingers into an ‘L’, these professional swimmers got creative with their own symbolic gestures to make sure viewers know which team they represent during ISL season 2.

Below are the pre-and post-race rituals seen in Budapest thus far this season.

With a mascot of a rhino, it’s easy to see a horn-in-the-making with the NY Breakers swimmers.

In a slightly more literal hand gesture, we see the DC Trident form an actual, well, trident to show the world what’s up.

With the aforementioned Emre Sakci making his presence known in the breaststroke skins we saw him beat his bicep more than once in tribute to Iron.

In an ISL first, the Tokyo Frog Kings actually brought their own in-the-flesh mascot in the form of a wide-eyed frog. The cute stuffed animal appeared harmless and benign in the crowd, but when the squad channeled its energy into their swims the Frog Kings aggressively hopped into the semi-finals.

Not too much abstract interpretation with this one, as the Toronto Titans went with the classic big letter ‘T’ made with their arms perpendicular. Simple, yet effective.

Scanning photos of Energy Standard brought a mixed bag of on-deck routines. There doesn’t seem to be one official team cheer per se, but the swimmers did seem excited enough to defend their ISL season 1 title.

LA Current touts the tag line ‘Stay Wavy’ but seeing a mini-arm wave was not the in cards when reviewing the mass of ISL photos taken thus far. Instead, might we suggest Dylan Carter’s aspiring model headshot pose as a possible post-race ‘thing’ for semifinals?

The Aqua Centurions were more of a traditional waving-type team paired with charismatic smiles and killer baby blue team colors.

Perhaps the most recognizable due to its leading man of Caeleb Dressel, the winged hands is hard to miss and easy to attribute to the Cali Condors team of all-stars ready to make a run at the ISL season 2 title.

I will admit a cringe a little when I see some of them.

Once again the Frog Kings come out on top in out-of-pool matters.

That mascot is absolutely adorable!

This was a cute article!