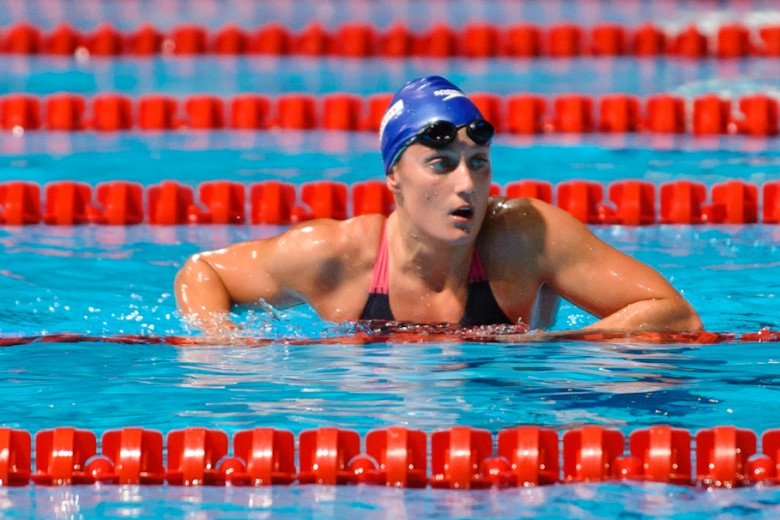 The Amsterdam Cup Is both the first Dutch Olympic qualifying meet and a key step on Mireia Belmonte's comeback path. Archive photo via Victor Puig

Florent Manaudou is set to make an appearance in the 50m, 100m and, um, 200m freestyle events at the Amsterdam Cup slated to start on Friday.

The 2015 Amsterdam Cup is the first opportunity for Dutch swimmers to qualify for their Olympic team, as well as serving as an elite level competition for the Netherland’s European neighbors. In our preview, we spelled out who to expect to see in action this weekend.

While the action is expected to heat up in finals tonight, the morning featured mainly conservative swimming from the top competitors. Martina van Berkel was one swimmer who got after it immediately, setting an Amsterdam Cup record in the 200 fly (2:10.01).

Although no qualifying was at stake, two Dutch swimmers got their competition off to an excellent start in the 50 backstroke. Maaike de Waard set a meet record in the 50 backstroke (28.18). LouLou Janssen set a Dutch junior record and will swim in the same final tonight (29.18). De Waard needs .02 to make a qualifying time for European Championships.

The time was a personal best for de Waard, and bodes well for her best shot to make a FINA “A” standard in the 100 backstroke. She will need to swim 1:00.25 in that event to make the time.

That sets up a good race tonight between van Berkel and Mireia Belmonte, on the comeback trail from injury. Belmonte needs to start showing she can put up world class times if she is going to be competitive in Rio. Van Berkel, who represents Switzerland’s top club Limmat Sharks Zurich, also has more potential, she holds the national record at 2:08.45.

Also in that final is Kate Mills, a swimmer who has found way to hang around another four years and has an outside shot of making the US team. The 26 year old put up a personal best this past summer of 2:08.89 and has already been 2:10 this season on the World Cup circuit. She qualified 4th this morning in 2:12.14.

The 50s of stroke will be intriguing even if there is no qualification in play. The men’s 50 butterfly has three stars: Konrad Czerniak, Steffen Diebler and Frederick Bousquet qualified in that order. The women’s 50 breaststroke has Spain’s Jessica Vall up top, with Moniek Nijhuis coming off a stellar European Short Course looking to set herself up for qualifying in the 100 later.

Dutch swimmer Sebas von Lith came up short of Olympic qualifying time in the preliminaries but will have another chance tonight. He swam 2:12.70, and qualifying sits at 2:11.07. He’ll be joined in the final by both Giedrus Titenis and Adam Peaty.

One Dutch athlete who did manage an qualifying standard was veteran sprinter Sebastiaan Verschuren. He finished in 48.88 to get one tenth underneath. Notably Florent Manadou did not qualify for the final, finishing the preliminary in 20th at 50.46. That time will be good enough to get him to the European Championships but is still short of the 48.46 he will need to qualify for Rio.