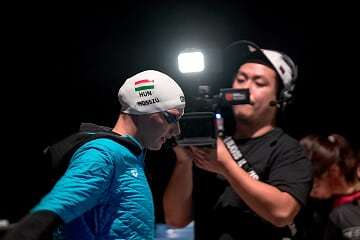 Two months after filing an antitrust suit against FINA for blocking the ISL, Hosszu has committed to the inaugural FINA Champions Series. Archive photo via Kevin Reust

The three-meet series (Guangzhou, April 27-28; Budapest, May 11-12; Indianapolis, May 31 – June 1) will be swum in long course with athletes participating on an invite-only basis and will include a team scoring format. It was announced in December seemingly as a direct response to the International Swimming League, which features a similar structure.

Hosszu, along with Americans Michael Andrew (also committed to the Champions Series) and Tom Shields, is currently a lead plaintiff in a class action lawsuit against FINA that alleges it violated U.S. antitrust laws through the series of actions it took to block the ISL‘s 2018 Energy for Swim meet that was supposed to be hosted in Italy in December.

Hosszu is the dominant figure in the last decade of the FINA World Cup Series, which in mid-2017 made changes that limited her earning potential. Shortly before the 2017 FINA World Championships in her home nation of Budapest, she formed GAPS, a professional swimmers union that says its mission is for swimmers to have a voice in the future of the sport and rule changes under consideration. Since then, she’s remained at the forefront of athletes calling for better ways to earn a living through swimming. She, Andrew, and Shields were also among the approximately thirty athletes who gathered at the ISL summit in London two months ago to discuss forming a global ‘Swimmers’ Association,’ among other topical issues.

A month before the 2018 Short Course World Championships, before the antitrust suit was filed, FINA nearly doubled the meet’s prize money – a change that benefitted Hosszu directly as she led all attendees with $54,000 in earnings. For the Champions Series, FINA will award nearly $4 million in prize money, making it the richest swimming event in the organization’s history. It will also cover athletes’ travel costs and provide them with appearance money.

Known for her rigorous competition schedule, Hosszu has also committed to swim all three stops of the 2019 Nordic Swim Tour, all taking place in the first half of April.