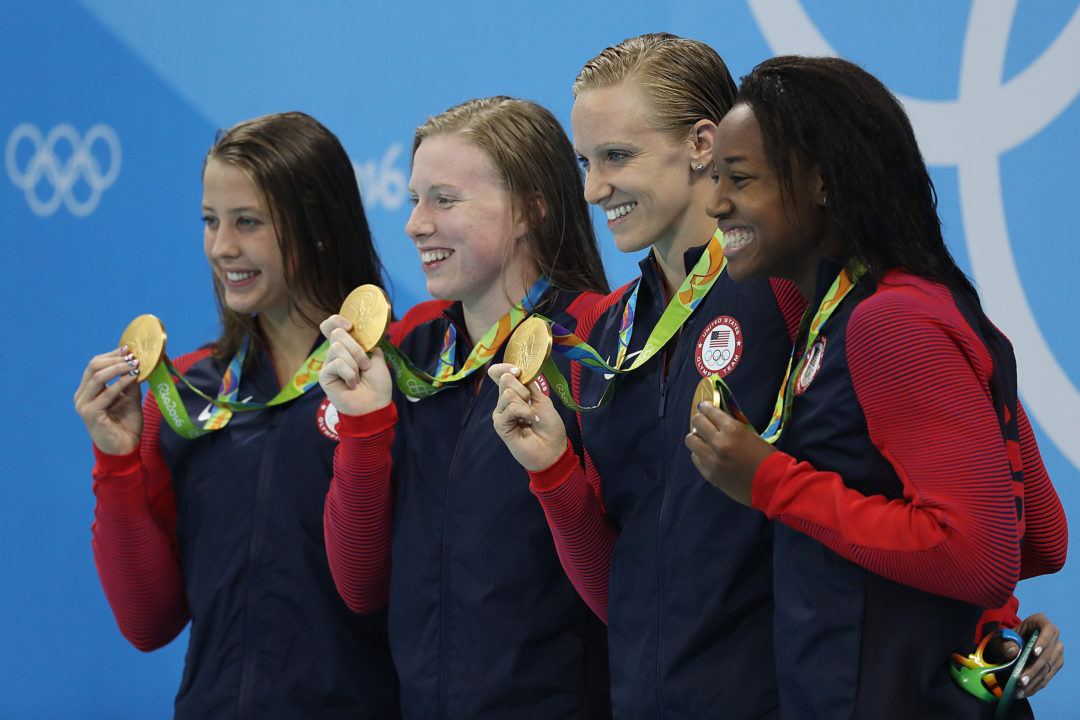 At the Olympics all that really counts is a swimmer’s place, but swimming is a sport measured by times. Expectations... Current photo via Simone Castrovillari

The American women as a whole actually managed to drop time vs time vs their seed times at this meet. Every other major nation added time. The worst performing major nation vs seed time was Australia. Whereas the American women dropped an median of .3% the Australian women added a median of .6%. That gap of .9% might not seem like a lot, but in a 55 second race that’s half a second.

Here the top 8 women’s nation’s performance vs seed. (top 8 as determined by this) (negative is faster, positive is slower)

The American men also performed the best vs their seed times, though the margin wasn’t as big as their counterparts.

An interesting detail in those tables is the count of data points. 496 women’s events to 550 men. Those counts aren’t representative of the total number of events contested at the Olympics. The Russian swimmers who were re instated weren’t on the FINA entry list I used. Also there were a few no times that weren’t included either. Those small details aren’t enough to overcome the fact that there were noticeably more men’s swims than women’s swims at the meet.

Here’s the top time drops in the whole field for the men:

The top time drops in the competition for the women:

All of the top  time drops came from swimmers who, while important to the spirit of the competition, were irrelevant to the actual competition for the medals. Instead I looked at the top time drops by percentage among swimmers who got a second swim in their event. Simonas Bilis‘s drop from 22.10 to 21.71 (1.8%) in the 50 free topped the men. The women were led by Mireia Belmonte Garcia who dropped from 8:27.94 to 8:18.55 (1.8%) in the 800 free.

Men’s top time drops (from swimmers who got a second swim):

Women’s top time drops (from swimmers who got a second swim):

8 largest time adds from men who got a second swim:

8 largest time adds from women who got a second swim:

Her 200 im semi was very good, but she added from that in the final.

Ye Shiwen should also be listed in the top add list for her 1.8% add to her seed time in the final.

The list was calculated by comparing a swimmer’s best time at the meet to their seed. I didn’t want controlled effort, “just make it back” prelim swims filling up the list. As it is, all the swims on the list represent swimmers’ best effort.

Why not just count a swimmer’s last swim?

I picked this method because it gives the benefit of the doubt to the athlete. If we’re going to judge based on times, we might as well use best times.

I think one of the most impressive time drops for a top swimmer was Katie Ledecky with her 100 relay splits of 52.64 and 52.79. Add a 0.5s correction and these times are 1.135% and 0.856% lower than her seed time of 53.75 and her seed time was a large drop from her previous best. If she had swum the individual 100 I think she probably would have made the finals.

But the USA has its trials too late!…

Yes, how much did we read this in the comments section before Rio? And where are all those people now?

Guessing his seed time must have gotten messed up or something, but still. It was nuts.

Seeing Missy’s name on there twice made me sad, but that’s a deceiving list of largest time adds, as I imagine some swimmers seeded in the Top 1-8 didn’t even place in the Top 16 in prelims to even merit a second swim; I bet those time adds were anywhere from meh to outrageous.