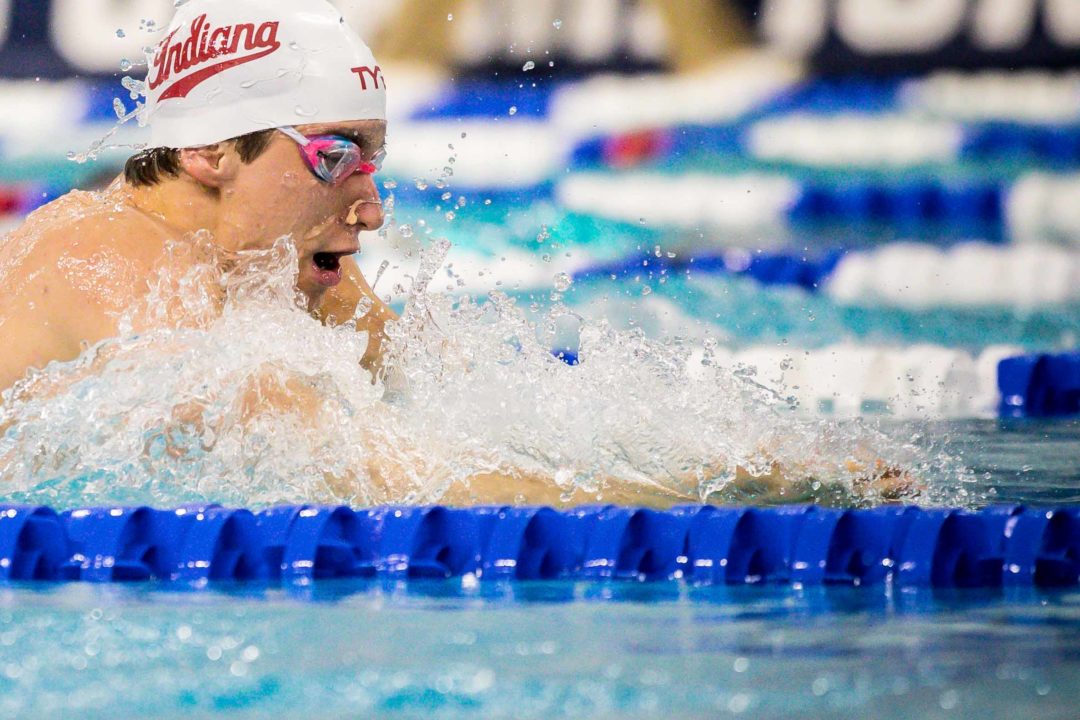 Ian Finnerty is a new addition for the Energy Standard training group, as he's one of the early returnees to the water at the Gloria Sports Arena in Turkey. Archive photo via Jack Spitser/Spitser Photography

The Energy Standard Training Group has resumed training in Antalya, Turkey. Head coach James Gibson, as well as 9 of his athletes, headed out to the Gloria Sports Arena last week after being forced to disperse in March.

Finnerty, who previously trained in the US at Indiana University and swam with DC Trident in the ISL season, is a new addition to the group.

During the 2019 ISL season, he earned the title of top male point scorer at the U.S. Derby match in College Park, Maryland. At that same meet he set a new American Record in the 50m breaststroke, becoming the first American man to go sub-26 with a time of 25.99 – this was later taken down to 25.75 by Nic Fink at the Las Vegas championship. He also holds American Records in the 100 yard Breaststroke (49.69) and 100 SCM Breaststroke (56.29).

During his stint at Indiana University, Finnerty was part of a power-house breaststroke squad, training alongside Cody Miller and Lily King. During his time with the college squad at Indiana, Finnerty won back-to-back NCAA titles in the 100 breaststroke in 2018 and 2019.

While Finnerty’s greatest successes have come in short course, at the 2019 World University Games he started to show his international promise in long course as well. He finished the 2018-2019 season with a 59.49 in the 100 long course meter breaststroke, which ranked him 3rd among Americans.

The remainder of the team’s training group, most of whom swim for the Energy Standard ISL team as well, are set to join the team over the coming weeks. With individual countries having differing travel restrictions in place, it means some will be staying put for now.

Such is the case with Chad le Clos who is unable to travel to Turkey and is currently training in his home-town of Durban, South Africa.

Gibson emphasized that in terms of the rest of the team joining their peers in Turkey, everything is being “played by ear” at present. He added that “It’s almost impossible to plan – we look at each individual case and if it works it works, we’ll get them to Turkey. If it doesn’t we’ll continue to support all our athletes regardless of where they are in the world”.

The group is training for 4 weeks and then will take a two-or-three week vacation to re-charge the batteries. Gibson said “we’ll come back in on September 1st and then start building towards ISL. That’s the priority.”

He also confirmed that they are “not planning to race before the ISL,” which means we won’t see any Energy Standard members at the upcoming Sette Colli meet in August despite foreigners being allowed to attend. The ISL is anticipated to have an October start date, with all athletes being isolated in a training camp. No official location for the event has been announced, but Australia has been the favorite since the plan for year 2 of the league was shifted in March to cope with the coronavirus pandemic.

Gibson reiterated that “fitness and conditioning” are now at the forefront of his program as they look to restart the Olympic season and prepare for next year. He added, “I’m very happy with my decision to close the program and get everyone home. It was challenging to get everyone going again and we still have huge challenges ahead with getting athletes back but we’re doing the very best we can, as every club in the world is doing, with what we have available.”

This is the future of swimming. Professional teams with great facilities. No brainer here for Ian. Would like to see more of these types of teams.

This isn’t “the future” until they prove that there’s a market to support it. The cost model of $10 million/meet, where the administrators are still making more than the vast majority of the athletes are, isn’t quite there yet, for me.

It may not be the future for you but more athletes are making more money then they did before the isl was around.

So… is he part of Energy Standard or is he just training there? If hes part of them, I haven’t seen him or them announce it via social media.

Peep the picture at the top of the article #cleargogglegang

I think swimswam did a short piece on those goggles after 2019 NCAAs.

Should do well with Gibson, a former elite breastroker.

If people have to quarantine before ISL meets, I’m very interested to see if a lot if swimmers with opt-out of the upcoming season. I imagine they will be able to continue training during the ISL quarantine, but it could interrupt the flow of their training with the club coaches and teams.

When are they announcing the new teams for 2020 season?