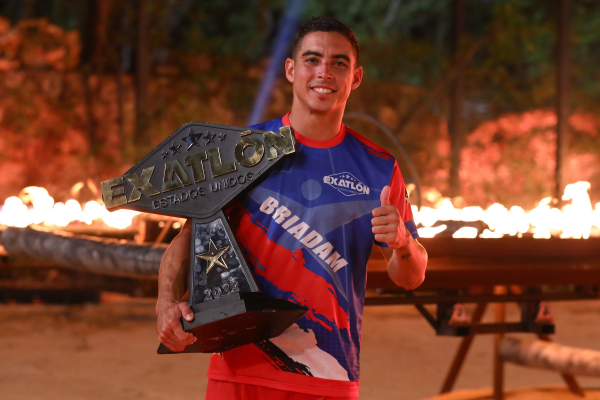 Amercan diver Briadam Herrera (above) was one of two $200,000 champion prize winners on the show Exatlón Estados Unidos on Telemundo. Current photo via Exatlon Estados Unidos

Diver Briadam Herrera walked away with a $200,000 grand prize, beating out, among others, a pair of professional swimmers, on the reality television show Exatlón Estados Unidos.

Herrera, who represented the United States at the 2017  and 2019 World Championships and who owns a pair of World University Games medals, was one of two $200,000 winners among 32 competitors on the 6th season of the Telemundo reality show.

The format originated in Turkey (though the Turkish version is now extinct) with versions in at least 8 countries around the world. Contestants compete in grueling obstacle courses multiple days a week over many weeks – the 2022 season had 94 episodes. Early in the season, each day sees one contender versus one celebrity, and the first team to 10 wins in a day wins that day.

Athletes are eliminated from each team

Eventually, the show moves to an individual stage, where the top 10 athletes compete to advance.

Aquatic athletes did particularly well in Season 6: three of the four finalists come from the pool. Besides Herrera, the diver, swimmers Isabella Arcila and Mateo Gonzalez were also finalists.

Herrera was born in Cuba but represents the United States internationally after becoming a citizen in 2014. He dove collegiately at Miami.

Arcila represents Columbia internationally and is the owner of 10 medals from the Central American and Caribbean Games. She competed at both the 2016 and 2020 Olympic Games. She swam collegiately at SMU, where she was an All-American and four-time NCAA Championship qualifier.

Arcila says that the show made her fall in love with sport again.

“My biggest takeaway from the show was that I had invested so much into swimming that it almost took all the fun away from it. Swimming became too serious to the point where I started measuring my self-worth based on how well I did swimming and that ruined the fun of it,” Arcila said. “So in Exatlon I just wanted to enjoy competition again and I did. It helped me regain my self-confidence as an athlete.”

Watch the season finale below:

Briadam was not just a Miami diver – he won 6 ACC Championships. Congratulations on this latest win.