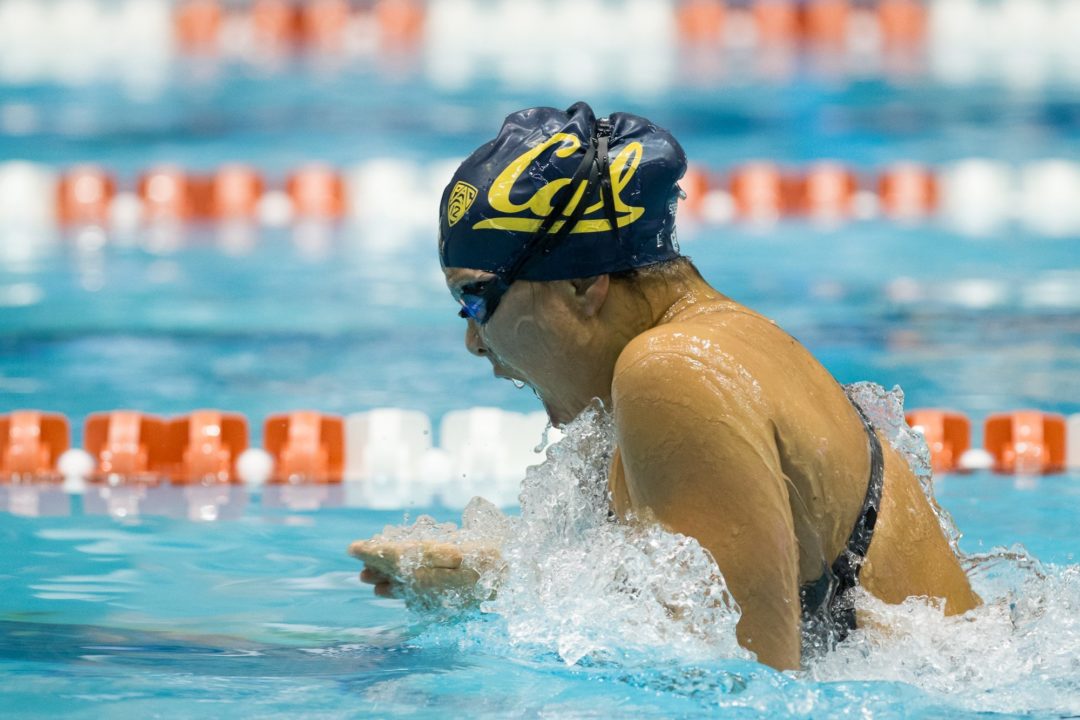 Update: While we cannot confirm the exact nature of the violation of team rules, we have talked to sources that we trust, who have described the transgression as ‘very, very minor,’ and shouldn’t affect Li’s ability to swim in any future meets.

As the Cal women snuck by Pac-12 rivals Arizona on Saturday, by a final score of 157-143, they were without one of their stars: sophomore Celina Li.

In Cal’s official post-meet press release, head coach Teri McKeever says that Li was held out of the meet for “violating team rules” without elaboration.

Li had a standout freshman season at Cal in 2013-2014, where she placed 3rd in the 200 IM, 8th in the 400 IM, and 31st in the 200 breast at the NCAA Championships. She also swam the breaststroke leg on the Cal 400 medley relay that placed 5th, though with Marina Garcia swimming better this year, Li may cede that relay spot to her Spanish teammate, at least in finals.

Cal will have another tough double next weekend, though it will be at home, as they welcome in USC and UCLA, and then will take two weeks off before their big head-to-head with arch-rivals Stanford.

Nice try Swimmersear but it’s obvious you are a Cal fan fan trying to create controversy by making an asinine comment. You of course realize the women who chose to work with Teri and swim for Cal understand that swimming is a part of their lives and that selecting a college program is a “rest of your life” decision. To believe you were making a serious original comment would imply you are one of those sad sacks who peaked in high school and are relegated to remembering the good old times in high school as you pump gas. (And this is from a Stanford alum).

You honestly believe that three top ten recruits (Franklin, Li, and Baker), all of whom already had close friends/former club teammates at Cal and multiple offers from top ten programs, blindly chose Cal with zero discussion about which events they might swim in duals and NCAAs?!? Nobody at that level, with junior and senior national team experience and multiple attractive other options, is somehow being hoodwinked into joining a program against their will without sufficient information about what to expect in and out of the pool.

Todd Schmitz and David Marsh have coached alongside Teri McKeever and would never steer star swimmers somewhere they wouldn’t be treated fairly and there wasn’t “equity and balance”. The Marsh family was in… Read more »

DuckDuckGoose, you are brilliant. Thank you for that.

Is it at all possible that Miss C.Li showed disregard for team rules because missing a meet where you’re placed into events that nobody else can do or nobody else wants to do isn’t such a big deal. C.Li is an IMer, sprint (maybe middle distance) freestyler – and yes she can do it all. And yet there she is swimming the thousand, the 200 fly (OK not such a big stretch) and the 200 breast. It’s the old unfortunate practice, that’s gone on at every level, of placing the best (or one of the best) swimmer on the team into the event that the team is weak in. Yes, it happens. In fact, at times, it’s necessary. But nowhere… Read more »

I’m not sure what events you think Missy should do. She doesn’t have the starting speed for the 50, and the schedule makes 2free/1bk or 2bk/1free a pretty brutal double.

Also, they don’t train for dual meets: they build their program around what they will swim in March.

Hey Braden, that links me to last year’s meet. I don’t think I saw an article on the Cal-Zona meet.

Ya know, you guys are right. It somehow got missed on our calendar. We’ll do a recap now. Thanks for the catch.

Nowhere else to put this… so…

Any news on Maddy Schaeffer?

Hmmm. That article is not showing up on my mobile… weird.

Should clarify… the link works and I see the artivle… but it’s not showing up on the news feed on my mobile version of the site.

She threw a pineapple at a water polo player’s head.

You like CAL swimmers. That makes you a CAL fan. Nice try.

If she were a UVa swimmer this sort of non-news would be much more entertaining.

I am glad the article now begins with emphasis that this was a very very minor thing, and not worth more of a look…let’s keep moving onto something better than this please and all the best to Ms. Li.