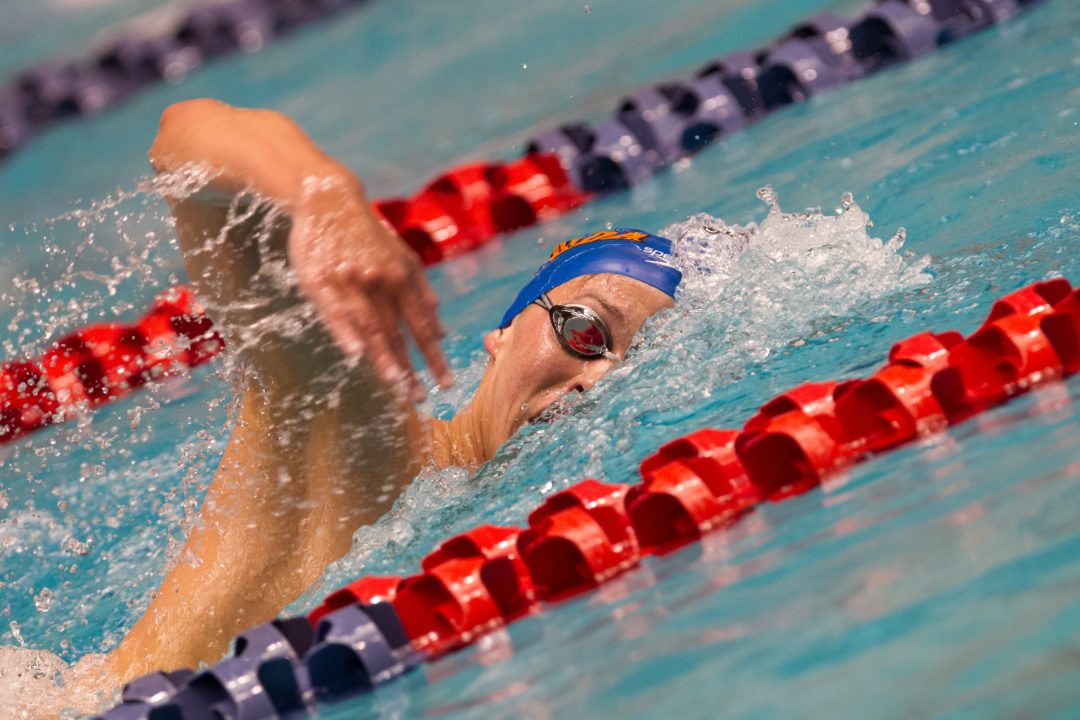 Nicholas Caldwell is taking a step back from the Florida Gators after an injury-plagued first three semesters in the Swamp. (Photo Courtesy: ©Tim Binning/TheSwimPictures.com)

Caldwell took his exit shortly before the recent Ohio State Invite, and says that he’s going to take the break to weigh his options with his family before deciding to move forward. We reached out to Florida for comment, but received no response.

Caldwell was the #6-rated recruit in the high school class of 2011, coming from the big-time distance program at the Sarasota YMCA. In his year-and-a-half with the Gators, he battled several injuries including a bad back problem coming out of high school; for the first part of this season, he was swimming in a cast as well (there’s been no official reveal about what the nature of that injury was).

Despite the adversity, however, Caldwell showed how dangerous he can be when he’s healthy. He swam a 15:15 in the mile and a 4:21.0 in the 500 free: two events where training interruptions can be hugely difficult to recover from. He also split a 1:36.3 as a member of Florida’s 7th-place 800 free relay at last year’s NCAA Championships.

Caldwell, if he chooses to continue his career, will be a hot-ticket for a possible mid-year transfer, if not for next season. He has a ton of potential, and one of his former Florida teammates that we spoke with described him as both being “really serious about working hard” and “a genius”. He should have no shortage of offers if he chooses to transfer.

This is the second such situation we’ve seen this year that will have a big impact on the top-10 of the men’s race at NCAA’s; Texas’ All-American breaststroker/IM’er Nick D’Innocenzo, the 2012 Most Outstanding Swimmer from the Big 12 Championships, left that program this semester as well.

he was injured before going to FL

There’s no reason to attack the coaching staff or the athletes especially if you don’t know his reasoning for choosing to leave. That’s not really any of our business anyway. I wouldn’t exactly call him ruined. Seems a bit dramatic. Underachievement can be just as much the fault of the athlete, not that you’re actually seeing any underachievement right now. Coaches work to make their athletes good people and good students, not just swimmers. You can’t blame a coach for poor decisions someone made in the past. I know from experience how much we are responsible for our own actions. Maybe you see what the swimmers go through everyday as “abusive,” but that’s because you’re obviously pretty biased towards the… Read more »

What happened to Nick at Texas? Why did he leave the program with only one year of eligibility left?

watched nick swim since he was 8 years old. a great kid and great competitor. i wish him good luck in his future endeavors.

I’m surprised no one has said anything about Mattie Kukors leaving ASU at the beginning of the year. Spent only one season with them and broke both IM school records in the process. Not sure what happened with her at NCAAs last year though

Hopefully, Caldwell finds a post Troy experience the likes of Townsned, Burckle and Vollmer. As an All American who swam four years for Troy; I agree with the idea of the toughest program physically, mentally and emotionally. However, there are a lot of swimmers who leave that program ready for the Navy Seals but who never came close to achieving their human potential in the pool. The same workouts that push emotional and mental toughness on a non-stop basis also destroy fast twitch muscle fibers, shoulders, knees, and worse. The emotional toll on a swimmer who is very self motivated does not respond well to comments such as “you are an embarassment to your famiy and should kill yourself”. Lochte… Read more »

The quote about killing yourself over poor swimming is pretty inflammatory, to say the least. I hope this is something the author directly heard, not hearsay, since if true, it is despicable.

I can assure you that has never been said

I wouldn’t be so sure. Almost every swimmer there has had their fair share of emotional abuse. I personally know 3 girls who have left the program in the past few years and they have horror stories.

Well I’m a swimmer now and I can tell you that I am so sure.

Thank you “Former Gator”. That’s exactly what I’m talking about and, OH, I forgot to add the phrase “eating disorders” to the list of things that happen on a regular basis to athletes in the Florida program. It is a complete and utter joke that Florida and Troy’s apologist take credit for the successes that the likes of Townsned, Burckle, Vollmer and others have enjoyed since they escaped the UF training program. Instead of simply focusing on being the best coaches they can be for the athletes they recruit, Troy and his staff seem to be more interested in being regarded as the toughest coaches in the history of college swimming. The results and well being of many of their… Read more »

Who said anything about the people you mentioned? Now youre just looking for a place to criticize. At least keep things relevant and troll elsewhere. The things you speak of happen all over. If there’s any rumor it happens at Florida some bitter people act like the world is ending.

The “eating disorders” can happen at any program but when you start out your first meeting of the year with the girls telling them that in a few months time you want them at 16% body fat, it does not help. Also telling the girls that they don’t have ” World class swimmer bodies” doesn’t help.

Athletes who sign with a school are committing to be in the best shape and abide by their standards. Yes it can be hard emotionally because some programs can be brutally forward but if a school has a reputation for being that hard then don’t sign up for it of you can’t handle it.

This isn’t “a tough standard”, especially if that is what is being said. Everyone has their own ideal body weight and telling people they have to get to a certain point is nothing short of ridiculous and potentially hazardous to one’s health. A school should have a rep for being hard in the pool and weight room, not on girls when they step on a scale.

Having success in swimming goes far beyond the hours you spend in the water.

There’s no need to try and preach to me, Lneidigh, about where work is done, just know you have to understand someone’s psychology and physiology before you can tell her to lose weight. Good luck to with that logic of yours…

That logic of mine is doing just fine. Understanding we have our differences it was really uncalled for to expose me as batman on the internet.

The comments about the coaches’ egos and their supposed concern with the program’s reputation to explain the workouts are amusing. Do you really think a group of world class coaches really care what anyone thinks about them or their program? They are doing what they think it takes to be successful. And they’ve had success. That’s undeniable. Wondering whether or not the high intensity of training there works for every athlete is the same as having a sprint program trying to develop 4im swimmers. No program is “one size fits all” and as such their methods may not work for everyone. That’s true regardless of the program under speculation.

But the point of this article is Nick, who is… Read more »

i remember watching Nicholas Caldwell at YMCA Nationals every spring. He was an impressive distance swimmer, but not overly big. So it is possible he reached his potential…hopefully not and he comes back from these injuries faster