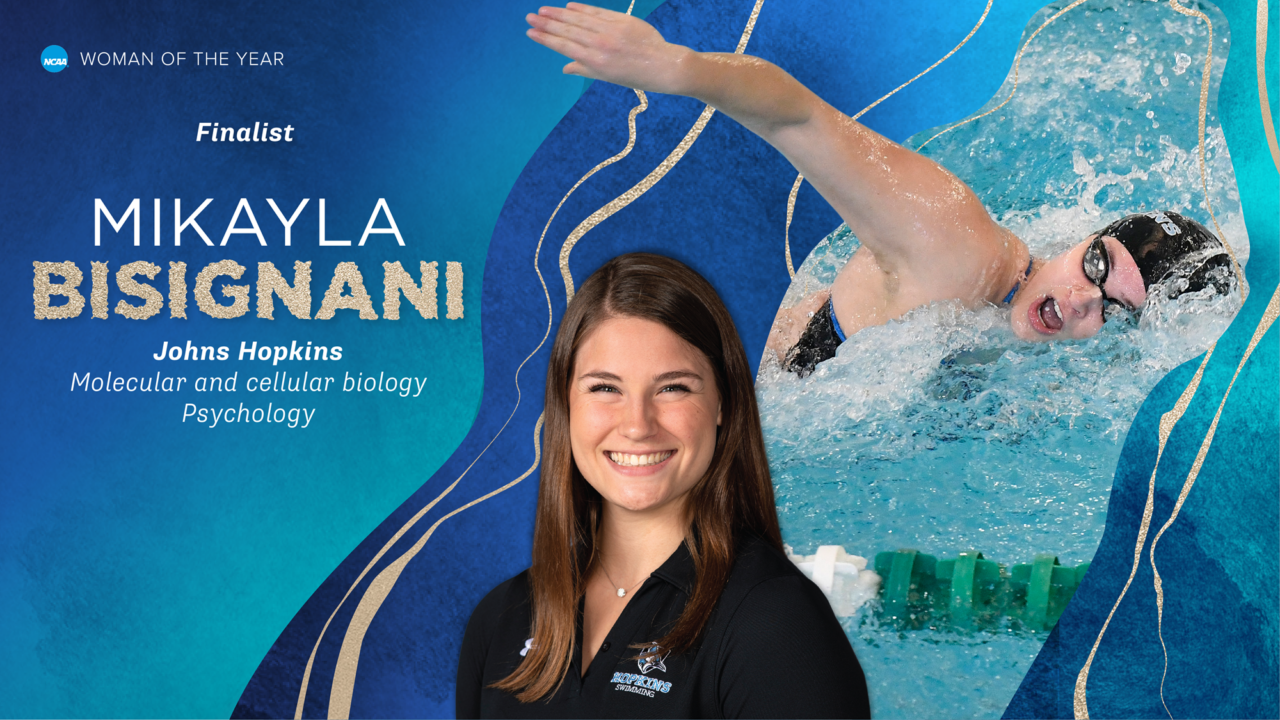 Mikayla Bisignani, who in 2019 scored at both the NCAA Division III swimming & diving championships as well as the track & field championships, is one of 9 finalists. Current photo via NCAA

Division II McKendree University has announced the addition of Cade Brooks and Kirk Brotherton to their roster for the 2022-2023 season.

Sweet was diagnosed with Stage 3 Hodgkin’s Lymphoma in January 2021, received chemotherapy until August 2021, and had a stem cell procedure in March 2022.

Johns Hopkins University swimmer Mikayla Bisignani has been named as one of 9 finalists for the 2021 NCAA Woman of the Year.

Bisignani, who was scheduled to swim her senior season last year for Johns Hopkins, is also a member of the school’s outdoor track & field team.

She is the only two-sport athlete among the finalists, with three coming from each of the NCAA’s three divisions.

At 7:30 p.m. Eastern time Tuesday, Nov. 9, the finalists and Top 30 honorees will be celebrated and the 2021 NCAA Woman of the Year will be announced during a virtual awards ceremony. The show will be streamed on the NCAA Twitter account and ncaa.org/woty.

The NCAA Woman of the Year Award was established in 1991 and is considered one of the highest honors a student-athlete can earn from the NCAA. A hollistic award, the honor recognizes female student-athletes who have exhausted their eligibility and “demonstrated excellence in academics, athletics, community service and leadership throughout their collegiate careers.”

An excerpt from Bisignani’s personal statement:

“As a collegiate student-athlete, I was awarded several honors. However, none of these awards comprise the mosaic of who I am. While my success could be measured in times or distances, the numbers on the board were not as defining as the lessons I learned through hard training. I learned how to set high goals yet remain process-oriented and view failure as a chance to improve by learning new strategies.”

Bisignani was a two-time CSCAA All-American as a swimmer, including winning first-team honors in 2019. In 2019, in addition to First Team All-America honors in swimming, she placed 13th at the NCAA Division III outdoor track & field championships in the discus, helping her team to a program-best third place finish overall.

The Latrobe, Pennsylvania native double-majored in molecular and cellular biology and psychology while at Johns Hopkins.

Other 2021 NCAA Woman of the Year finalists

She gonna have a real good medical school personal statement