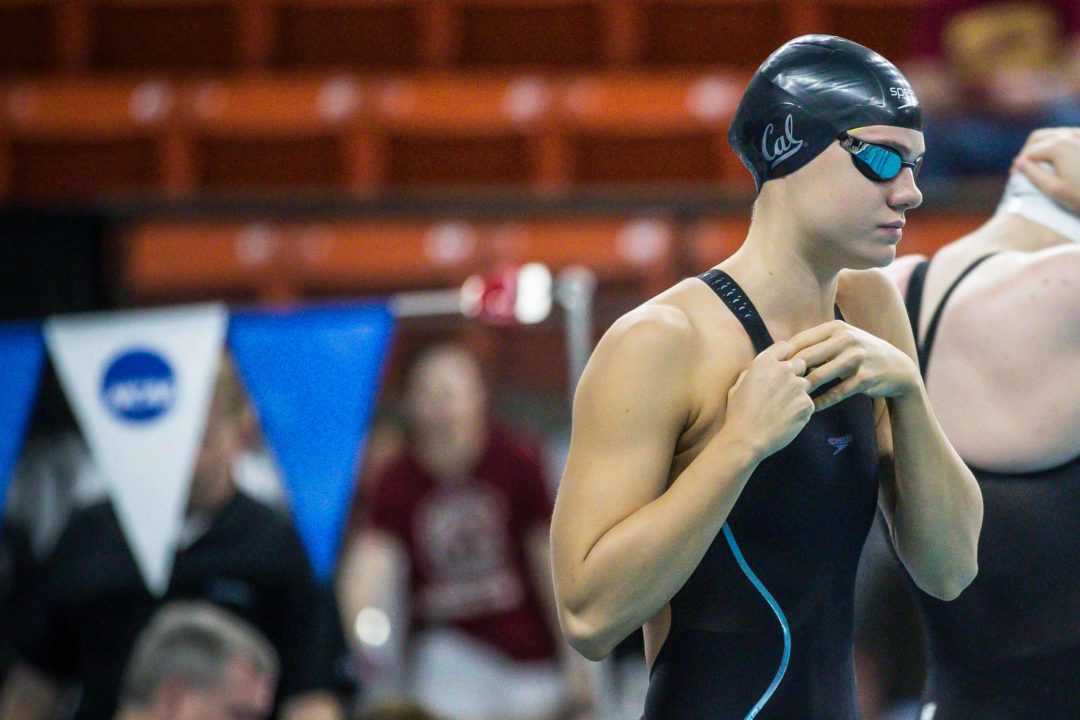 Alicia Wilson, the 2019 World University Games gold medalist in the 200 IM, swam a 2:13 in the same event at a Monday morning dual meet. Archive photo via Jack Spitser/Spitser Photography

Both Cal and UCSD had academic and administrative holidays on Monday in celebration of Veterans Day, and the women’s swimming programs took advantage of the day off to race an unusual Monday morning long course dual meet.

“I was happy with our performances today,” head coach Teri McKeever said. “Everyone got in 2-3 good long-course events, and I think we learned a lot after a good weekend with some ocean training and spending time together.”

There was a lot of good racing on the day, but the highlight was a 2:13.15 in the 200 IM from Cal’s Alicia Wilson, who was the World University Games gold medalist last summer representing Great Britain. Her splits:

The back-half of her race was almost the same speed as when she won that World University Games gold medal in Naples.

With a number of Olympians and potential Olympians on the Cal roster, there were a number of highlight performances at the meet. Senior Abbey Weitzeil won the 50 free in 24.98 and the 100 free in 54.37, while also swimming a 1:03.94 in an off-event, the 100 fly.

The race-of-the-day came in the women’s 200 free, where sophomore Isabel Ivey and junior Robin Neumann were locked in a big battle. Ivey jumped out to a lead at the halfway mark and held that lead for most of the race, but in the waning meters, Neumann overtook her to win 2:00.22 to 2:00.27.

Sophomore Ema Rajic swam the 3rd-best time of her career in the 100 breaststroke in a time of 1:09.81. Her best time is just .19 seconds faster, and this is her first time sub-1:10 since the summer of 2017. Cal has had a hole in the breaststrokes for a few years now, but Rajic’s presence has stabilized that group a little for the Golden Bears.

Rajic finished 2nd in the 200 breaststroke in 2:34.69 behind UCSD freshman Katja Pavicevic, who gave the Tritons their only win of the day. The Canadian broke the school record in 2:31.16, beating out the old record of 2:34.51.

Cal’s next racing will come after Thanksgiving at the blockbuster Minnesota Invitational from December 4th-7th, while UCSD’s next swimming will be at the A3 Invite from November 22nd-24th.

SAN DIEGO – Taking a break from the collegiate distances to compete in long-course meters, Cal traveled to UC San Diego for a 12-event dual meet Monday. The Golden Bears won 11 events to earn a 138-82 victory over the Tritons.

“I was happy with our performances today,” head coach Teri McKeever said. “Everyone got in 2-3 good long-course events, and I think we learned a lot after a good weekend with some ocean training and spending time together.”

Cal returns to short-course yards in three weeks for the Minnesota Invitational Dec. 4-6, then will have another long-course meet Dec. 7, also in Minneapolis.

LA JOLLA, Calif. – The UC San Diego women’s swimming and diving team wrapped up a busy weekend racing against Cal at Canyonview Aquatic Center. The swimmers swam long course against the Bears. While today’s times do not qualify swimmers for NCAA’s, they can qualify swimmers for USA Swimming Open and Olympic Trials.

The Tritons raced well despite racing on short rest and going up against one of the top teams in the country. Ultimately, Cal came up on top with a score of 138-82.

Katja Pavicevic secured a US Open qualifying time in the 100-meter breaststroke with a time of 1:11.96. Pavicevic went on to win the Triton’s first event of the day in the 200-meter breaststroke with a school record and US Open qualifying time of 2:31.16. She wrapped up the day with her second school record and third US Open time in the 200-meter IM with a time of 2:20.27.

Jordan Phillips had an impressive swim in the 100-meter butterfly. Her time of 1:03.27 beat out a slew of Cal swimmers.

The Tritons have the week off before competing at the A3 invitation November 22-24 in Los Angeles.

Good swims! Assuming they were suited?

Suited but no shave or taper

I didn’t see any armpit hair….I think they shaved. Lol!

Vote Up3-6Vote Down Reply
On Fleek

not suited it seems — if this pic of the UCSD team’s anything to go by?

some solid times either way for this time of the season

I was there. They were all suited. Maybe an old pic or before warmup?

Yeah it looks like it could be a sort of stock photo of the team the media department uses.

Crikey MATE! Very fast swimming from Wilson in November. I would love to see BS take her to Tokyo in this event, 2:08 is the “A” cut and 2:11 the “B”. However, I have my doubts as Wilson swimming in the US means she isn’t one of BS favourites and they seem use ‘discretionary’ picks to choose their favourites who are at Loughborough and Bath. Not letting any young talent on the team

I think that British swimming do see her as someone with potential otherwise they wouldn’t have chosen her to compete at WUGs. But I do agree that she will struggle to qualify unless she has a stunning swim or she beats O Connor. If she wants the best shot at qualifying I think she needs to develop her backstrokes a bit more as British swimming are more likely to choose her if she is more versatile.

I don’t think being based in the US will be a huge issue. Hasn’t bothered them with Szaranak, Wallace, Hopkin, Thielmann etc. Wouldnt put beating O’Connor past her, unless SMOC returns to somewhat close to her best – Only been under 2.10 once or twice in the last couple of years I think.

Is her bad health to blame for her relative loss of form over the last few years? /is she doing any better? Between 2014-2016 she was electric and I miss it aha. Is it only 200im and 100 breaststroke for her from here on?

I genuinely have no clue about future plans, but she is in a really good IM group at Loughborough now so hopefully it reignites something. She looked in good physical shape last weekend at Midland SC, and appeared to be racing happy, so it could all come back together again. Hopefully it does because she is a very special athlete – Her 2.06 in Rio was a remarkable swim.

I think right now Siobhan is in the best place mentally since Rio. I think now it’s about keeping her ulcerative colitis under control and embracing a fresh start at Loughborough.