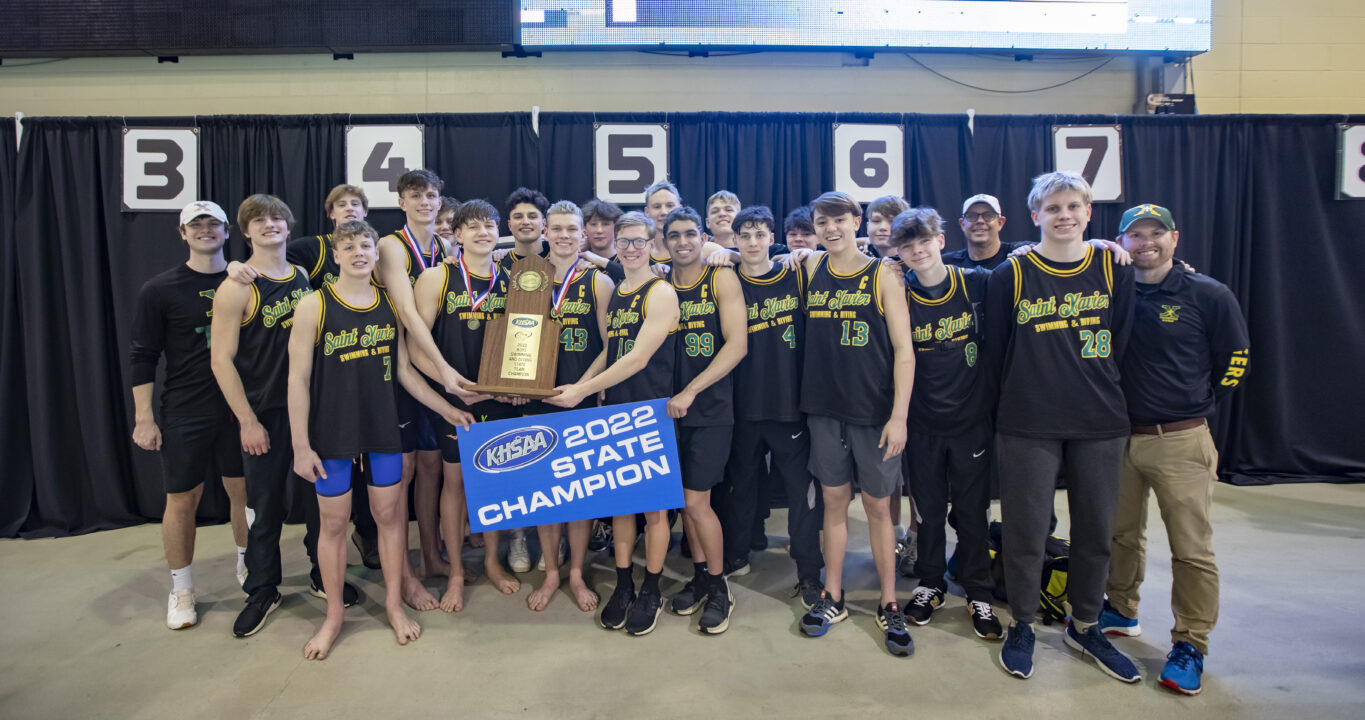 Texas recruit Will Scholtz won all 4 events he swam in, breaking the KHSAA records in all 4 as well. Current photo via Chip Dumstorf

Scholtz went on to win the 100 breast in 53.88, also downing the state record, which stood at 54.36 by Keefer Barnum from 2017. The swim was just a tick off Scholtz’s personal best, a 53.61 which is also from the Winter Juniors meet in December.

Charlie Crush, a St. Xavier senior who will be starting his collegiate career at Louisville in fall, also helped lead the way for his team, swimming 2 individual events and 2 relays, winning a title in all 4.

Crush’s first individual title came in the 100 fly, touching in 47.49. He was out the fastest of anyone on the first 50 of the race, but it was the 25.09 split he posted on the 2nd 50 that allowed him to pull far away from the field, touching first by 2.19 seconds. The swim was off Nicolas Albiero‘s KHSAA record of 46.29, but it was a new personal best, clipping his previous mark of 47.68, which he set at the 2021 Speedo Winter Junior Champs East meet two months ago.

He would then go on to win the 100 back in 47.32, narrowly missing his personal best of 47.10, also set at Winter Juniors East two months ago. Whereas it was the 2nd 50 of his 100 fly that really sealed the deal for Crush, this time it was the 1st 50. He opened up the race with a 22.78 split, establishing a lead of nearly one second over everyone else.

Johnny Crush also took 2nd in the 100 back, behind Charlie, swimming a 48.56. Luke Thomas, another member of the record-setting relays, was the 100 free champion, swimming a 45.46.

STX also picked up a win in diving, where Brandon Anderson racked up 509.10 points to win the title by an enormous 60-point margin.

Henry Clay senior Jackson Millard won the 500 free decisively, clocking a 4:28.01. The swim marked a personal best by 0.98 seconds, downing the time he swam at his regional meet in early February.

Will scholtz is just so darn cute

THE St Xavier HS is in Louisville. 😊

Which Albiero record fell? Looks like his 100 fly, the only one mentioned, wasn’t broken.

You are correct, it was not broken.

Can someone explain to me how they compete at Kentucky high school state championships when they’re based in Ohio?

There is a st. Xavier in Louisville

They’re two different St Xaviers. This one is in Louisville.

FYI, St.X in Ohio will go down this year for the first time in a long time. Look out for Dublin Jerome and Beavercreek.