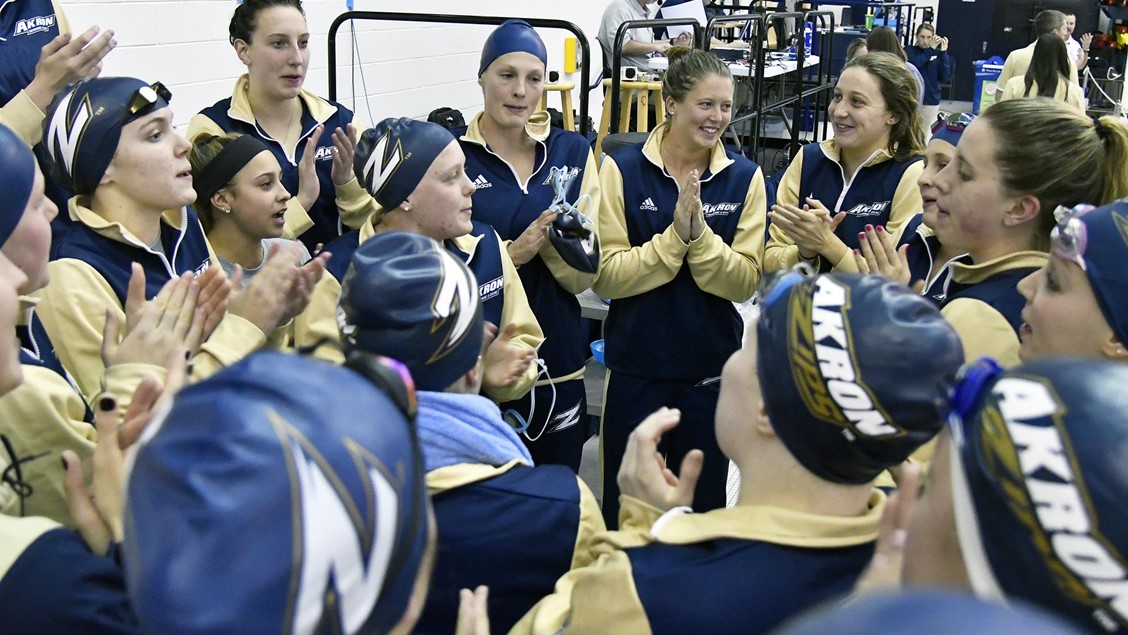 Day 1 of the 2020 MAC Championships kicked off tonight with the 200 medley and 800 free relays. Six-time defending MAC champion Akron leads the meet through day 1, after winning both of tonight’s events. Akron won their 7th consecutive MAC title in the 200 medley relay tonight, clocking a season best 1:37.91. Lauren Cooper led the squad off in 25.17, and was followed by Andrea Fischer in 27.51, Sarah Watson in 23.13, and Morgan Waggoner in 22.10. Relative to the rest of the field, Sarah Watson‘s 23.13 fly split is what set the Zips apart from the field. Watson led the butterfliers in the field by .74 seconds with the split. Morgan Waggoner‘s anchor split of 22.10 tied for the best in the field with runner-up Buffalo’s anchor, Katie Burns. Burns is the younger sister of Buffalo alum and school record holder Megan Burns, who was one of the top swimmers from a mid major program (from a conference outside the ACC, Big Ten, Big 12, SEC, and Pac-12) in the NCAA during her Buffalo career.

Akron went on to win their 3rd consecutive title in the 800 free relay, with Sofia Henell leading off the team in 1:48.93. Akron was in 6th when their 2nd leg, Paulina Nogaj, dove in. Nogaj split a 1:46.51, bringing the Zips into 1st place at the halfway mark. It was Sarah Watson, Akron’s 3rd leg, that cemented the victory for the Zips, throwing down a 1:45.25 for her split. Wats0n’s split gave Akron anchor Jackie Pash a little over a 6 second lead when she dove in. Pash brought it home in 1:50.44, getting her hand on the wall for a 7:11.13 final time, taking the title by 4 seconds. Watson and Nogaj had the fastest and second fastest split out of the entire field. Both swimmers were also members of Akron’s MAC-winning 800 free relay from last year, which also set the MAC record with a 7:06.81. Camila Lins de Mello, the MAC record holder in the 200 free, led off the Miami (OH) relay with a 1:46.71, which was the 3rd fastest time in the field. Lins de Mello has a personal best of 1:45.47, which is the MAC record.