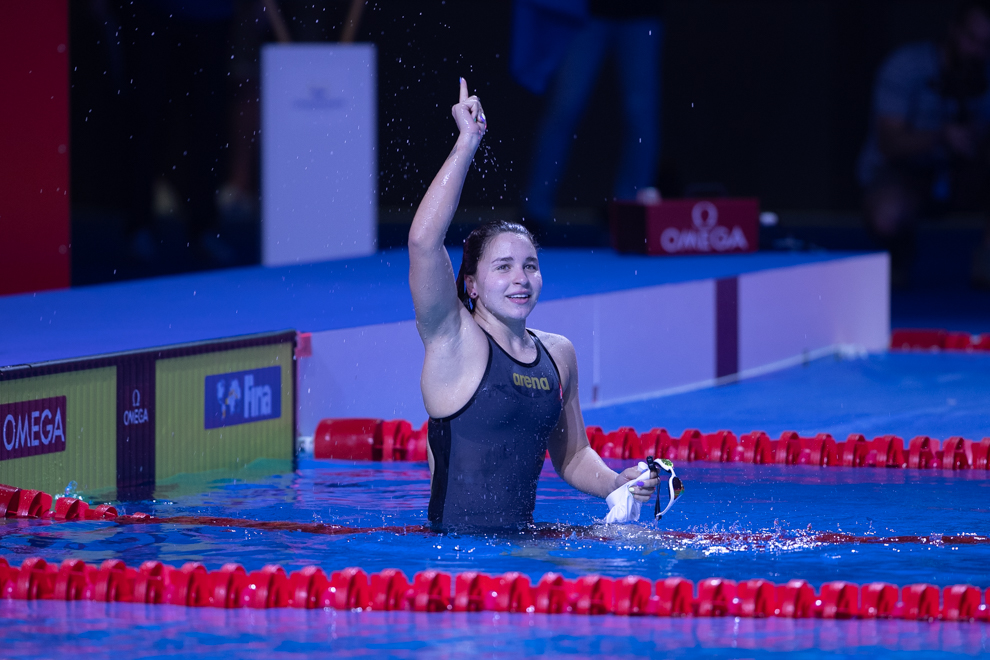 Teenage Ajna Kesely followed up her 800m free silver from Glasgow with a national record in the 1500m free at Hungarian SC Championships. Archive photo via “Rafael/Domeyko Photography”

The 2019 Hungarian Open Short Course Championships wrapped up tonight in Kaposvár, but not before the nation’s powerhouse Katinka Hosszu collected one more gold medal to add to her 9-medal haul through Friday.

Tonight, Hosszu captured the top prize in the women’s 100m fly, producing a time of 58.68 for the win. Hosszu’s time represented the only result of the final to dip under the 59-second threshold, although 15-year-old Panna Ugrai was within a second, stopping the clock in 59.45 for runner-up.

Hosszu raced in 2 more events, but fell just shy of gold in each. In the women’s 50m breast, it was Ivett Szurovcsak who got to the wall first, producing a winning effort of 30.70. That held off Hosszu who touched .22 later for a time of 30.92. For Hosszu, her time marks just the 3rd occasion in which the Iron Lady has delved under the 31-second barrier in the short course meters format.

Also in the water tonight was 200m fly world record holder Kristof Milak. He doubled up on his 2fly victory earlier in the meet with another win this evening in the 100m fly. The 19-year-old earned a time of 50.39 to get the edge over Szebasztian Szabo who touched in 50.63.

Milak’s time represents the 2nd fastest of his young career, sitting just .01 outside of the 50.38 produced last year. Of note, national record holder Laszlo Cseh was also in the race, with the 34-year-old rounding up bronze in 51.26.

A national record did bite the dust before all was said and done, courtesy of 18-year-old Ajna Kesely. Kesely took on the women’s 1500m free tonight where she notched the top time of 16:04.13. Not only is that a lifetime best for the teen, but the mark also checks-in as a new Hungarian standard, overtaking Hosszu’s prior time of 16:04.85 from 2016.

Kesely could be the next Katinka but to be truly great, she has to champion in the 200 and 400m IM.

Little Kesely is so sweet. Wanted to continue the race after hitting the wall with a NR. She is really not a SCM specialist.

Hosszu: 5 different strokes, from 50 to 400 metres. “The most versatile swimmer in the world, male or female” as Rowdy said 5 years ago.

Maxim Lobanovszkij with a 20.68 lead-off in the 4*50 free relay, also NR, I believe. Inching closer to the big boys too

Kids, today… Don’t know what they are doing. No respect to legends. So Hosszu doesn’t worth even junior record at most “iron” event. What a petty.
Congratulations to Ajna. That is the Hungarian swimmer the media should focus at.

A little happiness for you at last :). You know well that Hosszú has never been a long distance swimmer, she held the SC record so long because the others did not frequent SC on this distance. There is little or no doubt that Kesely is the no 1 Hungarian in long distance, no 2 is Kapas, but she is more or less abandoning long distance free and focuses on 200 fly. To put in perspective, the present 16:04 SC record is still 19 sec behind the LC record of Kapas. Kesely has the potential to swim around this time in Tokyo.

Little?! It was huge 😀
Dear OCTOPUS, you and Mr. Brownish are the last people whose patriotic feelings I want to see hurt. To all other Hosszu’s blind admirers I just want to open their eyes on some facts that may escaped their attention. Just for education purposes only. In no way their love gets shaken after that. Because it is like a steel tempering: the more negative facts they learn the stronger their love becomes.
You are right that Mrs. Hosszu isn’t a long distance swimmer, but nevertheless this fact doesn’t stop her to compete for money at long distance events at World Cup when children are in the pool.

No, you do not hurt my patriotic feeling. Kesely and Kapas are not less important for me at all. I shall be absolutely delighted if they perform well. A medal would be great but it is not easy. Kesely will not swim the same races as Hosszu. 200 fly is more problematic. It is wide open and anything is possible. Hosszu may or may not .decide to give a try. .

Depands on the others in 200 IM but I think she’ll try it.

Hosszú will not risk her 200IM gold for the fly. The 100 & 200 back fits well to the IM events in the olympic programme, so even though she struggles now in these races, that’s her only option for auxillary events with a medal chance.

Hard to say. She started her dedicated training regime several months ago, if not last year. At the moment I don’t see any medal chances in back. On the other hand, she likely needs a sub 2:07 performance to defend her 200IM title. No way that she would jeopardize that imho, not even if she only needs a 2:08 effort in the 200 Fly semi.

Patriotic fact that Katinka now holds only 15 NR in SC. Otherwise as a radiologist I can’t be too blind 🙂

Oh, that is how you see the “iron” stuff inside hosszu. That gives you a huge advantage and explains why people with naked eye have problem to see that.

12 particularly. The rest is correct.

Did you know? Of course not. They don’t teach you such things in bucuresti.
http://www.americanhungarianfederation.org/FamousHungarians/olympic_1896.htm