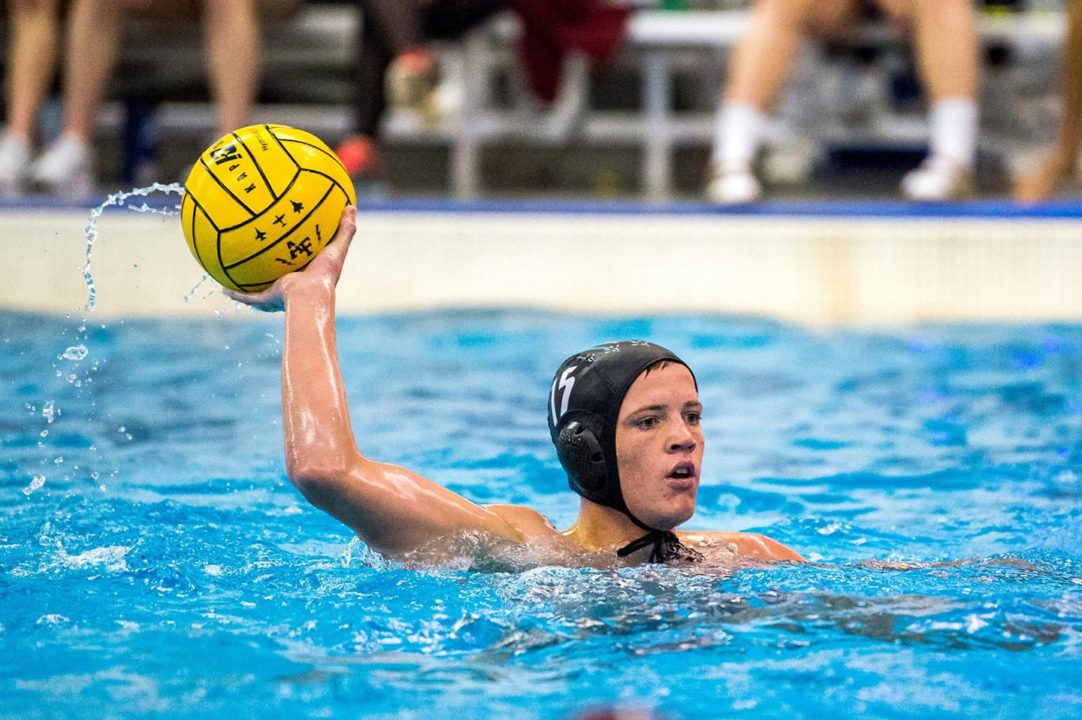 Harris scored on a five-meter shot and Fuller found the back of the net on the power play as the Falcons had a 10-9 lead entering the fourth. Snyder put the Falcons up 11-9, but LMU roared back to take a 12-11 lead. Fuller, with an assist from Snyder, tied the game with 4:06 remaining. Hires gave the Falcons a 13-12 lead with 15 seconds remaining, but LMU tied the game three seconds later. Snyder’s shot, in a 7-on-6 situation, went just wide at the buzzer. Fuller netted the eventual game winner, from Henry Yavitt, at 2:41 of the first overtime period. Fuller then set up Snyder with 53 seconds left in the second overtime to seal the win.

“It was a great team win,” head coach Ryan Brown said. “We had to overcome some adversity during the game, but sticking together as a team is what got us through.”

In the second game, Snyder scored a career-high eight goals, but LMU rallied for an 18-17 overtime win in a non-conference game. Air Force again scored first as Snyder scored from Fuller. Two more by Snyder, and one from Harris, gave the Falcons a 4-1 advantage midway through the first quarter. Fuller gave the Falcons a 5-1 lead late in the first, but LMU came roaring back to make it 5-3 after the first eight minutes. LMU scored four quick goals in the second for a 7-5 lead. Gavin Jones scored late in the second as the Falcons trailed 7-6 at the half.

Goals by Harris and Snyder in the third tied the game at 8-8. Hires scored twice late in the third and Jones added another, but the Falcons trailed 12-11 entering the fourth quarter. Snyder and Ian Christie each scored twice early in the fourth as the Falcons built a 15-13 lead with four minutes remaining. The Lions battled back to tie the game at 15-15 and force overtime. Each team scored a goal in the first overtime with Snyder scoring the Air Force goal from Harris. The score remained tied at 16-16 until late in the second overtime. LMU scored two goals in the final two minutes and Snyder scored for the Falcons in the final 10 seconds to make the score 18-17. Junior Anthony Tolbert made 11 saves.

In addition to Snyder’s eight goals, he added two assists for a career-high 10 points. Snyder filled up the stat sheet by winning five of the six sprints he took, drawing four exclusions and having three steals. Freshman Ian Christie had a career high three points (1-2-3). Fuller (1-2-3), Jones (2-1-3) and Harris (2-1-3) all had three points as well.

LOS ANGELES – LMU and Air Force proved to be good matchups for one another as the two teams played a pair of games on Saturday that both need extra time to determine a winner. In the first game of the day, Air Force used overtime to win, 15-13, and earn the conference win. Then LMU responded in the second game of the day, winning 18-17 after regulation ended with the game tied at 15-all.

LMU fell behind 2-0 before Jonny Rimlinger and Joseph Shaw each scored to even the game. The Falcons then jumped back on top by two, but Joseph Cavazos scored on LMU’s final possession to make it a 4-3 score after one period.

The second quarter started with an Air Force goal, but was all Lions after that. LMU scored four of the quarter’s final five goals to give the home team a 7-6 advantage at the half. Cavazos scored three times in the period, with Shaw and Rimlinger each adding their second of the day to push ahead.

The Falcons responded in the third with four of five goals, as only Tyler Harvey scored for the Lions.

Air Force took a goal lead in the fourth quarter with 4:06 to play. Neither team scored for the next three-plus minutes before Jack Baumgardner tied the game with less than a minute to go for his second goal of the quarter. The Falcons pushed ahead with 15 seconds on the clock, but Rimlinger wasted no time to tie the game and force overtime just three seconds into LMU ensuing possession.

LMU was unable to score in the extra sessions, as Air Force added a goal in each overtime period to take the game, 15-13.

The Lions had to erase an early deficit in the second game of the day, as LMU fell behind 5-1 in the first four minutes. Goals by Daniel Roth and Jonny Rimlinger to close out the quarter allowed the Lions to chip away in deficit.

With goals by Roth and Joseph Cavazos to open the second quarter, the Lions evened the game at 5-all less than two minutes into the period. Air Force stopped the run of four unanswered before Roth and Cavazos gave LMU the halftime lead with goals in the final minute before intermission.

Each team scored five goals in the third quarter coming out of halftime. LMU had two come from both Cavazos and RImlinger, with Baumgardner also finding the back of the cage.

Air Force opened the third quarter with the first three goals of period before Joseph Shaw put a stop to the run. The Lions were able to force overtime as Rimlinger scored at the 2:57 mark and Shaw tied the game with less than a minute to play in regulation.

LMU scored first in overtime, but Air Force tied it back up. Mina and Rimlinger scored in the second extra period and even with Air Force’s goal with nine seconds remaining, the Lions were able to earn the 18-17 win.