After Illness and a Missed Race, Princeton’s 2015 NCAA Championship Meet is Over 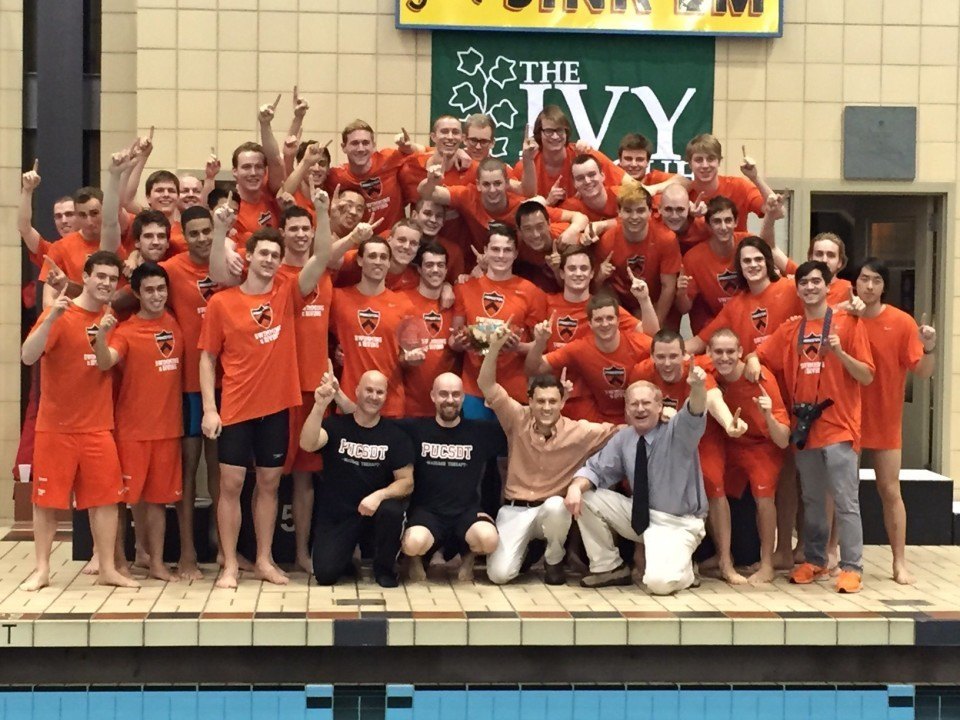 After a magical Ivy League Championship winning season, the Princeton Tigers took an unexpectedly-early exit from the NCAA Championships without any completed swims. Current photo via Brian McDonald

Princeton had to default its two individual qualifiers at the NCAA Championships, including senior Harrison Wagner, a two-time individual Ivy League champion. The 2015 Ivy champion in the 50 free, Wagner spent time in the hospital Wednesday night due to illness and simply wasn’t able to compete in Iowa City.

“Harrison came down with a fever and was fighting an illness for the better part of the week,” assistant coach Mitch Dalton said. “We were staying optimistic his health would pick up; however, after a trip to the hospital last night, it became clear that was not likely.”

Freshman Corey Okubo also qualified for the meet after breaking the Ivy League record in the 400 IM, but he was forced to default due to a miscommunication about the start time for his 200 IM preliminary Thursday morning. Without any individual qualifiers remaining in the competition, Princeton will be unable to compete in any relays for the remainder of the weekend.

“We have a saying on our team that organization is the key to success,” Dalton said. “With that being said, as a coach I take responsibility for this miscommunication. While the past 48 hours have been extremely tough for our team, I am blown away by their maturity, positivity and camaraderie they have displayed in such difficult moments. We win as a team, we struggle as a team and we will get through this as a team.

“While there is no doubt this is a disappointing set of events, I am proud of our men for the way in which they have handled this. I know they will be eager to get back in the water and channel this toward some good spring training and summer long course season.”

Yeah, tough way to go out. One of our writers at the meet (Tony Carroll) watched it happen, said that Corey looked devastated. We didn’t make the connection at the time that this was their only individual swimmer left, and that they now couldn’t swim their relays.

Why can’t he swim the 400 IM? According to USA championship rules failure to show up for prelims the penalty is no swim for events that day. What about tomorrow

Yes, I don’t understand why he can’t swim the 400 IM either. How disappointing for Princeton.

Ada – NCAA rules disqualify an athlete from a championship meet if they miss their race without declaring a false start.

NCAA Rule Book, RULE 3, ARTICLE 4. a. A competitor, once officially entered in an event in any championships meet, must complete that event….Failure to compete for any reason other than medical cause, disqualification under the false-start rule, declared false start, or disqualification under Rule 6-3-2-c shall disqualify the competitor(s) from that event and shall prohibit further competition in the meet.

USA Swimming Rules may allow his continued participation; however, NCAA rules do not.

newswim – because this is an NCAA Championship meet, which has different rules.

Simply put, this is not a USA Swimming Championship. NCAA rules stipulate that a missed swim (“no show”) results in disqualification from further competition in the meet. If the coach had declared a false start (DFS) before the whistle, Okubo would have still been eligible to swim the 400 IM tomorrow which was his invited event and the relays would have still been in play.

Weird rule………You would think that the Princeton coaching staff would have had this under control. I mean it’s Princeton and are not they smarter than the rest of us “normal” folks……

Anyone know who the meet announcer is?

Yes that’s correct, Princeton is continually ranked the #1 university in the nation because a bunch of dummies go there.

First and foremost, even the anti-Princeton contingent in the larger swimming world has to feel somewhat badly for Corey and his teammates. Try to set jealousy aside and realize that these young men worked very hard to get to NCAA’s (and did so immersed in one of the most difficult academic institutions in the world) and had to deal with having this experience taken away from them (or slip away for whatever reason).

Clearly you’re not as smart as you can’t even form a complete sentence. Why don’t you go somewhere else and stop trying to make your life worth something by putting down a person that made 1 mistake. #growup

hmm… “normal” folk? Really?! Look, they made a mistake because they’re human. Maybe you should just enjoy the rest of the meet, stop criticizing other people’s mistakes, and ask yourself why you have such unresolved self esteem issues.

What does “miscommunication” mean? There must be something more to it than the swimmer wasn’t able to read the heat sheet correctly. Swimmers miss races at all ages at all levels. It sucks that this is the rule, but it’s the rule.

Does anyone know why this rule is a rule? People scratch all the time, and it’s obviously nice for the meet officials/workers to know that a swimmer won’t be swimming, but I don’t think it gives a swimmer an advantage.

I’m guessing it’s in part because if they allowed it then others would take advantage of it for various reasons and you’d end up with empty lanes and a slower meet. Probably less likely but a sneaky coach could pretend to enter a swimmer to try influence other coach’s decisions about relays, etc., and then have the swimmer just not show up. Seems like it would be really messy all around.