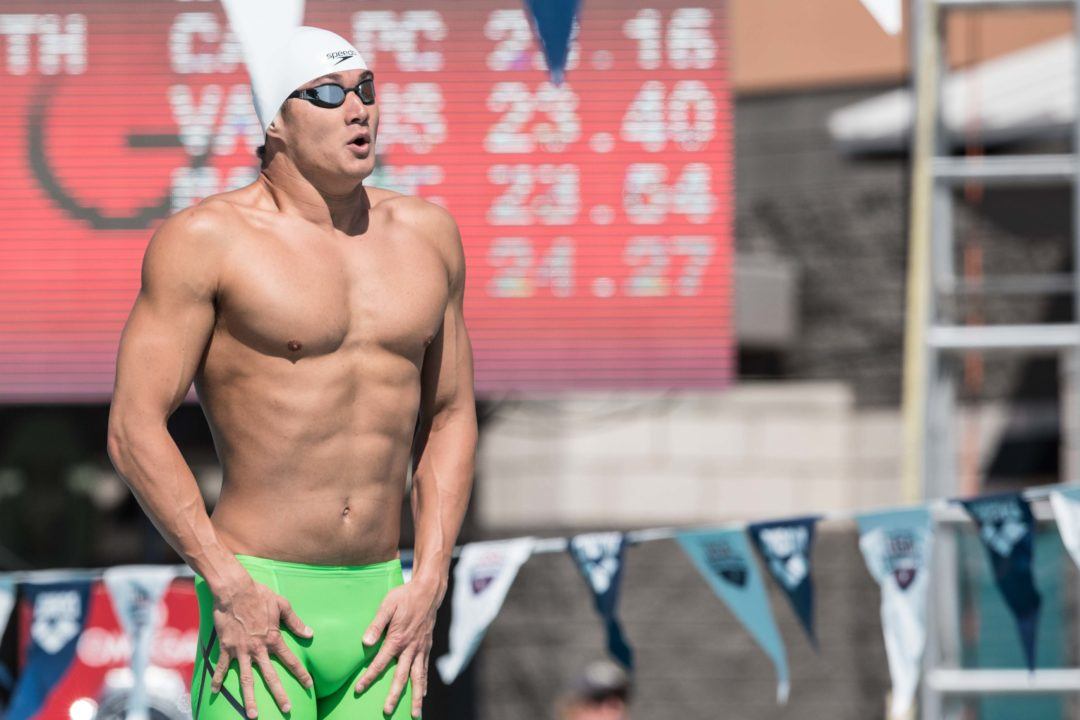 Nathan Adrian posted a time of 48.74 to win the 100 free at the 2017 Fran Crippen Memorial Swim Meet of Champions in Irvine, CA. Archive photo via Mike Lewis/Ola Vista Photography

A few big names came to play on the first full day of the Fran Crippen Memorial Meet of Champions held in Irvine, including a pair of Olympic gold medalists and Cal Bear alumni in Nathan Adrian and Tom Shields.

Adrian produced the most impressive swim of the night, clocking 48.74 to win the men’s 100 free handily by over two seconds. Adrian continued his recent trend of coming home strong in this race, splitting 23.53/25.21. New Zealand’s Daniel Hunter (50.78) and Matt Stanley (50.89) rounded out the top three, and Stanford distance ace Liam Egan was 4th in 52.29.

Notably, 18-year-old Nate Biondi, son of eight-time Olympic gold medalist Matt Biondi, placed 5th in a time of 52.95. Biondi has committed to swim for the Cal Bears beginning next year.

A third Olympic gold medalist from Cal was in action, as Abbey Weitzeil competed in the women’s 100 freestyle. Weitzeil took 2nd in the event in a time of 55.88, losing out to Canyon Aquatics’ Amanda Kendall who touched in 55.34 for the victory.

Other winners on night 2:

Actually Abbey Weitzeil was faster in prelim race 55.69, But still not even close to times showed a year ago. I hope that she is focusing on particular aspects of the race and doesn’t care much about final time. Otherwise her 29.15 for the second half after pretty average start looks very troubling especially remembering what happened to her at Pac-12 after 200 race.

Overtrained. She’s fast-twitch only (like Ervin), and having her do the 200 free in college is just criminal.

It looks like that. I hope the damage done isn’t permanent.

Nothing reassuring about Abbey Weitzeil. Last year she was consistent at her in-season meets around 53 high/54 low.
Hopefully she’s just at a very different point in her training compared to last year’s same period (she didn’t swim in college) but I doubt that’s the only reason. Right now and after a very average SCY season it’s tough to imagine her make the US relay team for Budapest. Hopefully I’m totally wrong.

Amanda Kendall swimming well and is with Abbey’s former team Canyons. With a good taper, Kendall has a shot at world team in multiple events.

She’s just adjusting to a new coach and new college environment. Another year and if she’s still underperforming she should look to go somewhere else (if swimming is a priority)