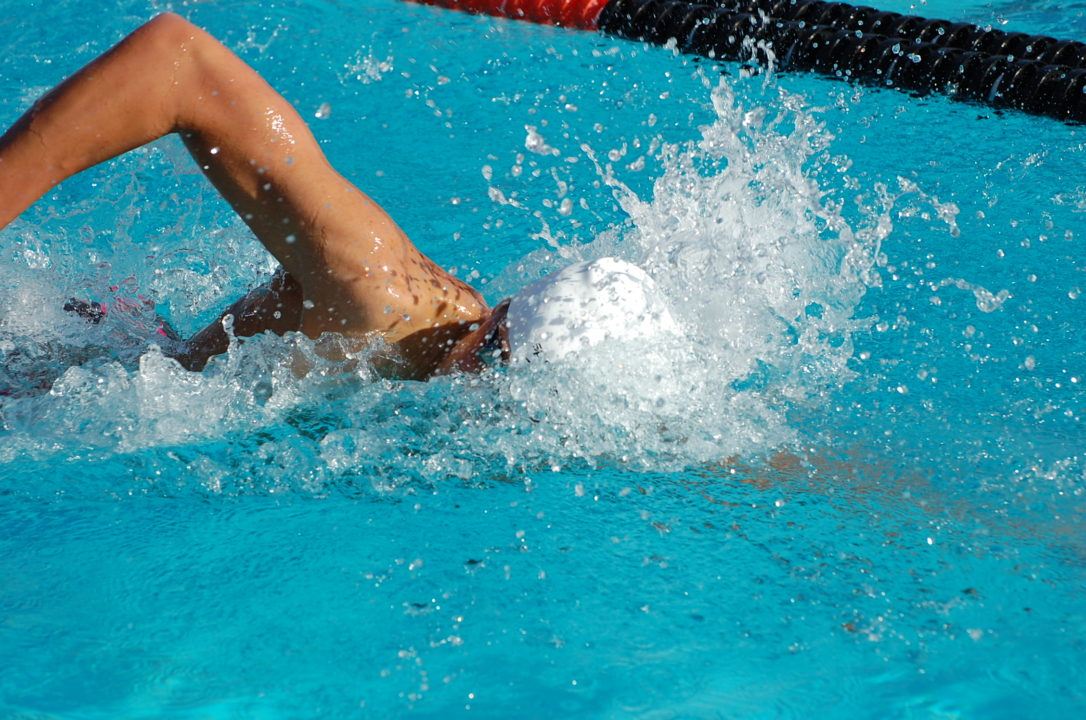 Nate Biondi, a senior at Sierra Canyon High School in Chatsworth, California, has verbally committed to swim for the University of California, Berkeley next season. Archive photo via Anne Lepesant

Nate Biondi, a senior at Sierra Canyon High School in Chatsworth, California, has verbally committed to swim for the University of California, Berkeley next season. As such, Biondi follows in the footsteps of his father, three-time Olympian Matt Biondi, who graduated from Cal in 1988.

Biondi crashed onto the local scene in Southern California at CIF-Southern Section Division III Championships last May, when he won the 100/200 free double seemingly out of nowhere. His family had moved to California from Hawaii when he began high school. Until then, Biondi had favored basketball, but upon arriving to the mainland, he found he wasn’t quite strong enough in that sport to be a starter on his high school’s team, so he turned to swimming with a vengeance. He didn’t swim at CIF as a freshman, but made the A finals of the 200 free (9th with 1:48.34) and 100 free (4th with 48.18). To be fair, he’d been faster in prelims (1:46.58 and 48.01), but still, it was a totally different Nate Biondi who showed up at 2016 CIF. This time he had solid swims in prelims, then monstrous drops in finals: 1:45.66p/1:43.07f in the 200 and 46.99p/46.57f; he also went 21.81 leading off the Sierra Canyon 200 free relay. All of which combined to elevate Sierra Canyon boys’ team to 8th in the final standings.

You can see our interview with him below.

Biondi continues to progress. He earned his first Winter Juniors cut earlier this month, with a 45.65 in the 100y free. His best SCY times are:

So excited to announce my verbal commitment to swim for the University of California Berkeley next year! Go Bears!???? pic.twitter.com/UdGzP5pYKQ

Love it. ‘My dad has been coaching me, working on my front half speed, a gold medalist, and I don’t really remember the rest’.

Kinda ridiculous how far a certain last name can get you these days. This kid is a scrub, if he was anyone else’s kid Cal would have laughed in his face…

I find your comments disgustingly insensitive and ignorantly perpetuating the “political correctness” that our newly elected (by less than majority) leader has deemed acceptable. Why is it necessary to denigrate another person or institution that has their own free will to choose one over another. You only have to look at the new first family to see that nepotism reigns in opportunities. So what?

Newly elected, not only by less than 50% of the voters (I add that more than 100 million people didn’t vote, shame on you) but far worse, elected with less votes than her opponent. What a democracy! That clown racist, homophobe, sexist, and liar with the nuclear weapon in hands (scary) is absolutely illegitimate. Goodness, I haven’t still digested the result almost one week after! 😆 But on the other hand I was not so surprised considering the level of education of a certain part of people. And then you wonder why the R guys love to destroy public education. Add a R Congress to implement their crazy economic and anti-social programme and it’s the icing on the cake! Hillary… Read more »

we prefer not to suck (like maybe lets say….FRANCE).

No reason to bring politics to swim swam.

Preserve your energy to stop Marie. As for Durden’s team, it is the best example of Darwinism. The best prospect may fail and busts may shine.

How did a debate about Biondi’s son getting into Cal on name recognition erupt into BOBO voicing his disdain for TRUMP? BTW we don’t know for certain who won the popular votes. There are still a lot of votes yet to be counted and regardless the electoral college had a clear winner. You know the system that’s been around in some form since the late 1700’s and if it was bias there’s been plenty of time to do something about it. Can’t cry about it when your horse loses, but nobody seemed to care the last two elections.

Vote Up6-1Vote Down Reply
YOU ALL SUCK

Regardless of his name, a walk-on with a minimum of serious time in the sport who is capable of 45 mid 100 free is worth come tentative interest from any coach. I doubt he shines in the way his father did, but I’m sure he has the athleticism, stature, and genetics to improve rapidly to point of being in the conversation for relays if he can handle the transition and puts in the work.

We get it, you are the new swimswam troll.

I guess to give your comment a serious answer, schools take chances on certain kids that show upside. This kid has improved dramatically in a couple years and is probably still improving. I’m sure being a Biondi helps, but I think a lot of big schools would take a chance on a kid like this with the Biondi name or not.

1) He won’t be the slowest incoming freshman for Cal, and he wouldn’t be at any top tier school.

2) If you read the article, it outlines his rapid improvement. He didn’t qualify for CIF as a freshman, went 48 in the 100 free as a sophomore, and is now a 45 second 100 freestyler. I would take my chances on someone still improving at that rate.

Vote Up21-1Vote Down Reply
He Gets It Done Again

Everybody knows he’s not a top recruit and will have to drop significant time in order to ever make it to NCAA’s… but why not take a chance? I doubt Nate will end up being as successful as his dad, but it’s not the craziest thing in the world to predict the son of a former WR holder and Olympic champion might develop into an asset at the NCAA level. You also have to take into account he hasn’t been swimming that long. Matt Biondi’s best times in high school were 20.40 and 45.04. Nate could come close to that by the time his senior year is over.

Let’s consider Dr. Gary Hall & his famous son, yes? Championships & WR’s in that lineage, so certainly not out of the question for the Biondis either, eh?

I saw this young man swim a couple of weeks ago at a senior invite – what a raw talent !! From what I understand he has only benn swimming year round for less than a year. Durdan is a very good judge if talent and I am sure he has seen him swim in person. Way too much upside with this young man. It’s going to be fun to watch his improvements over the next few years!!

And, now just a few short months have passed, his 50 is already down to a 20.44, his 100 a 44.93. Not bad improvement curve, many would say. Seems like there’s lots of potential here! Good for Nate, good for Durden, good for the Cal Men’s team to have this guy on their squad. Things look rather rosy for Nate et al. Will be interesting to see how he does the rest of his H.S. Senior year, and then 4 years at Cal.

The real story here is not just the name but Nate’s rate of improvement especially coming over from basketball to high school swimming. That’s what Cal is banking on as well as the pedigree. He may not score points at NCAAs as a freshmen but by his sophomore or junior year I would be surprised if he doesn’t.