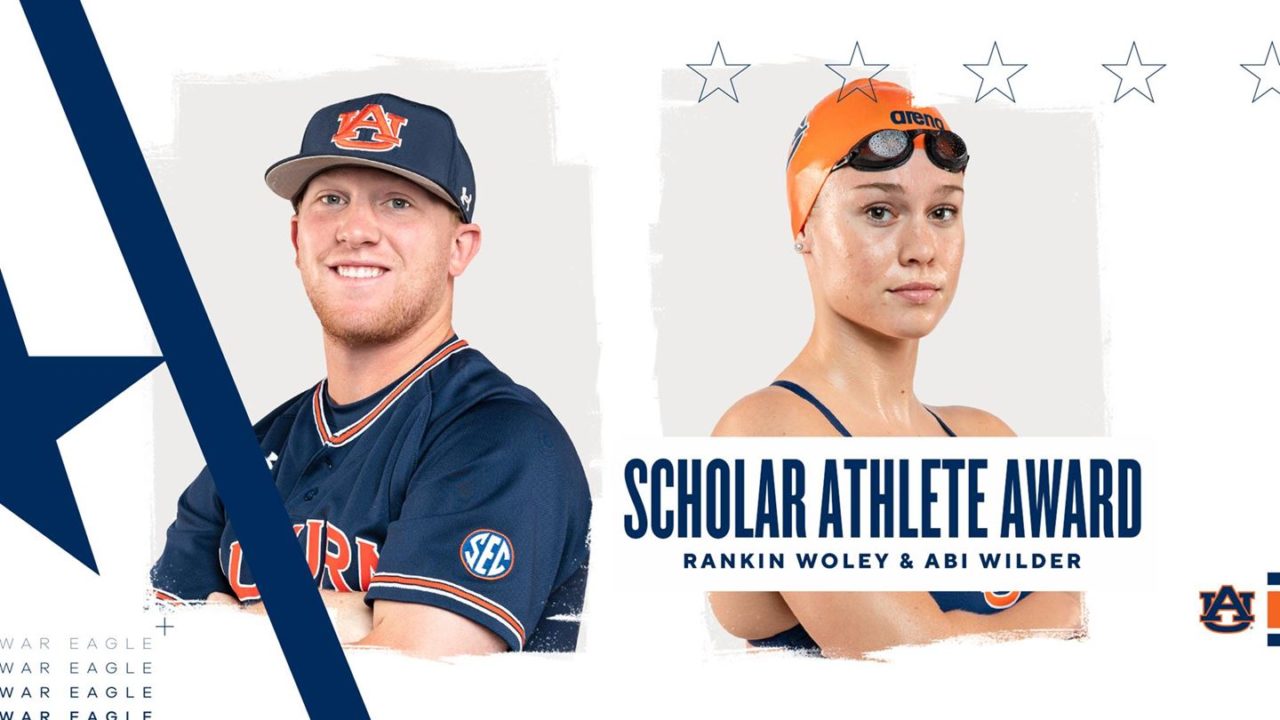 To acknowledge those at Auburn who have excelled in the classroom this past year, the 2020 AUSPY Awards is recognizing two Scholar Athlete Award winners. The female winner is swimming’s Abi Wilder, and Rankin Woley from baseball has been chosen as the male winner.

Wilder is a senior at Auburn who is on track to graduate in August with a degree in exercise science. She plans to take a gap year working in her field while she applies to Physician Assistant (PA) schools.

The Florida native still remembers coming on her recruiting trip to Auburn and just being overwhelmed with emotions when she stepped foot on campus for the first time.

“To be a student-athlete at Auburn was something that was so special and wrapped up in so many traditions and something that I really enjoyed being a part of,” Wilder said. “It meant everything to me.”

Woley, the male winner, is also on track to graduate in August with a degree in business administration from Auburn’s Harbert College of Business. Academics has always played a pivotal role in his life, and the Scholar Athlete Award is a nod to his hard work.

“It’s really an honor,” Woley said. “A lot of that work goes unseen. Not many, especially our fans and even the guys on the team, really get to see that work that’s put in off the field. Maybe my roommates get to see it, but other than that, a lot of people don’t really know. A lot of people think that you’re just an athlete on a scholarship.

“That’s not the way I was raised. That’s not the way my mom would let me be. I’ve always been extremely dedicated to education. Having people recognize the hard work I’ve put in over the last four years, it’s nice. I’m really grateful for it.”

Woley credits his mom, who graduated from Vanderbilt University and became a nurse, as well as his grandfather, who attended Princeton University, for his academic prowess.

However, his success is also a byproduct self-drive and an internal need to achieve.

“I don’t like to lose,” Woley said. “I think it’s the competition side coming out. I really don’t like to lose at anything, whether it’s a whiffle ball game in the backyard, a baseball game, competing in the World Series, or in the classroom, I don’t like to lose at really anything. I take (academics) with the same attitude and mindset, and I dedicate myself. I put in effort and the work and hope that it pays off.”

In addition to Wilder and Woley, football’s Brodarious Hamm was also recognized for his work in the classroom as this year’s winner of the SASS Academic Achievement Award.

Rankin Woley! A FINE Georgia boy! Congratulations to these two excellent student-athletes! And way to represent your home state, Woley!