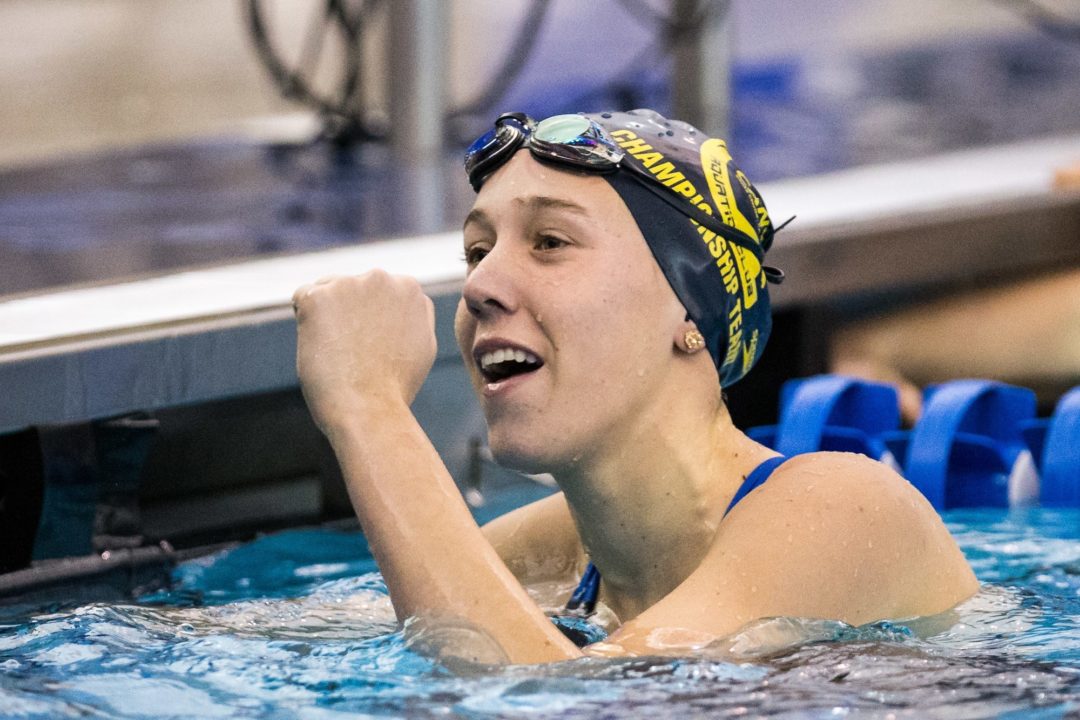 She's been a relay hero all weekend, but Abbey Weitzeil saved her best swim for last at the 2014 Winter Junior Nationals. Archive photo via Tim Binning/TheSwimPictures.com

She’s been a relay hero all weekend, but Abbey Weitzeil saved her best swim for last at the 2014 Winter Junior Nationals.

The Canyons Aquatic Club senior smashed her way through the leadoff leg of the 400 free relay to smash the 17-18 NAG record, the American record and the U.S. Open record in the 100 free.

Weitzeil was a blistering 46.29 leading off that relay, her straight-arm stroke screaming along on top of the water faster than any swimmer in history.

She takes down the previous American record set by Simone Manuel just last month at 46.62, not just sneaking under the mark but absolutely crushing it.

Weitzeil also shatters the U.S. Open record, which tracks the fastest swim ever done on U.S. soil. That one was held by Bahamian Olympian Arianna Vanderpool-Wallace at 46.61. Weitzeil now unifies both records at 46.29.

The future Cal Golden Bear was untouchable in the back half of her race, nearly closing in a 23-second split. Her full splits, along with Manuel’s splits from her most recent record, are below:

As always, we have to note Weitzeil’s successes this meet have come in spite of an intercontinental flight she took from Doha, Qatar earlier this week. She scratched all of her individual races here, instead swimming just one relay a night, and that has seemed to be the magic formula, as she’s been nothing short of brilliant everytime she’s hit the water in Federal Way.

Abby was 51 at SC Worlds. The weekend was all smiles and I’m surprised she wasn’t sleeping through the whole meet coming off the plane flight. Swimming quick! She would have helped most of the MENS relays at Juniors.

Beast! She did it between the flags as well, not with huge walls. This augers well for her LCM future.

Phenomenal. Based on her interviews she seems very grounded and humble too. Can’t wait to see how Ms.Weitzeil progresses in the years to come.

Useless conversion.That time is probably something like 53 high at LCM.Abbey has great walls, and that a conversion tool can not catch.

Very cool what happened this week.
It will motivate Simone Manuel to train still harder to retain her American record next March.
I know the 100 free is on day 3 of NCAAs at the end of a long and stressful meet so it’s hard to think she will be enough fresh to do it but with such a talent we never know.
Both girls will push each other in the next years to reach levels US women’s sprint has never known.
US men’s sprint must be jealous. 🙂

Let’s still hope the Hoffer’s , Dressel’s and a few others take the step up and shine too .

“Both girls will push each other in the next years to reach levels US women’s sprint has never known.”

Unless BOTH Manuel and Weitzel break 100 free WR and win double Worlds and double Olympics, they will not “reach levels US women’s sprint has never known”.

Too much pressure u put here ! not relevant – unless , unless , with unless u can change the world as it is . They will do great and that’s staying positive with reality . Period

I did not put pressure on them. Bobo did.

Logical, Weitzeil didn’t swim in individual all week. She wasn’t tired. Not normal they accept that record. It’s totally unfair.
Then Weitzeil is only a short course swimmer with no future in the big pool where only Stanford swimmers can shine.
And finally she commited to . . . Cal!

Not only is he an internationally-renowned poolside prognosticator, but he’s also a snarky comedian.