Abbey Weitzeil blows away Simone Manuel NAG with 21.49 in the 50 free 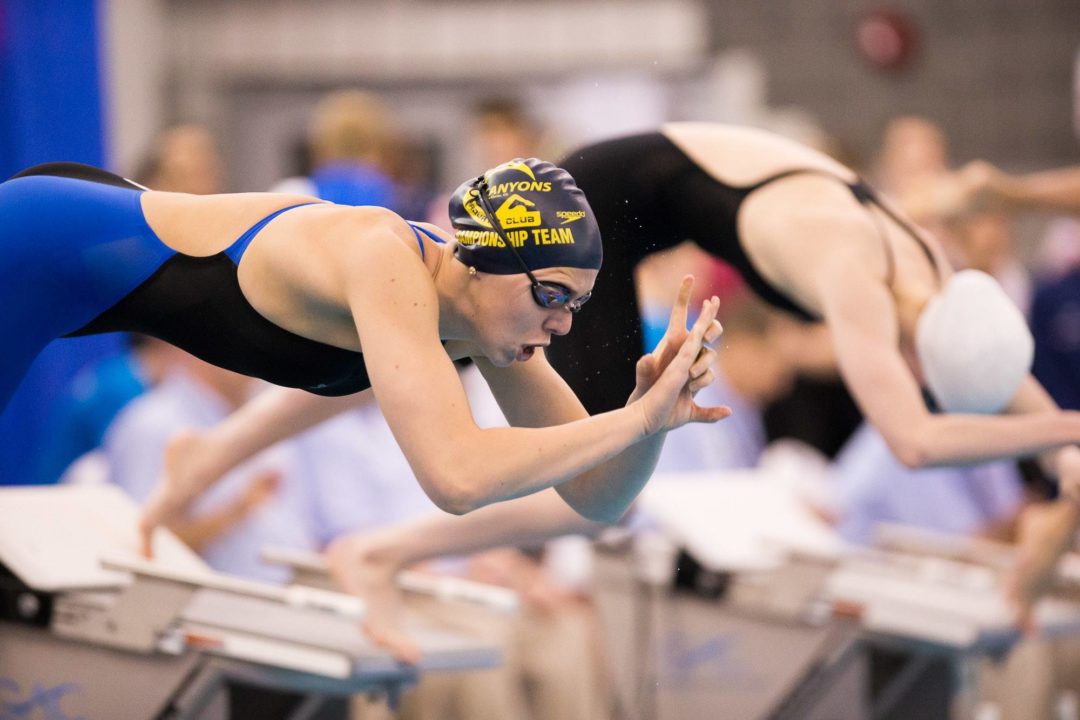 Leading off the 200 free relay for the Canyons Aquatic Club, high school senior Abbey Weitzeil broke the 17-18 National Age Group record in the 50 free with a blazing 21.49. Archive photo via Tim Binning/TheSwimPictures.com

Leading off the 200 free relay for the Canyons Aquatic Club, high school senior Abbey Weitzeil broke the 17-18 National Age Group record in the 50 free with a blazing 21.49.

That makes her the fastest junior (under-18) performer in history in the event, bettering the 21.59 put up by Simone Manuel just a few weeks ago.

Manuel, a freshman at Stanford, and likely the best sprinter in the NCAA, officially holds the 17-18 NAG record at 21.70, though her 21.59 from the Art Adamson Invite in November would have supplanted that record, barring any complications.

Now, though, Weitzeil’s time will better both of those swims.

The list of accolades to go with Weitzeil’s swim are long, and behind all of it is the backdrop of Weitzeil’s crazy December so far. The 18-year-old flew to Doha, Qatar at the beginning of the month to compete at the Short Course World Championships for Team USA. She wrapped up that meet by taking the Mixed 4×50 medley relay from 3rd to 1st, winning World Championship gold and breaking a world record in the process.

She then flew back the United States, and is almost certainly still dealing with some level of jet-lag, having not been back in the States for even a full week yet. But Weitzeil has been red-hot this week, turning heads with a 45.8 split on the Canyons 400 medley relay and now blowing up the NAG record books with this leadoff leg.

Weitzeil’s swim check in just outside the top 10 performances of all-time, for any age, and she becomes the 5th-fastest performer in history:

Just as exciting is the fact that Weitzeil will tangle with Manuel multiple times in college, as both will swim in the Pac-12 with Cal and Stanford, respectively, perhaps the two favorites for the next several NCAA titles. Pac-12 swim fans can look forward to watching multiple conference- and national-level battles between perhaps the two best young sprinting talents in American history.

Hate to burst a few bubbles but Weitzeil’s times at Jrs don’t mean a whole lot.

Full blown taper thanks to Qatar.
No morning effort required to qualify.
A solitary short sprint in the eve.
Well anyone can go faster with all these special benefits!

otoh Simone Manuel had just 2-3 days of rest at Art Adamson.
She had to deal with morning prelims.
Raced multiple & longer events in finals.
Still broke records left and right!

Keep in mind Weitzeil is a relay swimmer like Romano.
She can’t seem to reproduce those kind of times outside of relays.
Good in yards but not a factor in the Olympics pool.
Didn’t… Read more »

She’ll probably never have a full blown taper for a meet ever again.

And those 50s in the prelims really kill you for finals, don’t know how she’ll ever figure out how to recover from that.

And the benefit from knowing she has 3 other girls swimming after her even though she’s doing the same flat start that she’d be doing if it was an individual race at a meet that probably doesn’t mean much to her must make her race AT LEAST a full second faster/ 50.

Not to mention the fact that shes basically a full out underwater/ turn swimmer, and that her over the water swimming is total crap. I don’t… Read more »

By the way people, and I know a lot of you guys are really bad at this thing: THAT WAS SARCASM (besides the last line of course).

Simone Manuel is the best American sprinter right now. No doubt. And she will be perhaps the best world sprinter in the next few years. Probably. Will break all American and NCAA sprint records in LCM, SCM and SCY in the future.
But why criticize Abbey Weitzeil and belittle her performances?
Only because she will swim for Cal in college? 😆

When u watch back the race in Doha ( 4 by 50 free medley ) – She just flies , after the break out – Nobody could catch her . A pure lightening bolt with her straight arm ! very impressive girl . Here , same again . Wonderful

When u get a close look here , Weitzeil catches up 2 body lenghts definit over the first 50 yards ,than pulls out one body lenght advantage at the finish !!! Just on one 100 yards !!! Very impressive . She must be one of the few young girls out there to swim straight arms with such success so far .

Her relay performances with Canyons Aquatic Club in video.

She goes so fast in the water and emits such a strong magnetic field that she caused a big power failure in the pool on Thursday and a live stream crash on the USA swimming website yesterday. 🙂
Be prepared for any eventuality tonight!

WOW! 21.49! 😯
Abbey has such power with her straight-arm technique.
The 50 free is her best event right now but I can’t wait to see her 100 free lead-off leg tonight in the 4X100 free relay. Something very special isn’t out of reach. 46.50?
She swims only the relays this week so she’s fresh to perform. And on sprint, the fresher you are, the faster you go.
With Simone Manuel and Abbey Weitzeil USA has 2 top world-class sprinters for the next 10 years.