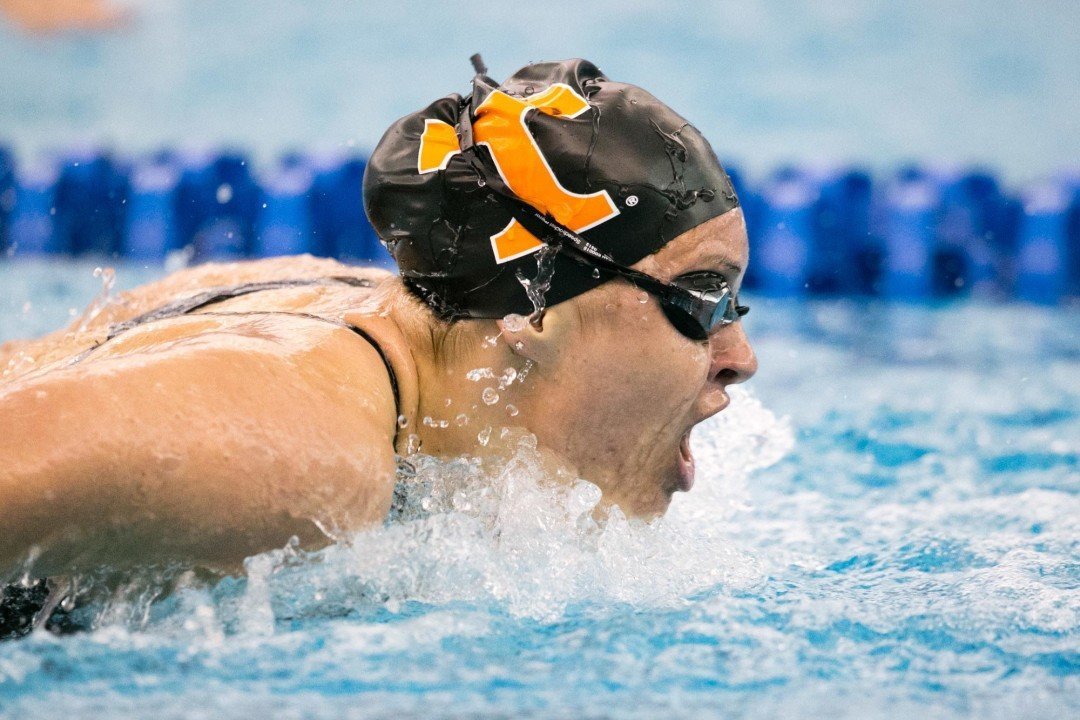 The Arkansas Razorbacks pulled a big road upset against Tennessee, winning by 10 points, 146.5-136.5. (Updated after Arkansas was declared the winners on Tuesday). Archive photo via Tim Binning/TheSwimPictures.com

UPDATE: According to Arkansas, the results were under review over the weekend, and the Razorbacks were informed that they won the meet despite original reports that Tennessee had won. This story has been updated accordingly.

The issue appears to be a miscommunication on the meet format. Tennessee believed the meet was in the traditional 16-event format with athletes allowed 4 entries. Arkansas, though, ultimately selected a 15-event order with 3 entries per swimmer. It would appear that any event that was a fourth entry for a Tennessee swimmer was wiped off the books, as athletes only got three races. That would nullify Tennessee’s 400 free relay, among other races, which originally won before the event was rescored in Arkansas’ favor.

The Arkansas Razorbacks pulled a big road upset against Tennessee, winning by 10 points, 146.5-136.5.

As part of the effort, Arkansas won 9 out of 15 events, overwhelming the Volunteer depth to earn the SEC win.

The Razorbacks leaned heavily upon senior Anna Mayfield at the meet, who won a trio of events. The meet didn’t start with a traditional medley relay, and instead the teams launched right into individual racing and Mayfield clawed out a big win in the 100 backstroke in 54.51.

While she was two seconds better than Tennessee’s top finisher (Christina Paspalas – 56.56), the Volunteers had the 2nd-through-7th-place finishers in the race.

In Mayfield’s second event win on the day, the 500 free, she swam a 4:50.67 for victory. This time the Razorbacks held serve a little – going 1-3-4 overall – to defend their turf in the distance freestyles that have historically been the program’s biggest strength.

The Tennessee Volunteers, while they didn’t totally punt on primaries, did put most of their swimmers in at least some secondary events. All-American Faith Johnson won the 100 free in 50.25, which is in her wheelhouse; but didn’t fare as well in the 100 back or 200 free – secondary events for her.

That’s how the Volunteers’ day went. They got big wins where they had swimmers in primary events, and elsewhere they showed resolve to fight for minor placings and to not let the Razorbacks capitalize too much on their victories, keeping the meet close.

Maddy Tegner also got a win, cruising to a 9:45.93 in the 1000 free that ranks her 9th in the country this season, though she lost the best strength-on-strength matchup of the day to Mayfield in the 500 free.

The meet headed into the 400 free relay with Arkansas holding a 3 point lead. That essentially gave the meet to whichever team won the event.

Further heightening the tension is that both teams sent 400 free relays to the NCAA Championships last season, meaning both have had success in their sprint groups.

This appears to be where the updated scores came into play. Originally, Tennessee was listed as the winner of the relay and the meet. But Arkansas told SwimSwam on Tuesday that it had recieved confirmation that it won the meet, and listed its team of Maddie Monroe, Natalie Burnett, Nina Drolc and Rachel Stoehr as the winning 400 free relay.