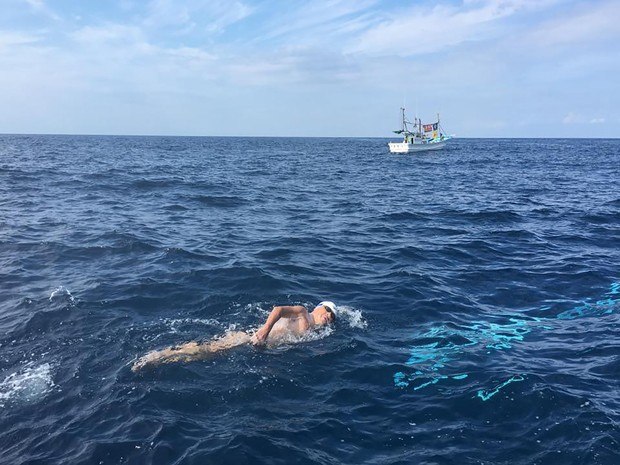 Toshio Tominaga of Japan has become the oldest person to ever swim across the Tsugaru Strait. The Tsugaru Strait is between... Archive photo via http://s2.glbimg.com/BSDbdsaBM21tDGEnhRusbL-jUA0=/s.glbimg.com/jo/g1/f/original/2016/09/07/toshio-tominaga.jpg

Toshio Tominaga of Japan has become the oldest person to ever swim across the Tsugaru Strait. The Tsugaru Strait is between Honshu and Hokkaido in Northern Japan and connects the Sea of Japan with the Pacific Ocean. It is known to be one of the most difficult long distance open water swims due to its unpredictable currents. David Yudovin became the first person to swim across the channel in 1990.

The Tsugaru Strait is part of the “Ocean’s Seven”, a prestigious circuit of the most famous open water swims worldwide. In addition to Tsugaru, the Ocean’s Seven includes the English Channel, the North Channel, the Cook Strait, the Molokai Channel, The Catalina Channel, and the Strait of Gibraltar.

The Tsugaru Strait is about 19.5 kilometers (about 12 mi) at its narrowest part, however the swim cannot be completed at this part because of the strong currents. Instead, Tominaga swam a total of 38 kilometers (about 23 mi). He began at 5:30 am on September 7th and 9 hours and 58 minutes later completed the crossing. It was originally estimated that he would swim 45 kilometers; a distance that would take him around 12 hours to complete. His actual finishing time was the seventh fastest in history according to the Tsugaru Channel Swimming Association (TCSA).

Prior swimming the Tsugaru Strait, Tominaga played water polo and swam in school. After retiring from his career, he began focusing more on swimming, particularly open water.

Previously to Tominaga, Pat Gallant-Charette was the oldest person to swim across Tsugaru at the age of 61.

Congrats to Mr. Tominaga on this awesome achievement! Hopefully his accomplishment will encourage others of all ages in their own swims.

Also thanks to the author for the details about the Tsugaru Strait and the swim. I’ve been finding myself frustrated with the lack of relevant details and even basic information in news articles from (non swimming) news outlets lately, so this was a refreshing change that I appreciate.