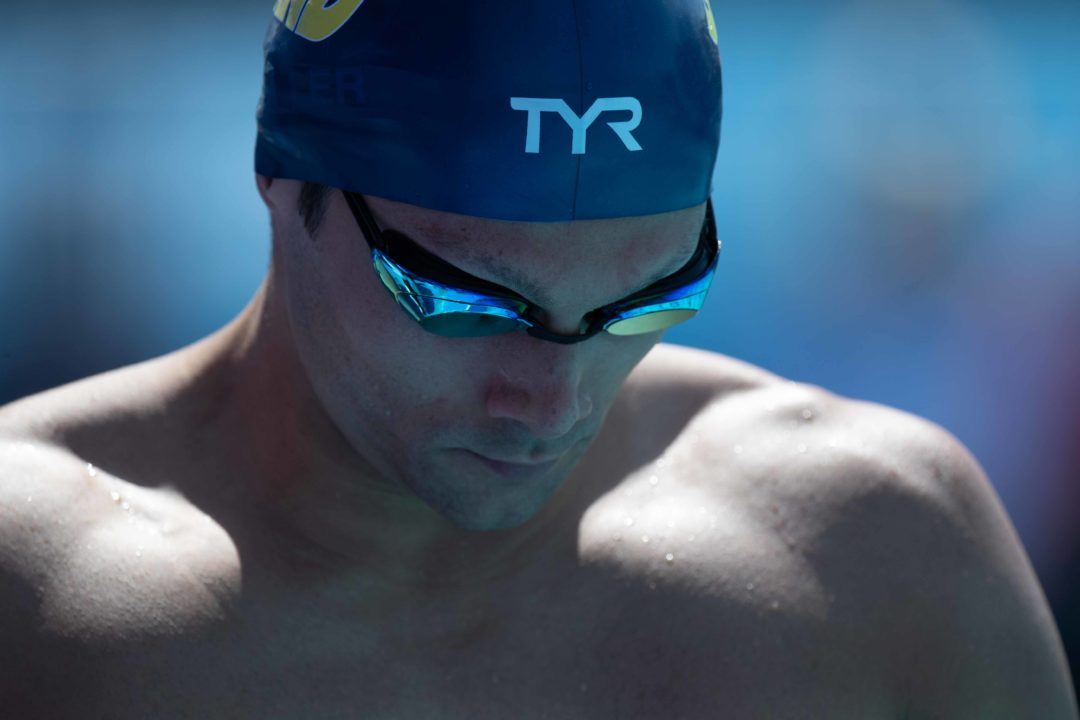 Visualization is a mental training skill that swimmers can use to boost confidence. Here's how some of the top swimmers on the planet use it. Current photo via Mike Lewis/Ola Vista Photography

Visualization, or strategic daydreaming about your swimming, is one of the more popular mental training skills available to the ambitious swimmer.

The skill is simple in theory: You find yourself a quiet spot, close your eyes, and roll the scene of your ideal performance, or yourself overcoming adversity, or the pool where you are going to compete.

Here’s how some of the fastest swimmers on the planet use visualization to help them perform their best.

The United States Olympic Trials meet is one of the most high-pressure competitions on the planet. With thousands in attendance, the pressure-cooker at Trials is no joke.

Cody Miller, who most swimmers now recognize from his popular YouTube channel, used visualization nightly during his preparation for the 2016 Trials. He used his imagery to set the table for how he was going to react and perform under the lights in Omaha.

“For months, before I qualified for the [Olympic] team, every night before I fell asleep, I would spend 5 or 10 minutes just kinda visualizing what the atmosphere at Olympic trials in Omaha was going to be like,” says Miller. “What the pool was going to look like, how it was going to look when I was standing behind my lane. So all of those things were already determined in my head and how I was going to act when that time finally came.”

Visualizing helps to reduce overthinking, something that a lot of swimmers struggle with and that can cause performance to crumble in those precious moments behind the block.

Overthinking means you are thinking about what others are thinking about, worrying about disappointing your parents, obsessing over what the competition is doing, or over-analysing every little thing you are doing. Visualization helps keep you focused on the things that promote peak performance under pressure.

“When I get there, I’ve already pictured what’s going to happen a million times, so I don’t actually have to think about it,” said Franklin, a four time Olympic gold medalist.

Like any other skill, visualization is something that you need to hit with a ton of repetitions to get the more from it. Using mental imagery as a last minute addition to your training can be effective in limited ways, but getting the max amount of self-confidence and automaticity comes from putting in the reps.

Bob Bowman, Michael Phelps’ longtime coach, had him doing relaxation and visualization work from a young age to help calm Phelps. Each night Phelps would go home after practice, and before bed, watch his goal races in his mind, using different perspectives and putting in the reps.

“It has to be rehearsed many, many times,” Bowman notes. “By the time Michael gets up on the blocks to swim in the World Championships or Olympics, he’s swum that race hundreds of times in his mind before he gets up there.”

Visualization and imagery help prepare you mentally for your race by giving you countless rehearsals, so that when the real thing happens, it will feel like just another race. Swimmers who use this tool successfully do more than just see themselves perform at a high level, they anticipate what they will feel like in the water.

Whenever Katie Ledecky hits the water, she does so with the knowledge that she has trained her butt off and is ready mentally for each part of her event.

“I have my goals and I visualize things to help me achieve those goals,” says Ledecky. “I know what my stroke should feel like at different parts of the race, and I can just kind of picture that in my mind.”

Elite swimmers have a certain degree of swagger and self-confidence. And there are fewer swimmers who displayed the confidence of a champion than Megan Quann (born Jendrick).

As she prepared for the Sydney Olympics in 2000, she would take a stopwatch, close her eyes, and picture herself swimming the 100m breaststroke in world record time.

Adam Peaty’s preparation for the Rio Olympics went beyond what he was doing between the lane ropes. He also spent time “training” what was happening between his ears so that he would show up at the Olympics ready to Hulk smash the competition. This started with using visualization and imagery.

“It’s weird because I didn’t really get that nervous during the Olympics. I’d swam that race a thousand times in my head. I’m a big fan of visualization so I’ll always visualize my race beforehand,” says Peaty.

Peaty enriched his visualization work by incorporating the environment and physical sensations, which helped deepen the imagery.

“If you start feeling your environment and seeing it at the same time — what will the water feel like? Who’s going to be beside me? What’s it going to be like when you touch the wall? —you can prepare yourself for every situation and that’s something that really helps me,” says Peaty.

During the 1990s, Kieren Perkins of Australia repeatedly shattered the world record in the 1500m freestyle. In 1992, he shaved a total of seven seconds off the world record, becoming the first swimmer to go under 14:50 in the mile.

Part of Perkins’ grueling preparation of exceling in the pool’s longest event included mentally rehearsing the race he wanted.

“I start months before the event. I just sit there and visualize the race in my mind,” says Perkins. “I dive into the pool. I’m swimming strongly. I’m out in front. The crowd roaring, I can hear them. No one can catch me. I even see myself…with the gold medal placed around my neck.”

Getting Started with Visualization

Even though visualization and mental imagery looks super simple in theory, it’s not always that easy in practice.

Sometimes our visualizations get away from us, leading our mental movie to negative outcomes, like swimming slow, getting disqualified, or choking under pressure.

Or, swimmers will use it at the eleventh hour to band-aid a lack of preparation.

Visualization works best when you treat it like anything else you do in the pool. Practice, consistency, and progression.

I’ve put together a couple different resources to help swimmers get started with visualization, which you can read below:

Michael Phelps would literally have dreams about best times he would actually go. Really interesting story about his 400 im split is fleshed out more on the Brett Hawke interview

Hawke has really good podcasts out there. It’s a tragedy that swimswam hasn’t taken him in yet.

Didn’t Phelps visualise multiple different situations, good, bad, unexpected and otherwise so that he felt ready/ like he had experience/been through the situation and knew how to deal with it, and keep his head?

Are there any high level swimmers that don’t visualize? I don’t know of any

Everyone uses visualization. Some are aware of that and use it, intentionally, to their benefit.

How can you repeatedly visualize doing multiple dolphin kicks on your pullout and not feel the slightest tinge of guilt?

Manipulate and mold the “The Field” to your vision. Cool, I’m in….