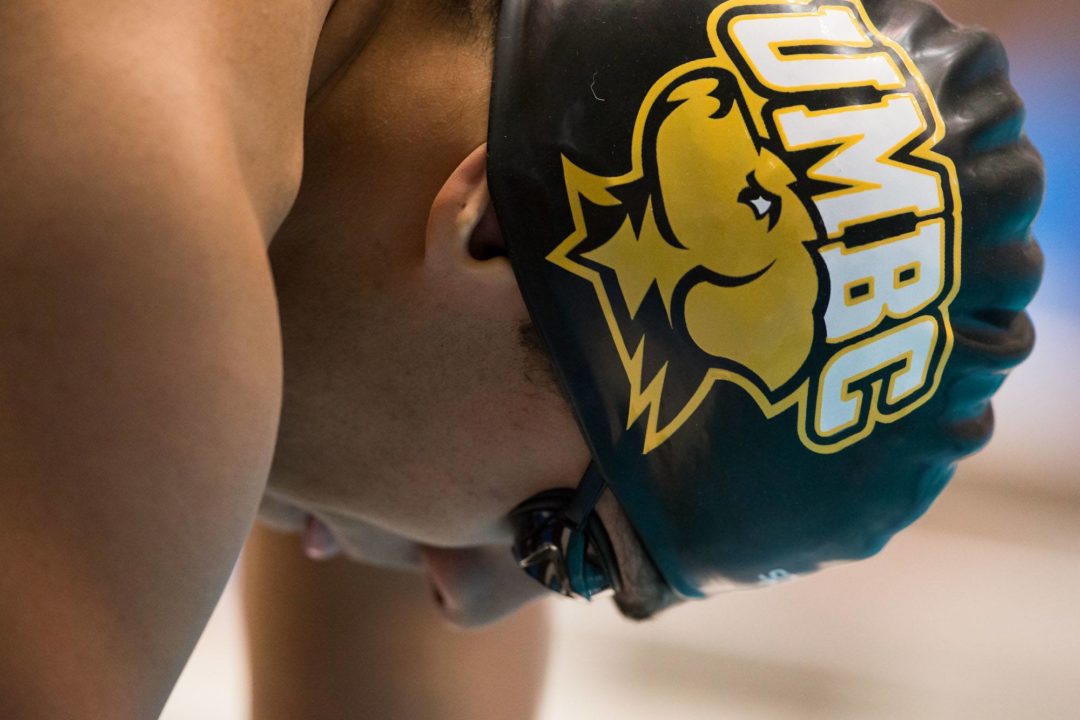 Chad Cradock, head coach of the University of Maryland-Baltimore County (UMBC), is currently in his 14th season at UMBC and just celebrated his 200th dual meet win as a head coach.

Welcome to the first installment of our Coaches’ Confidential series. In this edition, I profiled Coach Chad Cradock, head coach of the Men’s and Women’s Swim Team at University of Maryland-Baltimore County (UMBC). He is currently in his 14th season at UMBC and just celebrated his 200th dual meet win as a head coach! In addition to his dual meet success, Chad has also led the UMBC Retrievers to 15 America East Championship titles, including ten consecutive Men’s titles from 2002-2011.

A native Canadian, Coach Cradock made his way to the states to swim for UMBC; graduating in 1997. After a brief stint as assistant coach for his alma mater, he became the head coach of both the men’s and women’s programs in 2001.

I asked Coach Craddock (who happens to be a former club coach of yours truly) to answer some questions about swimming, academic, and life in general.

Here is what Coach Chad Cradock had to say:

What was the last movie you saw?

The most memorable moment was back in 2011, when UMBC hosted the America East championships at Germantown. Not only did we host a great meet, but our team also performed out of their minds from top to bottom. The spirit was out of this world.

I love a simple set that has all of the swims on the same interval. It challenges the swimmers at the end of each set:

I think I have an embarrassing moment each and every day, so I will take one from this week. I was interviewed by Jeff Commings of Swimming World and I was asked the five questions at the end of the show. One of them was if I could trade places with a non-swimming celebrity for a day, who would it be? I was stuck and could not answer the question for some reason. Then, I answered Nicholas Cage…when I meant to say Kevin Bacon. I have been made fun of all week for this.

I have learned patience and understanding. Take the time to get all the facts before coming to a full conclusion.

Describe your relationship with swimming as a child.

I feel as a young person I was pretty slow. It took some time to compete at a more competitive level. I always remember seeing my name close to the bottom if not at the bottom of the results.

This is a tough one as I never thought I would be a coach. I was working at a swimming camp (Chikopi) up in Canada and helped open up the camp right after I graduated in1997. When I plugged in the phone for the first time it immediately rang. It was my coach (Sid Burkot) on the other line. My heart dropped. I thought I was going to be yelled at. Instead I was asked if I wanted to be his new Assistant coach. It was from that point on I was a coach.

Describe your coaching philosophy in 3 words.

Yes I believe there have been many who have influenced my coaching style. I would start with my parents who gave me the values I have today. Then, it would be the caring nature of my camp (Chikopi) director Bob Duenkel. My wife Christie Cradock who always forces me look at everything from a different prospective.

The president of our university Dr. Freeman Harbowski who told me that you should never be thinking of what you are going to say next, rather you should always listen first before responding (still working on that). Our admistrators like our athletic Director Tim Hall who is always there to listen and give advice. Our entire assistant coaching staff, especially Chris Gibeau. We understand each other and challenge each other to bring out the best in our swimmers.

My own kids: Amanda, Geoffrey and CJ who have taught me the gift of patience. Finally, the athletes that give me the opportunity to work with them. We have an open door policy where they can ask questions and have input and they make all us to be much better people and coaches.

First, I would be living in Canada as I am Canadian. Also, I would most likely be a teacher in the classroom. Probably getting a lot more sleep.

I like to spend my remaining time at home with the family.

I love hockey. Every Canadian parent wants their child to be a hockey player I played for a while but then turned to swimming. I have come to like the NFL over time as well. I guess you have to living in the US.

What has been the hardest you have ever laughed as a coach?

I had to think of this but I am going to go with a recent story. Most know I love people who can joke around but also know when it is time to be serious. This one goes like this: One of our freshman swimmer’s caps broke. She asked if she could have a new one. Our distance coach and I love to staple the caps and give them back to our swimmers. Coach Rob Bellamy took the cap and stapled it back together.

The swimmer looked at the cap and said it was stapled. Coach Rob told her we couldn’t give her a new cap because it was not in the budget and we all walked away. She tried to put the cap on and it broke. She stood there more than likely thinking “what is wrong with us?”

In order to be a successful student athlete you need three things in your life:

The key to success is remembering you can only excel in two of the three things mentioned above.

What are you most excited for in the upcoming season?

I am always excited for our training trip as it is a time for our team to bond and get closer together. I would then have to say championships. I love seeing our team grow over the years.

I get asked the question “is today fun?” all the time and my answer is: “every day is fun”. They always stare at me. I am not sure everyone agrees!

That concludes our inaugural edition of Coaches’ Confidential. I’d like to thank Coach Craddock for taking time out of his busy schedule to answer the questions.

Be sure to check back for future installments as we pick the brains of NCAA coaches from all divisions!

Trevor Ziegler is a writ

er based in San Antonio, Texas. He is a graduate of the University of Massachusetts-Amherst where he also swam for the Minutemen. In addition to being well-immersed in the swimming world, Trevor is also a self-proclaimed pop culture aficionado. He spends most of his time brainstorming he can write about both his favorite bands/tv shows and swimming in one coherent article.

Trevor I echo Matt’s comment. You have come a long way from that “Mighty Mini” I coached.