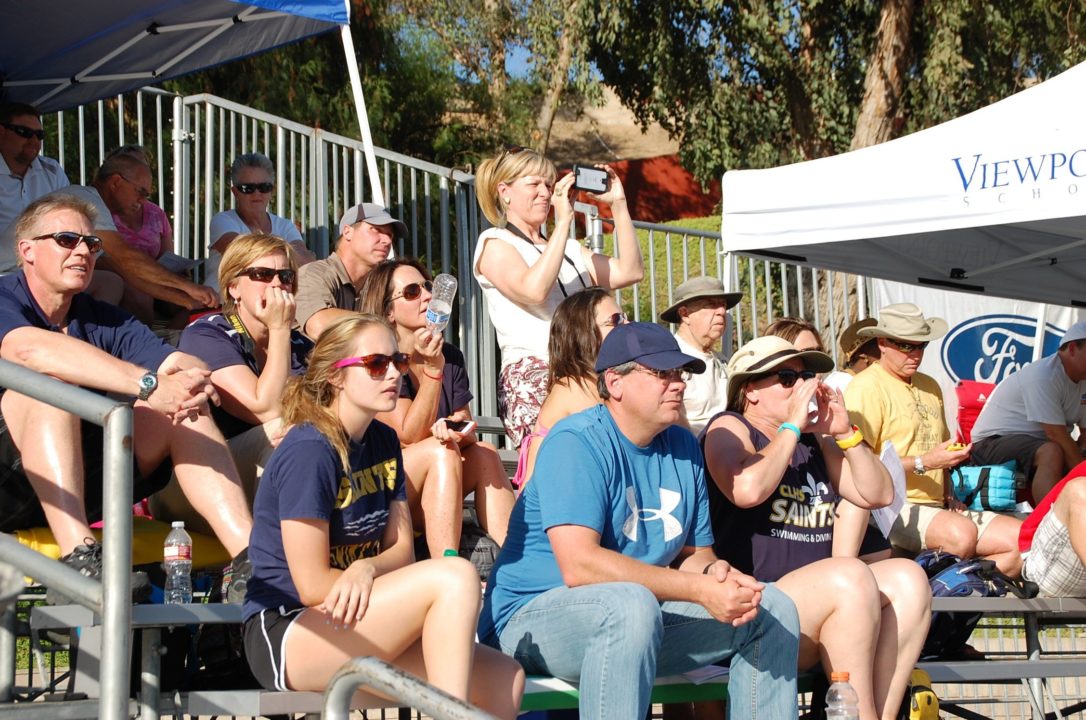 This post was originally posted at YourSwimBook.com. You can join Olivier’s weekly motivational newsletter for swimmers by clicking here. They... Current photo via Anne Lepesant

This post was originally posted at YourSwimBook.com. You can join Olivier’s weekly motivational newsletter for swimmers by clicking here.

They are in the stands, they are behind the blocks timing, they are manning the snack trays, the timing booth and the carpool. They are equipment managers, board members, financiers of dreams, expert managers of towel drying operations, and our biggest cheerleaders.

They are your local swim parents.

And as an informed and involved parent it’s natural to be curious about your child’s swimming.

With all the time your kid spends swimming back and forth, around and around the black line you want to make sure that they are getting the most from the sport, their time, and their energy as possible.

Here are 6 of the most common questions swim parents ask:

1. How fast will my little swimmer be?

The meet over the weekend went well, really well, in fact. Your little swimmer dusted the competition, won first place in half her events, and set a couple club records along the way.

Even though she is 10 years old, you are starting to get ideas of collegiate scholarships, international medals, and having a conversation over dinner with her at some point about making the decision to go pro.

But, as we know from our own experience we sometimes grow apart from the things we love when we are 10. What she is interested in now will change.

And interestingly enough, just because she is setting NAG’s at the same pace that Michael Phelps was at the age of 10 doesn’t mean she will be still doing it when she is 18.

USA Swimming’s own research showed that 10 and under “wonders” who ranked top 16 in the country were only 11% likely to still rank highly as 17-18 year olds.

2. How many practices should my swimmer be going to? Is the more the better?

It’s a fine balance, and there is no one-size-fits-all answer. After all, it depends on many different factors from training background, to what kind of training the athlete is doing, to their aspirations in the pool.

At its core, the number of practices your swimming should be going to should reflect progression and balance.

After all, suddenly jacking up the number of weekly workouts from 6 to 10 will cause more problems than it will solve. Beyond destroying the swimmer physically, mentally it is tough to escalate commitment so quickly overnight.

Allow the swimmer a chance to adapt to performing 7-8 workouts a week before leveling up any further.

Similarly, having some sense of balance is one of the things that will keep swimmers from burning out over the long term. We see how Tiger Woods’ father groomed him from an early age and fall for the belief that this is the only way that champions are made. Not so.

3. What age should my child specialize?

It’s a bit of a running joke that most swimmers lack out-of-the-pool coordination and athleticism, which I don’t think is terribly accurate if you see swimmers like Nathan Adrian, Caeleb Dressel or Natalie Coughlin doing dryland. These swimmers are exceptional athletes out of the water as well in it.

But the generalization persists, perhaps because many swimmers specialize so early. The requirements of training end up creating this demand, with swimmers often training 20+ hours per week by the time they are 12 years old.

With this type of training load, in addition to school it doesn’t leave a lot of room for other sports.

Which is too bad, because general athleticism means that our young swimmers will be better rounded out athletes. Will be less likely to burn out. And because they can do more than just pull and kick in the water they will be better prepared to avoid injury when it comes to performing physical activity outside of it.

4. My kid shows up to practice every day. Why isn’t he swimming like “insert-elite-swimmer’s-name-here”?

Swimming, when performed at its highest levels is supremely graceful.

The best simply make it look so easy. Alexander Popov, Matt Biondi and Ian Thorpe all had freestyles that made it appear so effortless, that it launched a million daydreams–

“Looks easy, surely my child who trains a few times a week can do it too!”

That effortless performance is the result of thousands upon thousands of hours done with relentless attention to technique.

It’s unrealistic to expect an age grouper with a couple years of part-time training under their belt to be able to emulate some of the greatest swimmers of our time.

5. Why is the performance of my little swimmer plateauing?

Getting better in the pool almost never happens smoothly. It doesn’t happen in a gradual incline that is perfectly representative of the work that was being done in practice. It’s a jagged, fitful line that generally trends upwards, but has sections where it plateaus or even drops.

The work is done in baby steps, in small increments during their swim practices. But the improvements end up usually manifesting themselves in leaps and bounds, creating unrealistic expectations that this is the way it should always be.

Keep in mind that spikes in performance are just as often a result of psychology as physical preparation.

One of the most challenging aspects in coaching is how to have a swimmer trulybelieve that they are the kind of swimmer that their training background represents.

It’s stunning how you can watch an athlete drop 5 seconds overnight simply because mentally they have made the adjustment necessary to be that faster swimmer. This element alone adds a layer of unpredictability of performance that goes beyond what they are doing in practice.

Inconsistency in improving is okay, and it is natural. Swimming requires a blind act of faith that the work that is happening in practice will eventually pay off, even though it is not always immediately apparent.

6. Why does my swimmer perform almost as fast in practice as in meets?

When viewed on the surface, this doesn’t make any sense at all.

How on earth could a swimmer perform just as fast, from a push, at the tail-end of a 5,000m practice as when they are fully rested, going from a dive, in a high performance setting?

But there are circumstances in practice that encourage fast swimming:

They are fully and completely warmed up. By the end of practice they have gotten their stroke and rhythm dialed in. All of their energy systems are in play. And perhaps most importantly, they can reach down and swim as fast as possible without the pressure and the “all-or-nothing” thinking that arises during competition.

It includes a ten month log book, comprehensive goal setting section, monthly evaluations to be filled out with your coach, and more.