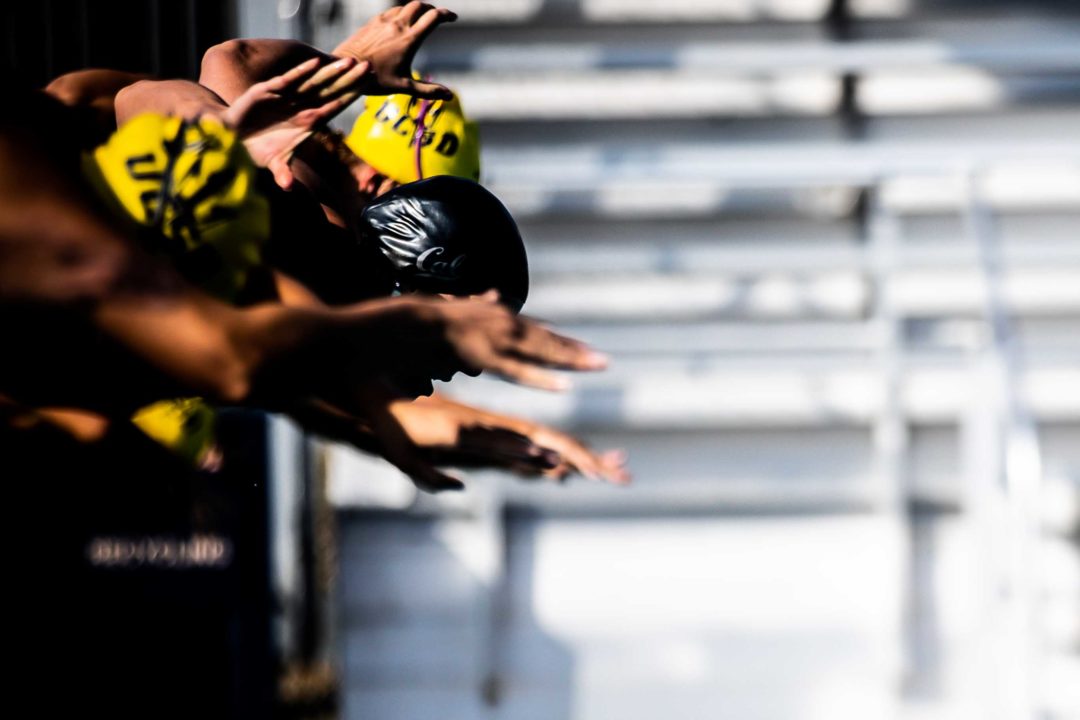 With about 8,500 splashes in the USA Swimming database, approximately 58% of times have come out as new personal bests so far. Stock photo via Jack Spitser/Spitser Photography

If you’ve been noticing a lot of best times in the first few meets to trickle back onto the books this month as USA Swimming has begun sanctioning events this month, you’re not wrong.

As of Friday, 23 meets have been updated to the USA Swimming SWIMS times database. 22 of those are sanctioned, and the 23rd is an observed meet.

Among those meets, there have been around 8,500 splashes, and according to USA Swimming’s Director of Analytics Patrick Murphy, about 58% of those swims so far have been new lifetime bests.

While Murphy and his times & data counterpart Larry Herr cautioned that a significant number of those time drops have been from younger swimmers and swimmers in the “BB/A” range on USA Swimming’s Motivational Time Standards chart, anecdotally, more elite swimmers around the country and the world have been doing the same.

Two Examples, among many:

In my conversations with coaches, these have been the 6 most popular theories so far:

1. Swimmers Are Simply Maturing – The simplest explanation, and in the younger age groups probably a contributing factor, but kids grow and get stronger. This is the nature of them. So, in 4 months since their last races, they might just be getting bigger and stronger.

2. They Got Stronger from Doing Dryland – Most of the clubs that are organized enough to put together meets so far probably had well-organized dryland training plans while their swimmers are out of the water. For younger swimmers especially, who may have done little-to-no dryland training to this point, this could result in pretty substantial strength gains even in 4 months, especially when combined in a dramatic reduction of calorie-burning cardio.

3. Unwinding Overtraining – The most fundamental paradigm being discussed is whether or not young swimmers are being overtrained and under-rested. This conversation has forked into a number of different directions. Some are looking at having longer breaks between seasons rather than just the two-week turn-and-burn that is becoming more-and-more common after championship meets. Other coaches are exploring whether they should be giving young swimmers longer tapers, or maybe more intermittent short “drop taper” rest periods throughout the season, as has become increasingly-popular at the NCAA level. But, if nothing else, it’s evidence that a little time away from the pool doesn’t have to be the training-death-sentence that I was raised to believe it was.

4. Excitement of Racing – Life has been rather dull lately, with lots of time spent with parents for young swimmers. Suddenly, meets are shifting from “a whole weekend lost” to “finally, something to do this weekend!” Could this excitement to get up and race, be competitive, and do something with drive be enough to explain the drops? It certainly seems like it’s at least a contributing factor.

5. Reduced Stress – Yes, the coronavirus and the quarantine has brought on a lot of new stresses. Uncertainty about school, uncertainty about jobs, and the stress of the unknown, for example. But in other ways, it has relieved a lot of burdens on young people. A lot of the social pressures have been relieved, the “go-go-go” has been turned to maybe just a “go” or even a “no-go,” depending on where young swimmers live. These small intrasquad meets have a lot less pressure than a huge Sectionals meet. Stress can create diamonds, but stress can also crack steel. Maybe young swimmers need ‘stress tapers’ too.

6. Smaller group Coaching – While there are exceptions, most teams that have returned to the water have done so with smaller training groups. In some cases, much smaller training groups of 10 or 12 in the water at a time. Most coaches in the country would agree that smaller group training that allows for more individualized work and one-on-one stroke work is a benefit to swimmers. That’s why we charge such high rates for private lessons, right? So, it’s not a big leap to assume that the smaller groups driven by the quarantine can lead to improvements in stroke technique and training focus.

Whatever is happening, it’s exciting as heck. While it’s going to be a while before swimming looks like it used to, at least we know that there is a light on the other side of the tunnel in the form of a world where best times are still possible, even with the disruption of the coronavirus.

As a master’s coach, I find this fascinating and awesome. I hope we learn from this in a positive way for the future training of young athletes. So cool!

Recently I’ve read a million articles about fellow swimmers that went best times and felt a bit like “that wouldn’t be me.” This makes me feel more hopeful because many of the theories apply to me. My team still can’t train a lot (I only get to swim like 3 times a week) but I’m happy in knowing that soon, with a bit more training, I could crush my PB’s! Here are some more theories I have: 7. Getting good at doing things outside of the pool that can help you, like nutrition, sleep and recovery. 8. More focus on technique; reflecting on your technique and learning new things about technique. Or, just reflecting on things you can do better,… Read more »

I barely even get to swim still