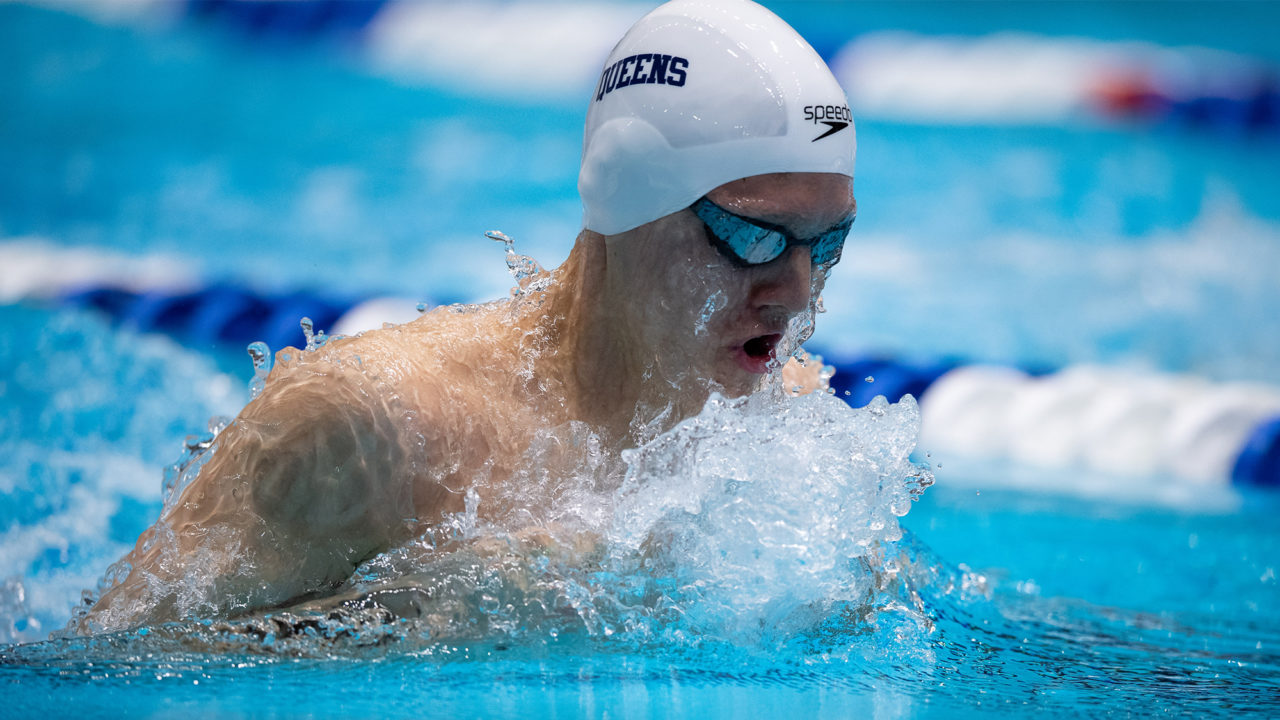 Queens has achieved 8 NCAA Division II A cuts through Day 3 of the BMC Championships. Both the men and women lead the meet. Archive photo via Photo courtesy ZBJ Photography

Queens continued their dominance as they placed six swimmers into the A final of the 500 freestyle going 1-2-4-5-6-8. Monica Gumina led the way touching in a time of 4:47.98, achieving the NCAA Division II A cut and solidifying her spot at NCAAs. Teammate Sophie Lange finished second in a 4:52.84.

Vladyslava Maznytska of Queens won the 100 backstroke in 54.43 by over a second. She was seventh in the event last year at NCAAs. She was just off of her prelims time of 54.36. Teammate Caroline Lawrence touched second in 55.49.

Kailee Morgan of Carson-Newman had a huge swim in the 100 breaststroke, dropping over half a second to win the event in a time of 1:00.89. That time earned her the NCAA Division II A cut as well as the BMC record. Morgan finished second in the event at the 2021 NCAAs with a time of 1:01.44. Danielle Melilli of Queens touched second in 1:01.51.

The 800 freestyle relay closed out the night and Queens dominated the event winning by over 15 seconds. The A team for Queens touched in a time of 7:20.16. Monica Gumina led off the relay in a 1:48.56 to give the Royals a huge lead. All four members swam the fastest splits of the field as they were all under 1:52.

Luke Erwee of Queens won the 500 freestyle in a time of 4:25.08. Erwee finished second at NCAAs last year in the event as he went a 4:23.20 at finals. Erwee has the potential to win the event as last year’s winner Fabio Dalu has since transferred to Division I Ohio State.

Queens went 1-2 in the 100 backstroke. Alexander Bauch led the way touching in a 46.64 also achieving the A cut in the process. Finn Howard touched second in 46.90.

Fedor Sokolov of Wingate won the 100 breaststroke in a time of 54.16, over half of a second faster than his prelims time. Balazs Berecz of Queens touched second in 54.66, and teammate Jan Delkeskamp finished closely behind in a time of 54.69.

The 200 butterfly was a huge race for the Queens men as they went 1-2, achieving two A cuts in the process. Alex Kunert touched first in 1:43.92 and was followed by Yannick Plasil who touched in 1:44.62. Kunert will look to defend his NCAA title this year. Plasil finished third in the event at NCAAs last year.

Queens won the 800 freestyle in commanding fashion finishing in a time of 6:27.44. Alex Kunert anchored in a 1:35.24, the fastest split of anyone in the field. All four members of the relay won the NCAA title in the event last year.