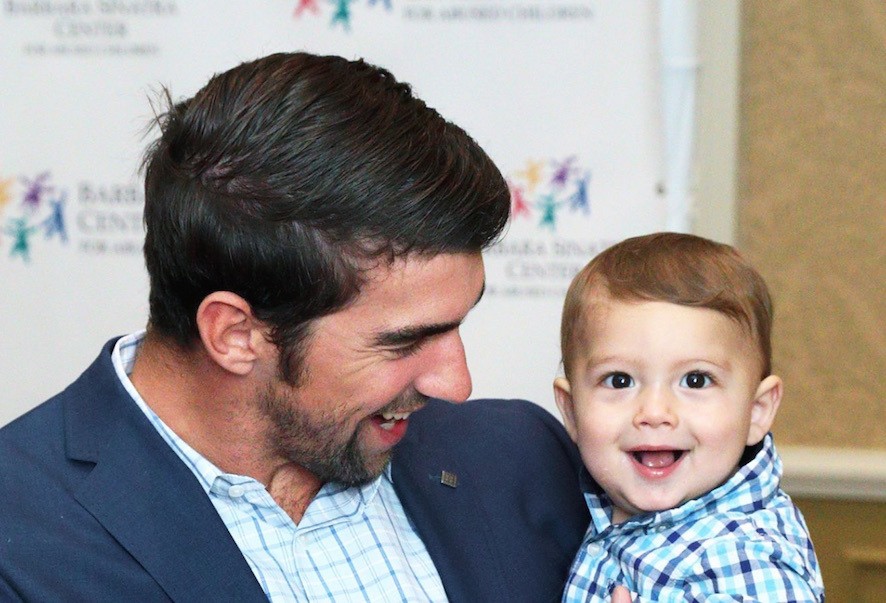 I was fortunate to hear Michael Phelps speak last week, sitting with my fellow swim moms and Masters swimmers. It was a benefit for the Barbara Sinatra Center for Abused Children in Rancho Mirage, CA which provides abuse prevention and counseling for children at no cost to their families. Phelps was the keynote speaker and was interviewed by NBC’s Sportscaster Alex Flanagan, who has covered some of Phelps’ Olympic performances. He also spent time with our area’s age group swimmers before the event.

The interview covered lots of territory from his childhood days, through his Olympic career, struggles with depression to becoming Boomer’s dad. My favorite part of his interview was Phelps talking about his mom with pride and love.

Here are a few things Phelps said about one of my favorite swim moms, Debbie Phelps:

“The most powerful mom.”

According to Phelps, “My mom raised us single-handedly, raised me and my two sisters. Growing up, I learned from her example about hard work and dedication.”

“My Mom means the world to me.”

Seriously, is that the best thing we could ever hear our own children tell us?

In the sports parenting world, Phelps said, “She didn’t tell me what to do.” When he told her “I don’t want to do this anymore,” she asked him, “What are you going to do for a job?” At the time, he was busy with four sports in high school. He thought about that question and decided to swim full-time.

“She was always there for me.”

We’ve witnessed Debbie Phelps in the stands, cheering for her son, just like we cheer for our children. She’s the mom we should epitomize and learn from. She’s there for her son, doesn’t force or push—and he cherishes her.

He learned about sports parenting from his mom.

When asked by Flanagan, if he wanted to see Boomer swim, he answered, “I want to make sure he’s pool safe, number one. Boomer’s had a few lessons already. But, I’d rather see Boomer in The (PGA) Masters with a two-shot lead,” Phelps joked. “We’ll see what he chooses.”

Phelps didn’t play 4 sports in high school. By the time he got to high school he was only swimming. He played little league and lacrosse, but gave that up around 11 or 12.