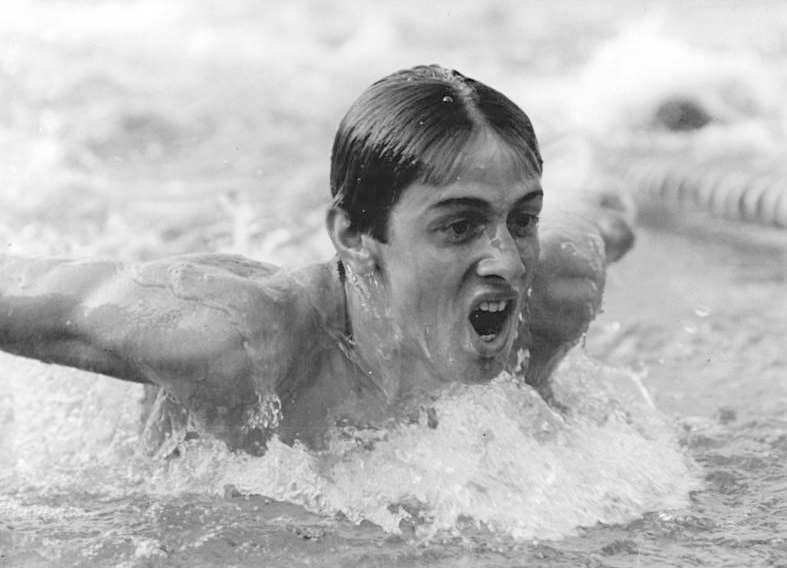 Roland Matthes swept the 100 and 200 backstroke for East Germany at both the 1968 and 1972 Olympic Games. Archive photo via Wolfgang Kluge/German Federal Archive

8-time Olympic medal-winning swimmer Roland Matthes has died at 69-years old, according to the German Swimming Federation. He died on Friday in Wertheim after a short, but serious, illness.

During his career, Matthes was one of the most dominant backstrokers in history, which included sweeping the 100 and 200 meter backstrokes at both the 1968 and 1972 Olympic Games.

After retiring from swimming, Matthes worked as an orthopedic surgeon. He was awarded the Golden Sports Pyramid in 2004 for his lifetime of achievements and shortly thereafter became the first former GDR (East German) athlete to be inducted into the German Sports Hall of Fame.

“The news of Roland Matthes’ death fills us with great sadness. Our condolences and sympathy go out to his family,” said Uwe Brinkmann, Vice President of the German Swimming Association (DSV). “Roland Matthes was not only one of the most successful swimmers in sports history, but also a helpful person who always wanted to build bridges – within Germany between East and West as well as between the older and younger generations of athletes. We will remember him as a great role model.”

While Matthes swam in an era where many East German swimmers have later admitted to participation in a systematic state-sponsored doping system, Matthes denied his involvement, saying that his club was too small to participate in the scheme.

Oh man, that’s sad. He was untouchable in backstroke in his prime. Beautiful stroke. Pretty scrawny, too, so I never bought that he was doping. https://www.youtube.com/watch?v=sChj-Qfo-vk

Worth remembering leistungssportbeschluss wasn’t until 1969 anyway. That heralded the start of the doping programme in the 70s.

If in 1968 you were at the age capable to judge the quality of the stroke then how old are you now? 90?

Ol’ Longhorn is 34 and watches a lot of tape. Don’t be making ageist comments.

I am 71 and was not a swimmer then, and yet it was obvious to me that he had a quality of strokes far better than the rest of the field. Likewise, you don’t have to be a tennis specialist to appreciate Federer’s strokes.

This article is a tribute to outstanding swimmer. Let it be this way. Just was surprised by the age of this commentor.

What part of “Ol’” did you not understand?

Roland Matthes was 69 years old. He was young in Mexico. As for the drugs one can not know. It was the government pushing it. He was certainly the king before Aaron Perisol of backstroke,

That is a nice video. Him looking for walls at the turn and finish was funny. Smooth and easy – he must have had a killer kick. Swimming was very popular in East European socialist countries. I followed him and Ender and many others. Always wanted them to beat “hated” Americans [propaganda worked both ways]. Sport was a way to show the world we were better than *them* – which lead to government sponsored/approved doping programs. No side was clean and no side is clear EVER. The level of propaganda in USA is/was excatly the same as level of propaganda in socialist countries. The only difference is, these are the masters of propaganda here, so they make you think as… Read more »

There is no state sponsored doping program in the US and never has been. That’s a huge distinction. There are cheaters in the US, but two sides are not the same. “Everyone cheats” is what the cynic says to give himself permission to cross the line. I’ve been in swimming nearly my whole life and swam in several elite programs. Never once have I had suspicions about a teammate, much less had firsthand knowledge of doping. There were unconfirmed rumors about a couple of swimmers, but none that I ever trained with or knew well. I know there are cheaters. I’m just saying in my experience it is not common.

The Rolls-Royce of backstroke.

Yes, definitely not the Trabant…

Probably the greatest backstroker of all time, and the only one to ever achieve the Olympic double double. (Lochte prevented Piersol from achieving that feat by beating him in the 200 back in ’08.) Agree with Ol’ Longhorn, he didn’t seem to be doping even though the latter part of his career overlapped with the DDR doping era. (His build never changed appreciably, and his ’68-’72 triumphs preceded the doping era.)