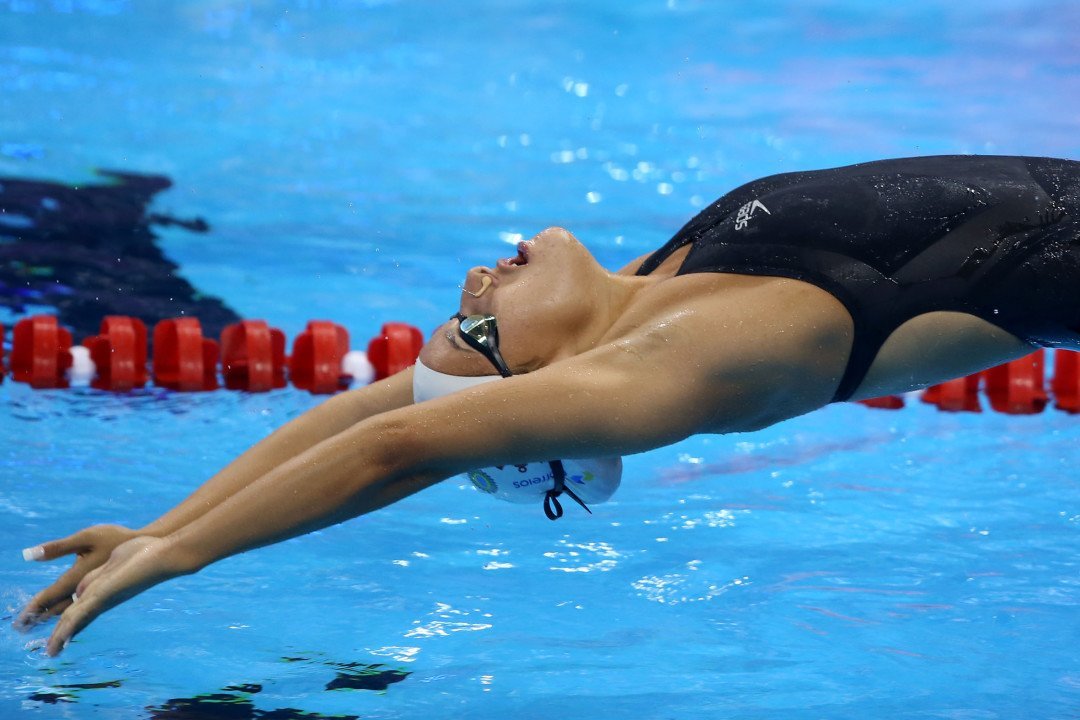 With the final round of relay qualifying for the 2016 Rio Olympics closing on May 31, Brazil has officially qualified two more relay teams, adding 3 relay-only swimmers to its Olympic roster. Archive photo via Satiro Sodré/ SSPress

With the final round of relay qualifying for the 2016 Rio Olympics closing on May 31, Brazil has officially qualified two more relay teams, adding 3 relay-only swimmers to its Olympic roster.

Brazil added a women’s 4×100 medley relay and a men’s 4×200 free relay to its Olympic relay entries, and now will have entries into all 6 relay events at their home Olympic Games in August.

That adds three swimmers to a Brazilian roster that was already the nation’s largest Olympic swim team ever:

Pereira was the 4th-place finisher in the 200 free at Brazil’s national championships (the Maria Lenk Trophy) in April. He’ll join Nicolas Oliveira, Joao de Lucca and Luiz Altamir on the national 800 free relay team. Oliveria and de Lucca were both already qualified for the Olympic roster in multiple events (Oliveira for the 100 and 200 frees, plus the 4×100 free relay; de Lucca for the 200 free and 4×100 free relay) and Altamir had already qualified in the 400 free.

De Luccas will join the 4×100 medley relay. She’s the second-best 100 backstroker in the qualifying season at 1:01.11, with Etiene Medeiros sitting first in 1:00.00. Medeiros already has a pretty full Olympic schedule, so de Luccas should be able to swim during prelims and/or finals to lighten the event load on Medeiros.

De Luccas is also the nation’s top 200 backstroker, and will now be able to swim that event in Rio.

Conceicao is the nation’s top 100 breaststroker, and should fill that slot on the medley relay as well as be Brazil’s only entrant in the individual event.

Here’s Brazil’s updated Olympic roster, including the likely swimmers on the two newly-added relays. The new swimmers and relays are indicated in bold.

That is a hot topic on Brazil swimming, everybody thinks Pereira should swim the 400 IM.. he can make the A cut, no doubts, but if he is not training for that event he might miss final or he might have the same problem Phelps had on 2012 400 IM..

Tell me how he isn’t good enough to go 4.08 again ? His fly is 52, his back is 1.57/53 and his breaststroke is amazing imo….
Disappointed I won’t be seeing him in Rio on 400im. For such a good swimmer, one Olympic silver seems well poor. Compared to lochte and cesh. I think most people would say he is in the same leagues if u watched him swim individual strokes, truly great swimmer.

Thiago pereira ????????
Great swimmer, but would love to know his understanding of taking on phelps / lochte / hagino in 200im with his freestyle (which is awful if we’re been honest), at a home games he is going to want to medal but no 400? at least in the 400im there’s a medal chance and it’s realistic. 200im forget it. The two best off all time and best versatile swimmer in world right now…. Once again Thiago is mr 4th.

Jared, Natalia must swim the medley as she cannot swim the individual 100 back (She does not have fina A cut, while Etiene has). Natalia could only swim with her B time if Etiene gave up her individual qualification slot

Thanks for the clarification, Rafael. We missed that in translating Brazil’s announcement from Portuguese. We’ve updated the story accordingly.

Jared, Natalia de Luccas will swim the 200m back, since she has fina B cut and no other brazilian will swim this event. Also, the name of Gabriel Santos is missing (the federation has announced five swimmers for the 4x100m men’s relay, and he has the 5th time). Brazil’s roster has 33 names.