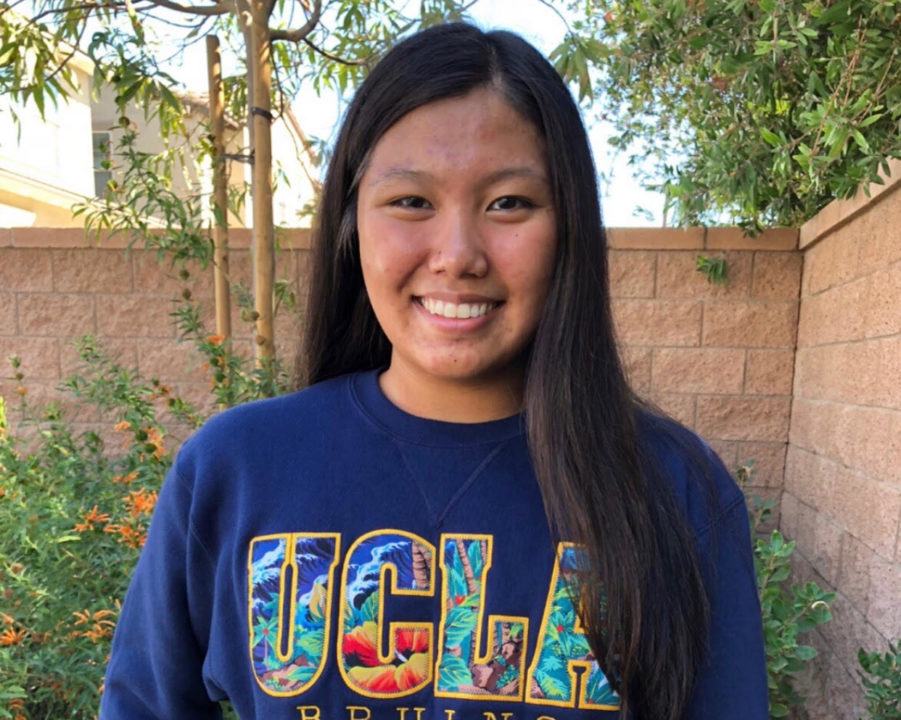 UCLA's Stephanie Su kicked off the individual races of the day by breaking the pool record in the 1000 free. Stock photo via Stephanie Su

LA JOLLA, Calif. – The UCLA swim and dive team opened its 2020 calendar year with a strong 184-78 win over UC San Diego on Friday afternoon at the Canyonview Aquatics Center.

The victory extended the Bruins’ season-opening winning streak to six. Despite not having competed since late November, Friday’s margin of victory was UCLA’s largest of the season so far.

A pair of freshmen set pool records on Friday to highlight the UCLA win.

First, Stephanie Su won the 1000 free with a time of 10:11.34 to establish a new standard for Canyonview. Then a few minutes later, Sophia Kosturos broke the pool record in the 100 back with a time of 54.80.

Overall, a Bruin won 11 of 12 individual events against UCSD (1-3). A total of 10 different swimmers recorded victories for UCLA across those 11 events.

Sophomore Claire Grover was the lone swimmer to pick up multiple wins, as she claimed the crown in both the 50 free and 200 breast.

After finishing second in the 200 medley relay, Su got the Bruins back on track with her record performance in the 1000 free. UCLA finished 1-2-3 in that event, as Su was followed by freshman Lauryn Johnson (10:17.41) and sophomore Katie Sulkevich (10:20.23)

In the ensuing race, Kosturos logged her record time in the 100 back to give the Bruins a third consecutive event win.

Senior Amy Okada sent the Bruins into the first break of the session on a high note, claiming the 200 fly title at 2:03.65 and starting a string of eight consecutive wins for UCLA.

After the break, Grover sprinted to a first place finish in the 50 free with a 22.99, the only swimmer to break the 23-second mark. Maisie Jameson (23.94, third) also scored for the Bruins.

Grover avenged UCLA’s second-place finish in the 100 breast by winning the 200 breast at 2:18.16. Hawkins would go on to win the 500 free at 4:58.88 to give UCLA a sweep in the distance events before freshman Gabby Dang claimed the 100 fly title at 55.60 to hand the Bruins a commanding lead heading into the final two events.

UC San Diego finished the meet with first place finishes in both relay races as well as a narrow victory for Katja Pavicevic in the 100 breast, beating out Rhee by just two-hundreths of a second.

UCLA returns to action next weekend with an away dual meet at Pac-12 rival Washington State on Saturday, Jan. 11 at 11:00 a.m. The Cougars are 3-3 so far on the season.

The Tritons kicked off the meet with a win in the 200-yard medley relay. The team of Jordan Phillips, Grace Murphy, Miranda Renner and Brittney Miles took first with a new pool record time of 1:43.24. In the 200-yard freestyle relay, Miles, Murphy, Amanda Rios and Cody Hargadon placed second, just .17 seconds off of first.

Katja Pavicevic won the only individual event for the day for UC San Diego. The freshman touched the wall first with a time of 1:04.27 in the 100-yard breaststroke. Pavicevic had another podium finish in the 200-yard breaststroke and edged out teammate Murphy for second place.

About UC San Diego Athletics
With 30 national team championships, nearly 150 individual titles and the top student-athlete graduation rate among Division II institutions in the United States, the UC San Diego intercollegiate athletics program annually ranks as one of the most successful in the country.  The Tritons sponsor 23 intercollegiate sport programs that compete on the NCAA Division I and II levels and, in summer 2020, will transition into full Division I status as a member of the Big West Conference.  UC San Diego student-athletes exemplify the academic ideals of one of the world’s preeminent institutions, graduating at an average rate of 91 percent.  A total of 82 Tritons have earned Academic All-America honors, while 37 have earned prestigious NCAA Post Graduate Scholarships.  In competition, more than 1,300 UC San Diego student-athletes have earned All-America honors.