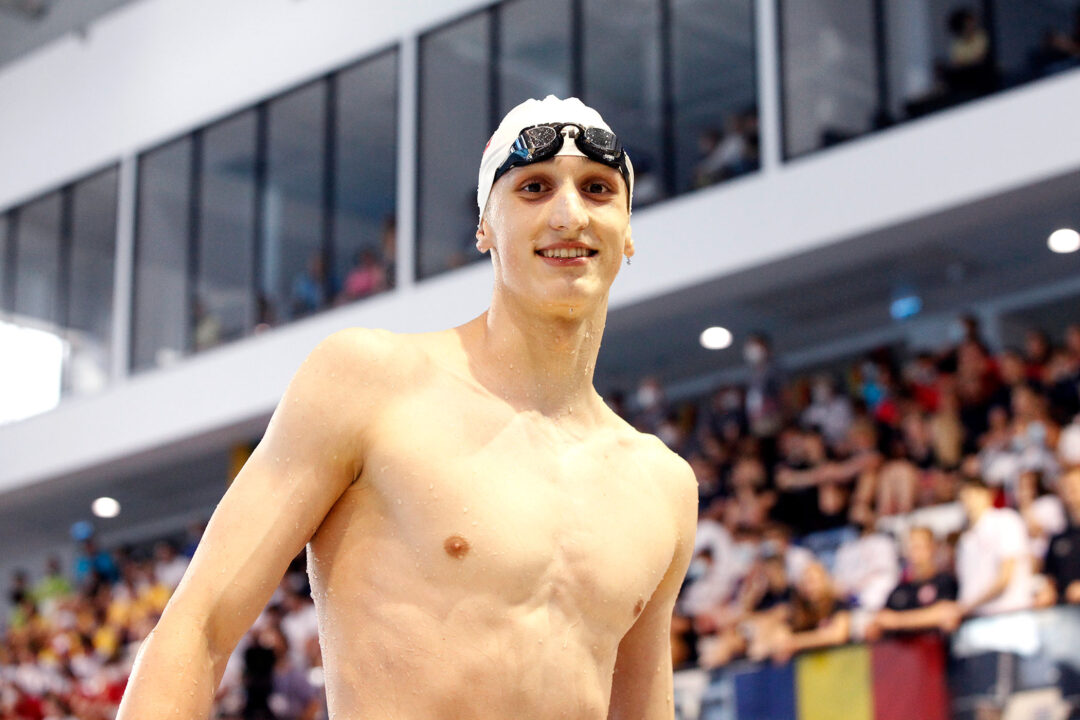 Ksawery Masiuk is the top seed in the boys 50 back this morning, just ahead of South Africa's Pieter Coetze. Stock photo via LEN/Simone Castrovillari

The 3rd prelims session of the 2022 World Junior Championships will feature heats of the girls 50 fly, boys 50 back, girls 100 breast, boys 50 free, girls 200 back, and mixed 4×100 free relay. Additionally, the boys 800 free will be held today as a timed finals event. The slower heats of the 800 will be swum during this prelims session, while the fastest heat will take place during tonight’s final.

Of course, after David Popovici wowed us with a 47.07 leading off the Romanian boys 4×100 free relay on night 1, we’ll be waiting to see if he can remake his magic on the mixed 4×100 free today. Romania is entered as the #2 seed in the event, and assuming they opt to lead Popovici off again, we know they’ll get out to a lead. Additionally, with Patrick Sebastian Dinu splitting 49.47 and 49.50 on the boys 4×100 free relay, we know Romania will have the fastest male duo in the field.

We’re not done with Ksawery Masiuk/Pieter Coetze backstroke duels yet either. After Coetze broke the World Junior Championship Record in the 100 back in semifinals on day 1, Ksawery won gold in the final last night, breaking Coetze’s day-old mark. The pair will now go up against each other in the 50 back, starting with this morning’s prelims. Masiuk is the top seed, coming in with a sizzling 24.48. He’s just ahead of Coetze, who has been 24.74 before. The pair come in to the meet as the only swimmers in the field under 25 seconds.

After winning the girls 50 breaststroke last night, Poland’s Karolina Piechowicz enters today as the top seed in the girls 100 breast. She comes in at 1:08.93, coming in as the only swimmer in the field under 1:09.

There looks to be a similarly exciting battle brewing in the girls 200 back, where Hungary’s Dora Molnar enters as the top seed (2:09.34). She’s followed closely by Poland’s Laura Bernat (2:09.81). Also in the mix is 400 IM champion Mio Narita (Japan), who broke the Championship Record in the 400 IM on night 1.