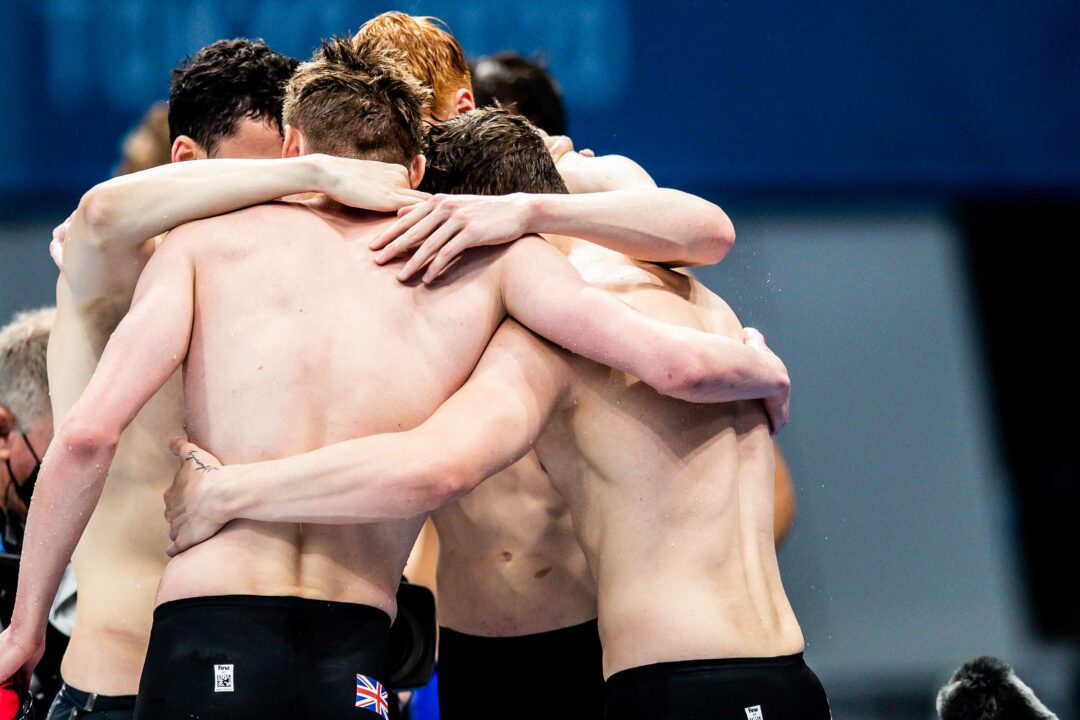 We're entering the penultimate night of finals at the 2022 British Swimming Championships, with Budapest bids on the line. Archive photo via Jack Spitser/Spitser Photography

After today, we’ll have just one day left of these 2022 British Swimming Championships the meet which represents the Trials for both World Championships and Commonwealth Games.

A minimum time of 7:49.58 was set forth by British Swimming for this summer’s FINA World Aquatic Championships.

Hitting the time pad in 27.83, Cox beat out the 100m backstroke winner here Medi Harris by just .01, dipping under the 28-second threshold for the first time in her career. Cox now ranks as the 6th fastest British performer of all time.

National record holder Kathleen Dawson rounded out the top 3 in 28.31 this evening.

No additional female made the grade for Budapest in the individual 100m back here earlier, however, with the top swimmer, Harris, clocking 59.95 when British Swimming mandates a 59.02.

21-year-old Lewis Burras earned the sprint king crown by doubling up on his 100m free victory with a 50m free gold here.

Burras of Winchester produced a personal best of 21.77 to top the podium, beating out ‘the hulk’ who is British national record holder Ben Proud. Proud, unrested, as he is already pre-qualified in this event, snagged silver in 21.91 while veteran Adam Barratt wrapped up bronze in 22.52.

It was just this past December when Burras established his new lifetime best in the splash n’ dash, a mark of 21.79 at a local Winchester meet. On a British historical swimming scale, his result sits only behind Proud who owns the national record in a time of 21.11 from 2018.

Although she snagged the top seed out of the morning heats, North Carolina State University-commit Tamryn Van Selm dropped down to finish 4th in this women’s 400m free event, registering a time of 4:13.95.

Soaring to the top of the podium was two-time European Short Course Championships gold medalist Freya Anderson who touched in 4:08.46 for a decisive win.

Edging out Freya Colbert, Anderson bumped herself up from 2nd after the prelims to now the gold medalist here.

Anderson is prequalified for Budapest for relays but is chasing an individual event addition here, while Colbert already nailed a big-time personal best in the 200m free.

Scotland’s most decorated Olympian of all time Duncan Scott simply does not disappoint, putting up a swift 1:56.08 to decisively win the men’s 200m IM here at the British Championships.

Beating a stacked field by over a second, Scott logged his fastest time of 2022, beating out the 1:56.33 Chinese Olympic champion Wang Shun posted last September to take over the world rankings.

In fact, this outing here ranks as versatile Scott’s 3rd fastest outing of all time. His national record sits at the 1:55.28 he produced at the 2020 Olympic Games, while he also hit 1:55.90 at last year’s British Olympic Trials.

Tom Dean, the 200m free Olympic champion, already qualified in the men’s 100m free here for the 2022 FINA World Aquatic Championships but now the Bath swimmer adds this 200m IM to his agenda as well.

Olympic finalist Abbie Wood is already pre-selected in this 200m IM event, but she put forth a solid effort nonetheless.

Touching in 2:11.03, Wood beat the field by over 2 seconds, with mainstay Lily Booker hitting 2:13.41 for silver while the 200m backstroke champion here Katie Shanahan posted 2:13.63 to round out the podium.

Is there a running gag with which I’m woefully unfamiliar or something? Why are swims being labeled ‘monster’ everywhere? In terms of distance from WR, a 21.77 50FR is equivalent to a 48.55 100FR… is that ‘monster’? It’s good, perhaps could be described as solid, but ‘monster’? Even his previous 21.79 was labeled as ‘monster’ later in the article. Matt Sates’ 1:46.15 200FR was also described as ‘monster’ in a recent article headline.

Lukas Martens swam a 3:41.60 400FR today, truly a monster swim, and there wasn’t a single adjective used in the entire article to describe the time.

People are excited about swimming, just let it happen

Huge age group record in the 200im for Phoebe Cooper – 2.17.19, taking over a second off of Katie Shanahan’s previous mark. Her ‘fly once again looking effortless, out in 28.4!

I predict a mid 1:44 from both Duncan and Tom

He looks really fit, but I’m not sure what to expect as before today we hadn’t seen a tapered 200im from him since 2019.

Wouldn’t draw a direct line with that swim, he got out of the pool disappointed after getting a bit over-enthusiastic and sprinting from the first stroke. He was also still primarily an IMer then.

Also Dean under the 200IM consideration time…wonder if he’ll choose to 100 free or 200IM because they’re in the same session at worlds. (Lowkey hoping he does the medley so Whittle can do 100 free ooop)

Freya has the gold from the heat swim of the mixed medley, as Wilby as the silver in the men’s medley – I think that gets them on the plane.

Selection says those who swam final for medal winning relay.

Wilby on plane due to 200breast, not relay heat

Duncan’s time in this 200IM will be interesting to see how much he’s tapered for this meet.