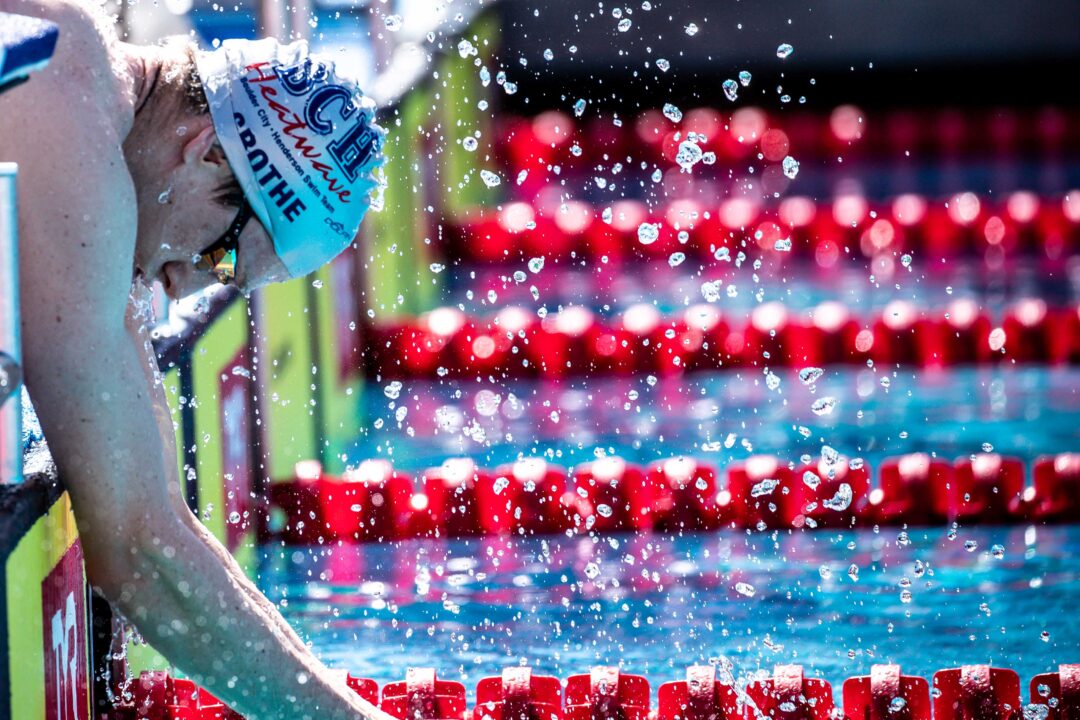 Zane Grothe enters the opening night of the 2021 Pro Swim Series – Indianapolis as the top seed in the men's 1500 free. Archive photo via Jack Spitser/Spitser Photography

The women’s and men’s 1500 freestyle kicks off the fourth and final Pro Swim Series meet of 2021 in Indianapolis, with a total of four heats on the docket.

The heats will alternate women/men/women/men.

Ally McHugh and Zane Grothe enter as the top seeds.

Ally McHugh ran down early leader Emma Nordin over the final few hundred meters to ultimately win the fastest heat of the women’s 1500 free in 15:59.54, marking her first time under the 16-minute threshold.

McHugh, 23, came into the meet with a personal best time of 16:02.56, set at the 2018 U.S. Summer Nationals. She now takes over eighth in the world for the 2020-21 season, and is also the second-fastest American behind top-ranked Katie Ledecky.

Sierra Schmidt, who recently announced a move to Arizona to train with her father until next month’s Olympic Trials, rounds out the top three in 16:06.85, lowering her previous best of 16:10.12 from 2019.

It was a wild three-man race in the men’s 1500, with Ohio State’s Charlie Clark taking full advantage of getting moved up to the fastest heat after Marwan El Kamash scratched out.

Clark, originally scheduled to swim in Heat 2 with three others, went out with top seed Zane Grothe and Club Wolverine’s Ricardo Vargas and stuck with them for the entirety of the race.

Vargas fell off the pace ever so slightly towards the end of the race, touching third in 15:23.13. That marks his fastest swim since August of 2019.

None of the men broke the women’s 1500 free PSS record. Not that it’s news, but good LORD Katie is a monster.

only thing weaker than the US men’s 100 breast field…..is the distance freestyle field

Grothe’s time here is 0.48 slower than the women’s WR, I don’t see him making any finals at the Olympics unless he gets close to his PBs

He’s not making the team in the 1500… Finley and wilimovsky are definitely ahead and at least dinked is a real medal contender. Don’t know if Zane will make the 800, either.

I think Fink and Wilson will be under 59 this summer but definitely no threats to Peaty, Kamminga and Shimanovich.

After I saw the results I wondered what happened to the US mens distance swimmers. The men’s 1500 seems to be in a death spiral for some odd reason.

Apart from Ledecky only 6 U.S. swimmers (including Janet Evans 23 years ago) were ever under 16 minutes. And 3 of them are long retired. 6 of 31 worldwide. Isn’t it a time for American swimmers to be more competitive in this event? There are no more excuses that this is not an Olympic event.

It’s just three years away. I don’t think some radical things can happen during such a short period of time.
Americans are blessed having Katie Ledecky, but at the same time her presence creates an illusion that everything is fine in American women swimming. In all her events americans won’t even have the second finalist. From 200 through 1500.

You don’t have a freakin’ clue what you are talking about.

The point went way over your head.

2
-9
Reply
The Wolverine
Reply to  Smith-King-Dahlia-Manuel

Who actually says “Top 25 SPEEDO world rankings”? Unless you work for Speedo. Or you are being paid advertising dollars by Speedo…Mel, Coleman, is that you?

Are you sure about this? I think there have been more women in the US under 16 minutes, It is true that some are retired. Besides KL, here some names I can come up with (current and retired): Leah Smith, Erica Sullivan, Ashley Twichell, Haley Anderson ,possibly Kensey McMahon, now Ally McHugh, Janet Evans, Katie Hoff, Haley Piersol and possibly Kate Ziegler. There may be a few more. I really should research this, though because now I am curious

From memory , Katie Ziegler had the WR at about 15.42 before the supersuit Italian lady ..

Maybe the Italian girl won Worlds 2009.. Still .my memory is better than. Old Swimmer as I knew about Katie Z . She belonged to a club called something like Bluefish?

You do have a great memory. Kate Ziegler swam for The Fish which is headquartered in McClean Virginia. BlueFish Swim Club is located in Rhode Island and was where Elizabeth Beisel swam growing up.

Who is this supersuit Italian lady?

0
0
Reply
Jfigols
Reply to  He said what?

Yes, I’m sure. The source is USASWIMMING.ORG If you have some difficulties navigating this official site of USA Swimming I can provide direct link and navigation instructions.

But you just got snatched sooooo maybe you’re having trouble navigating the site?

You may need to wait a day or two for USA Swimming to update the list.

Kim Linehan, Janet Evans and Katie Ledecky have kept the WR in the USA since 1979.

2
0
Reply
He said what?
Reply to  Yozhik

You meant 33 years ago for Evans.

Let’s give these gals a nice applause!

I see what you are doing here