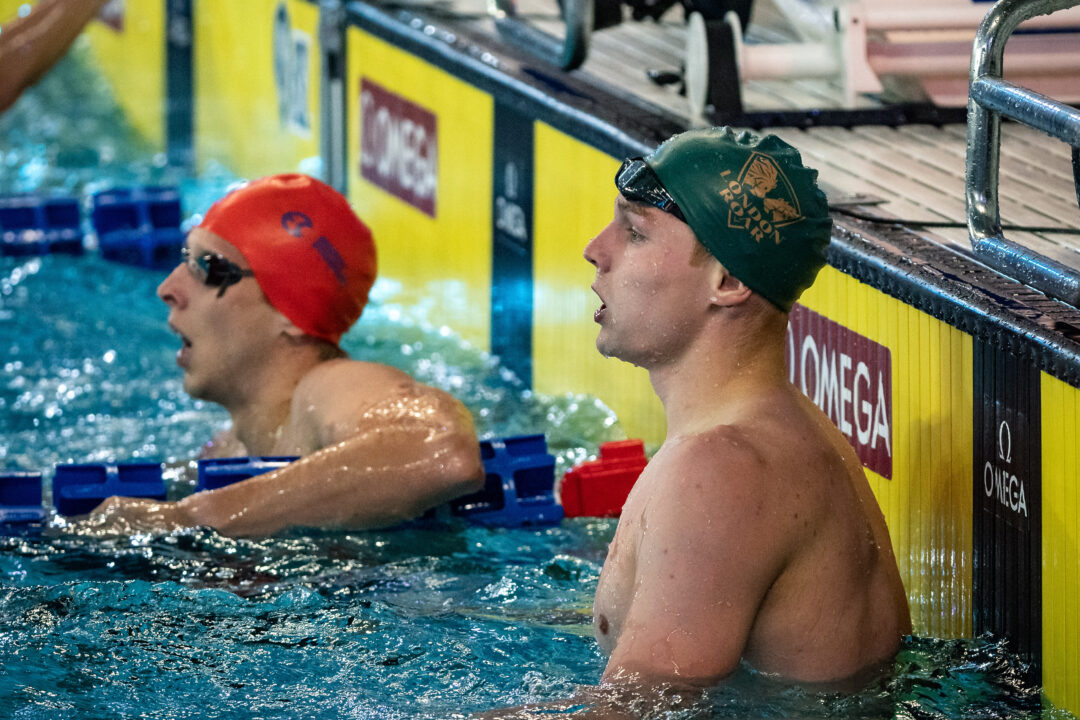 After defeating the Cali Condors last weekend, the London Roar will now battle Energy Standard, along with the third straight match with the LA Current. Archive photo via Giorgio Scala / Deepbluemedia / Insidefoto

The penultimate match of the 2021 ISL playoffs will showcase an exciting battle for first between Energy Standard and the London Roar, though if the LA Current keeps it close with Energy Standard and London going into the skins, things could get interesting.

This match looked as though it could potentially decide the fate of the LA Current, but even a third-place finish here will likely see them advance through to the final for a third straight season.

If the Current place third here and the Toronto Titans take second over the weekend, the two clubs will be tied for fourth in playoff points, but LA holds the tiebreaker in head-to-head points (including regular season), 958.5 to 934.5.

First Tiebreaker according to ISL rules:

Result between the teams; total of club scoring points in matches where these teams participated together. If such tie breaker is for qualification towards the Final, then Regular Season (the 10 matches, not the 11th Match) is taken into account as well.

While the Current and Titans will have only raced head-to-head two times all season, this will be the third straight playoff matchup between LA and London, with each club winning one match apiece thus far.

With Chad le Clos‘s competition status still unclear, the butterfly events this weekend should belong to LA Current’s Tom Shields on the men’s side. If le Clos does swim, his recent knee injury still probably lends itself to favoring Shields in all fly events. Vini Lanza and Teppei Morimoto from the London Roar will be competitive, especially Morimoto in the 200 fly, while DC’s Zach Harting and Camden Murphy could also make things interesting. Harting has been a huge asset to the Trident all season while Murphy has found his form in Eindhoven. Energy’s Sarah Sjostrom is the main star to watch in women’s butterfly, though London’s Emma McKeon and LA’s Beryl Gastaldello will be competitive in the 50 and 100 fly. DC’s female fly crew is a little weak by comparison but Linnea Mack, Klaudia Nazieblo, and Zsuszanna Jakabos should put some points on the board across all three races.

The Energy Standard duo Evgeny Rylov and Kliment Kolesnikov will have their hands full with the likes of LA Current’s Ryan Murphy and London’s Guilherme Guido, Luke Greenbank, and Christian Diener. The DC Trident will have a tougher time in men’s backstroke and will rely on Mark Nikolaev to score the majority of their points, though Nikolaev has been racing great in Eindhoven. The London Roar boasts World Record holders Minna Atherton and Kira Toussaint, who we might expect to be dominant if not for LA bringing its own duo of Ingrid Wilm and Kathleen Baker, the latter of which has been better in the playoffs than the regular season. The DC Trident will rely on Ali DeLoof and Isabella Hindley in the backstrokes, while Energy Standard will bring in heavy-hitters Mary-Sophie Harvey, Viktoriya Gunes, and Anastasiya Shkurdai.

Energy Standard’s Ilya Shymanovich is the man to watch in all breaststroke races this weekend. Based on last week’s results, no one should really challenge Shymanovich. After Energy Standard, the DC Trident probably has the strongest men’s breaststroke crew with Cody Miller, Felipe Franca Silva, and Tommy Cope. The LA Current and the London Roar are relatively weak in men’s breaststroke, however, and probably won’t make much noise. LA and London are much stronger on the women’s side with Imogen Clark and Kotryn Teterevkova representing LA, and Alia Atkinson and Annie Lazor representing London. Energy Standard will rely on teen duo Evgeniia Chikunova and Benedetta Pilato, while DC will need Tatiana Belonogoff and Maria Temnikova to have some big swims to make them competitive in this discipline.

The DC Trident and Energy Standard probably have the most comprehensive freestyle rosters, sporting swimmers that are both excellent in the sprints and the middle-distance races. Energy’s Sarah Sjostrom has been particularly exciting to watch in the 50 freestyle lately, while Siobhan Haughey has been on fire in the 200 and 400 freestyles. Either woman could set a World Record this weekend: Sjostrom in the 50 free and Haughey in the 200 free. DC’s Aleksander Shchegolev had a huge meet last week, nabbing two individual victories. He will need to swim just as well this time around in order to keep DC relevant though. The LA Current is perhaps equally well-covered on the women’s side but lacking in men’s sprinting capabilities at the present moment. The London Roar also covers all bases quite well in freestyle on both the men’s and women’s sides, though it will rely on its stars, namely Duncan Scott, Kyle Chalmers, and Emma McKeon to nab individual event victories.

The IMs should largely be battles between Duncan Scott and Vini Lanza of the London Roar and Tomoe Hvas of the LA Current. Andreas Vazaios and Jay Litherland of the DC Trident could also make some noise, though Energy Standard is somewhat weak in this discipline and will possibly rely on a combination of Kregor Zirk and Kliment Kolesnikov, who specialize in other disciplines. Energy Standard is much stronger in the IMs on the women’s side thanks to Mary-Sophie Harvey, Viktoriya Gunes, and Helena Bach Rosendahl. LA’s Anastasia Gorbenko and Beryl Gastaldello will also be competitive, particularly in the 100 IM, while DC’s Bailey Andison and London’s Sydney Pickrem could be co-favorites for either the 200 or 400 IM.

The relays will likely be dominated by Energy Standard and the London Roar, particularly the medley relays–Energy’s male 4×100 medley and London’s female 4×100 medley–though the LA Current could surprise, particularly in the women’s 4×100 freestyle relay. The DC Trident is likely to have a difficult time in all of the relays this weekend, though if they do surprise with a top-3 finish, it’s probably going to be in either the men’s 4×100 freestyle or medley relay.

Energy Standard is the favorite for Match 5, though with three of the four teams competing each having won at least one playoff match, it should be a competitive meet. It is possible that the LA Current could move past the London Roar for 2nd, though the Roar took down the Current last weekend, so we give the edge to them. However, if it’s close going into the skins, the final placing of the top-3 could be altered. Regardless, one of these teams is going to get their second playoff match victory in Eindhoven Friday.

I honestly couldn’t care less who wins as long as my daughter is given the opportunity to occupy the sofa and scream herself to speechlessness while watching the spectacle, regardless of whether it is Le Clos, Miller, Sjöström or someone else who makes the difference – when she’s training she’ll “be” Sjöström anyway. And that’s what counts. For me.

The rules are on the ISL website. LA advances based on the second criteria. First criteria was head to head record (1-1). Second criteria is total points in those matches. LA wins.

I honestly don’t even care who wins this. LON and ENS are 100% safe unless they come last and Toronto upsets Cali.

LAC is safe unless they come 3rd and Toronto upsets Cali.

DCT can’t make the final no matter what.

So this is an important match potentially for LA but not to anyone else.

Curious to know who you think will win this time. Last match you were pretty convinced that Cali would beat London.

London beat Cali in both skins which was unpredictable. I haven’t done the maths but I believe Cali probably has the most skins points of any team this year. So I always expect Cali to make huge strides in skins. They did well in women’s skins but I don’t think anyone expected them to get only 3 points in men’s while London got two swimmers through to both skins second rounds.

I’m 95% sure Energy will win. Roar is ahead by 12 points (which is unexpected, tbh, considering they’re resting Emma who is their second highest point scorer for the season despite missing a match), but their day 2 is much weaker than their day 1.