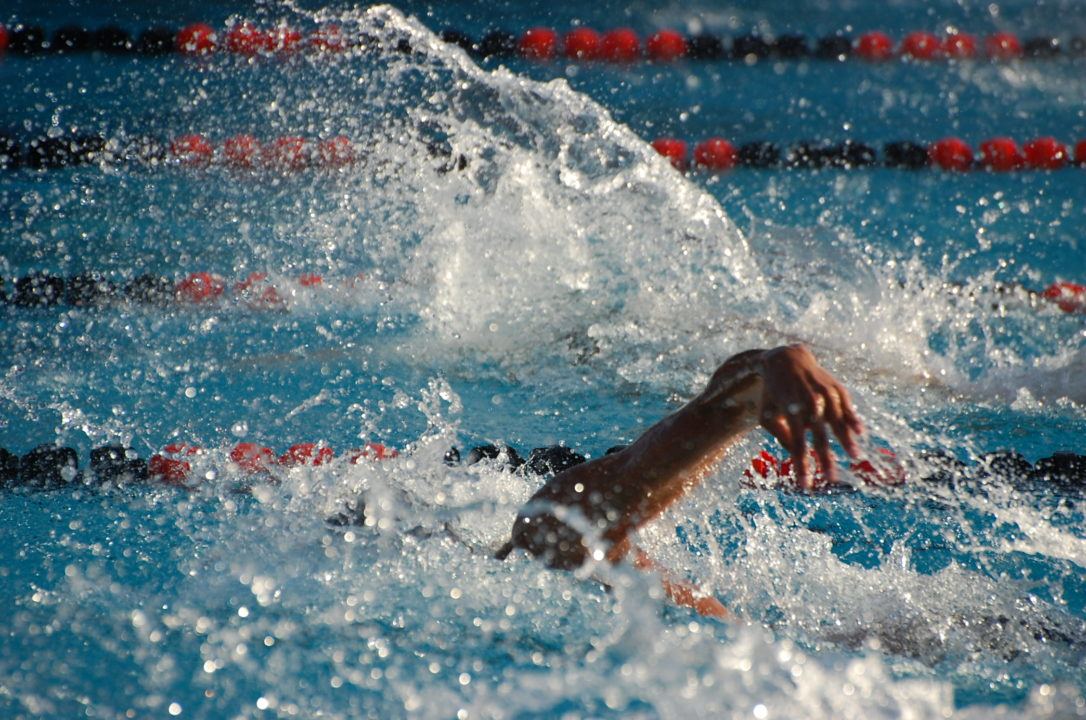 Carmel HS has extended their historic winning streak to 34 while Fishers improved to runner-up at the 2020 IHSAA Girls Swimming and Diving State Finals. Stock photo via Anne Lepesant

Carmel High School continues to make swimming history as they have clinched their 34th-consecutive state title at the 2020 IHSAA Girls State Finals at the IUPUI Natatorium.

Carmel once again dominated the state meet, distancing themselves away from runner-up Fishers by 218.50 points. At the 2019 Finals, however, Carmel won title #33 by 245.50 points.

The remaining top four schools (Fishers, Franklin, Northridge, Carroll) also placed top five last year, with only 4.50 points separating the group. Last year, it was Franklin who edge out Fishers for runner-up by just 2.50 points. Unlike 2019, however, Fishers took out Franklin for the state runner-up title by 43 points. The last runner-up finish made by Fishers was in 2015 when they scored 179 points.

Improving from 5th to 4th this year, after taking runner-up in 2018, was the girls of Northridge. Last year, it was Carroll who placed 4th by 2 points.

After taking 4th place last year as a freshman, now-sophomore Gretchen Lueking of Carmel took home the first IHSAA state title of the decade with her winning 200 free time of 1:47.50. In a tight race for second place, Kristina Paegle of Bloomington South (1:48.23) took out St. Joseph’s Mary Catherine Pruitt (1:48.28) by 0.05s.

Zionsville sophomore Devon Kitchel was the lone double-winner at the state meet. She first won the 200 IM final in a time of 1:59.47, just 0.06s slower than prelims. Then, after blasting 53.79 in prelims, Kitchel went on to re-claim the top spot in the 100 fly with a 54.72. Last year, Carmel’s Kelly Pash won the same two events.

Into the fastest event of the meet, the 50 free, it was a tight battle between Evansville senior Elizabeth Broshears and Carmel freshman Meghan Christman. At the finish, Broshears edged out Christman by 0.02s with a 22.97. Christman was also under 23 seconds at 22.99. Last year’s state champion, Northridge junior Elsa Fretz, settled for third at 23.14.

Lueking then led the 100 free prelims with the only sub-50 swim of the morning at 49.94. But in finals, Paegle took the race out two-tenths faster than Lueking, which denied her a second state title. Paegle avenged her 200 free finish with her winning 100 free time of 49.57, Lueking clocked in at 49.76.

The culture of excellence that drives this team has been built over several decades by a few amazing coaches. The swim club and high school team are run like a well oiled machine by head coach Chris Plumb who is a master at his craft. Congratulations to all the coaches and swimmers… they earn their titles with hard work and dedication.

is it safe to say Indiana high school swimming outside of Carmel is just really bad?

that’s the most hilarious thing I’ve read … ever.

Take a look at the results, all of them. You be the judge

I was there … Indiana is a fast HS swimming state regardless of Carmel.

I think it’s more safe to say that parents will move to Carmel or enroll their children in that school if they want them to swim for the team. I know more than one family that’s moved there solely as a swim related decision.

But do they train with their HS team or stay with the Carmel swim club during HS season – or are they one in the same?

carmel dominates because they had a history of being excellent and people subsequently moved there, making them the biggest team in the state. having a huge team of good swimmers makes them able to qualify more people, leading to them scoring more points because they can have an overwhelming amount of swimmers in each event. my team had the winner of the 100fr and 2nd place in the 200fr under a brand-new coach and had several other qualifiers in the 100 back and relays. So, no. It’s not just carmel.