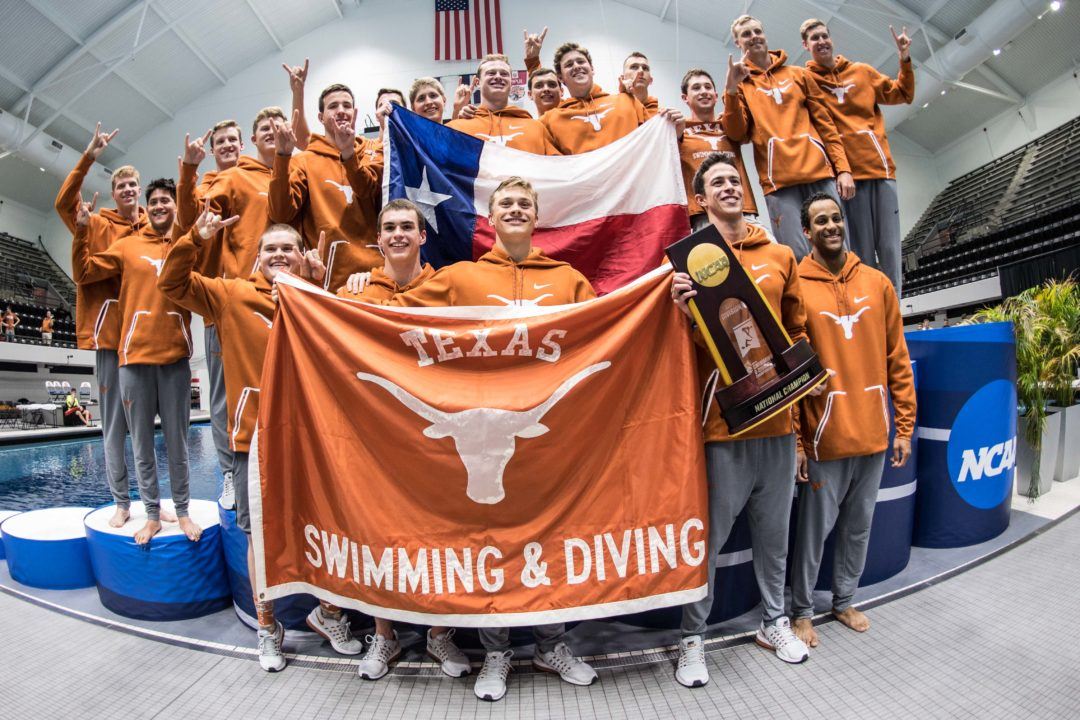 In the NAIA, there was a tie for the top women’s spot between Keiser and SCAD-Savannah at a GPA of 3.83, while Saint Ambrose (3.72) led the men.

While a small conference, the Big 12 men’s championship is always an exciting look into what the Texas Longhorns will do at the NCAAs. That may be more important than ever this year, as Texas will have stiffer competition in the team standings at the NCAA this time around.

The Longhorns lost some key players, with Jack Conger, Clark Smith, and Will Licon being their biggest losses. Despite that, they are still in no danger of losing the Big 12 title, and are still the favorites to win the NCAA title by many people. This year’s meet, though, seems a little more serious than the past few have. That’s because Texas has been (not swimming well) or (training harder than ever before), depending on who you ask, and a few key Longhorns haven’t yet qualified for the NCAA Championship meet. That includes John Shebat, who has missed most of the spring semester and ranks just 38th nationally in the 100 back (46.73) and 21st in the 200 back (1:41.52). He scored 34 individual points at NCAAs last season.

Yes, a healthy Shebat is more-than-capable of hitting the times needed to qualify, but those scenarios will add just a little more edge to the Big 12 Championships than the Texas men are used to.

West Virginia and TCU are the only other 2 men’s teams in the Big 12 with West Virginia having a slight upper hand over TCU after beating them in a dual meet this season.

Texas – Joseph Schooling (senior butterflier/freestyler), Brett Ringgold (senior sprint freestyler), Tate Jackson (junior sprinter), Townley Haas (junior freestyler), John Shebat (junior backstroker), Austin Katz (freshman backstroker) – It’s hard to make a concise list of stars fot the Longhorns because, well, they’re pretty much filled to the brim with stars. Joseph Schooling will be aiming for wins in the 50 free, and both fly events, which he should be able to handle without a huge problem. Townley Haas has looked good this season, and we may get to see him throw down a great 200 free going into March. Austin Katz has given Texas more backstroke depth, which they weren’t really in desperate need of anyway, but nonetheless has posted a 45.3 100 back, 1:38.4 200 back, and 1:36.0 200 free.

TCU – Joao Andrade (freshman freestyler), Jakub Swierczynski (senior breaststroker) – Breaststroker Swierczynski finished 4th in the 100 breast and 7th in the 200 breast, and will look to give TCU some of their best finished this year as well. Andrade is a Brazilian freshman freestyler who has broken the team record in the 200 free this season, and has the potential to A final in it as well.

West Virginia – Merwane Elmerini (junior sprinter), Chris McMahon (senior distance freestyler), Trayton Saladin (sophomore freestyler/backstroker), Nate Carr (senior IM’er) – Carr took down some pool records this season and will be a bright spot in the team scoring. Saladin was a backstroke A finalist last year, and looks to be in better form this year, so he should do some contributing of his own. Elmerini has been in great form this season, and should show up in a few A finals himself.

The battle of new teammates, Katz is a freshman who has been tearing it up this season, while Shebat is the defending champion in both back events. Katz has already been faster in both races this year than Shebat went to win them last year, so will the rookie unseat the defending champ? And more significantly, what will Shebat look like having not raced since January 8th?

Without Jack Conger to race in all of his events, who will Schooling shift his rivalry to? Rivalry is of course meant in a friendly way, since he and Conger were teammates, but watching Conger and Schooling go at it was one of the best parts of the Big 12s. Without that pressure from Conger, where will Schooling be drawing that extra motivation from? It’s possible that job will fall to Caeleb Dressel, who spent last weekend breaking NCAA records in 2 events we’re not used to seeing him swim: the 200 IM and 100 breast. After seeing that, Schooling may want to make a statement of his own in the events that he and Dressel will likely be racing against each other in at the NCAAs. He could make the effort to let people know that Dressel won’t just run away with the 50 free and 100 fly NCAA titles.

Texas is the undisputed favorite to win this meet, and it will likely be by roughly the same margin they did it in last year. The competition between West Virginia and TCU will be far more interesting from the horse-race perspective, with West Virginia as the favorite for runner-up.

The Swimulator season-best swimulation comes out with final swimming scores of Texas 1026, WVU 699, and TCU 655.

schooling challenging dressel in the 50 is a joke.

Big 12’s are a joke for the Texas men. We may see some big swims for the sake of NCAA seeding from some of them, most likely Shebat or one of their breaststrokers that they’ve been developing IMO, but as to the Dressel-Schooling matchup and the upcoming battle between Texas and Cal for the National title, we won’t get any insight on that until the big boy meet in March

The race for 2nd will be as uninteresting as the race for first. TCU was beaten by 100+ in their own pool by WVU and are now without their head coach…

What about WVU’s Jake Armstrong? He was the only non-Texan swimmer to win gold in an event last year.

100% agree. Results veer down steeply behind Texas. The top five Division III schools would probably put up better fights than WVU and TCU. It must be difficult for them to recruit when your taper meet is a tri-meet that you have no chance of ever winning.

Another training session for Texas? Even if Schooling puts a 44 high for 100 fly, he still can win. But i believe he will want to improve his Big 12 meet record of 44.06

But could Tim Tebow?