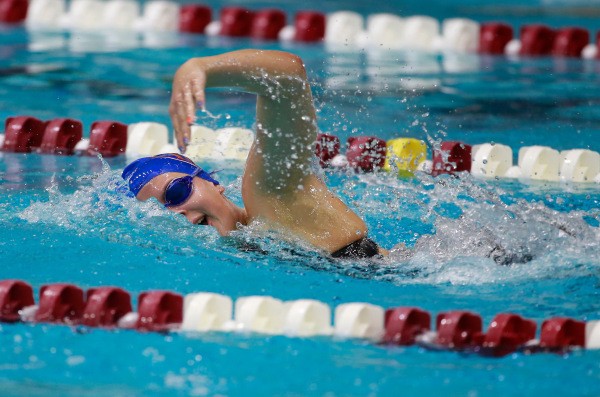 The Boise State Broncos kept a relay sweep alive at the 2017 Mountain West Championships, breaking the conference 200 free relay record and winning the 50 free to build a lead of more than 100 points on defending team champs Nevada with two days to go. Current photo via Boise State Athletics

For the second year in a row, the Boise State Bronco women have swept the opening night relays at the Mountain West Championships, jumping to an early team lead.

It’s been a volatile conference for almost a decade, with no team successfully defending its team conference crown since BYU won 4 straight from 2007 to 2010. Nevada is the defending champ, but now trails Boise by triple digits. The Broncos haven’t won the conference since 2014.

Boise State won its third straight relay of the meet and broke its second conference relay record with a 1:28.43 in the 200 free relay. The quartet of Brittany Aoyama (22.46 leadoff), Abbey Sorensen (22.10), Katelyn Martin (21.68) and Allyson Kleinsorgen (22.19) blew out the field by more than two full seconds. The swim also broke the Mountain West meet and all-time records of 1:28.65 set by San Diego State back in 2014.

Martin was the star with that 21-second split, foreshadowing (spoiler alert!) her own 50 free win later in the night.

San Diego State was second in 1:30.63 and Wyoming was 1:31.05 for third. Though Boise State led by just 2 points after night 1, Nevada’s sprint weakness hit hard here, with the Broncos opening up an 18-point lead as Nevada finished 6th.

The Nevada Wolfpack hit back, though, with junior Sharae Zheng successfully defending her conference crown on the 3-meter springboard. Zheng scored 421.45 to smash her own conference championship meet record as well as the Mountain West’s all-time record set by Nevada’s Krysta Palmer back in 2015.

The win put Nevada back into the lead by 37 over Boise State, who only scored two total divers to Nevada’s 4. San Diego State vaulted to second place, 12 behind the leader and 25 ahead of Boise.

In a tough battle up front, Air Force’s Genevieve Miller won her fourth consecutive Mountain West title in the 500 free, becoming just the second Mountain West swimmer ever to four-peat the same event. Stretching back in MWC records to the year 2000, the only other swimmer to accomplish a similar feat was BYU’s Brittany Davis Burk, who won the 200 back from 2004 to 2007.

Miller will also have a chance to four-peat the 1650 free on Saturday. In this 500, she was thoroughly tested by Boise State’s Emma Chard, who kept things too close to call over the first 100, dropped back about a second or two over the middle 300 and then closed like a rocket to very nearly overtake Miller for the win in the final lap. Miller would go 4:38.98 for the win, breaking the conference meet and all-time records. Meanwhile Chard was 4:39.22, also under the old records, held by Miller from 2016. The championship record was 4:40.15 and Miller’s all-time record was 4:39.00.

Chard didn’t get the win, but did power Boise State back into the team lead by 32 over Nevada.

But once again, Nevada roared back with a win to retake the team lead. Teresa Baerens, a two-time conference 200 free champ for the Wolfpack, capped her senior year with a conference 200 IM title in 1:58.92. Her consistent splitting held off a hard-charging Boise State freshman Robin Pinger for the title. Pinger was 2:00.27, just ahead of San Diego State’s Frida Berggren.

Nevada placed three swimmers inside the top 9, winning both the A and B finals. (Arantxa Medina, also a senior, won the B final in 2:01.74). Even with a solid effort from Boise State’s IMers, Nevada retook the lead by just 3.5 points over the Broncos.

But it was once again Boise State’s sprint prowess combined with Nevada’s sprint weakness that won the day. Boise State emphatically went 1-2-3 in the 50 freestyle for a massive point swing (87 points between those three alone) that launched the Broncos into the team lead by 115.5.

Katelyn Martin was 22.11 for the win, swimming the second-fastest time in conference history behind only 2014 champ Anika Apostalon. Aoyama went 22.38 for second and Sorensen was 22.57 to cap the sweep more than a tenth ahead of Air Force’s Lydia Knutson (22.69).