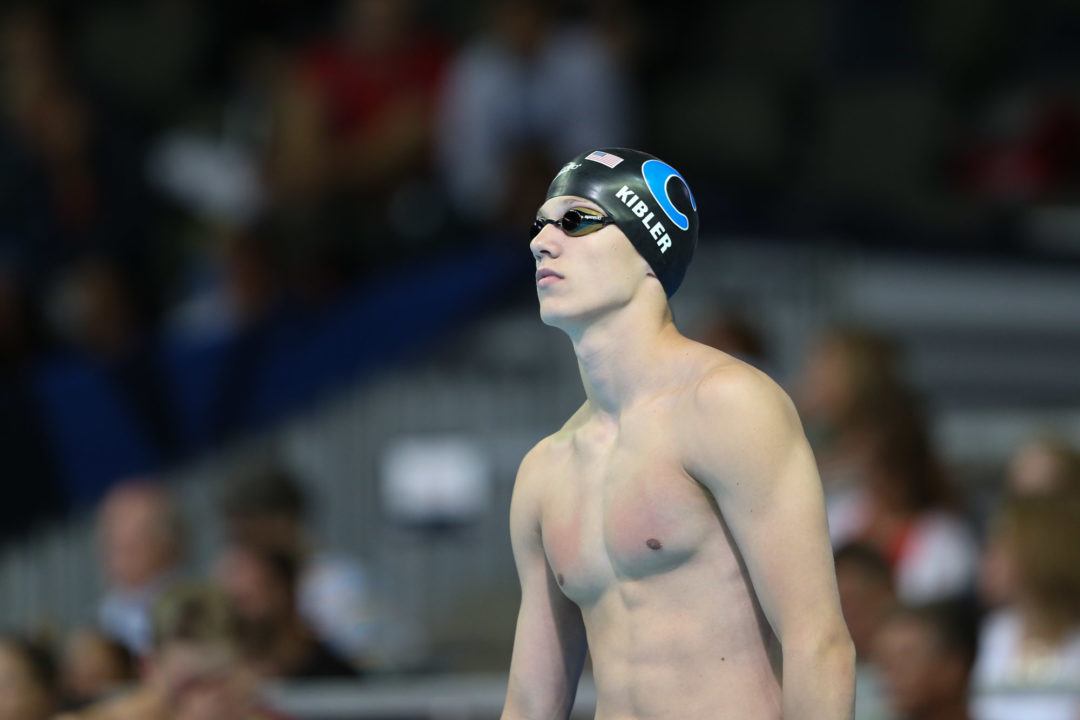 Carmel Swim Club's Drew Kibler will take on the 200 free and 100 back tonight.

Lakeside Swim Team’s Brooke Forde dominated the 400 IM final, finishing almost 10 seconds ahead of the field with her 4:02.51. The battle for 2nd behind her was a close one, as 3 swimmers finished in the 4:11-range. Samantha Burchill and Kelly Pash rounded out the podium, while Madison Homovich (4:11.84) finished just off the podium.

Reece Whitley took another second off his lifetime best, sweeping the IM races at this meet with his 3:47.15 victory in the 400 IM. 15-year-old Carson Foster made a big drop tonight to take silver behind him. The battle for bronze saw 3 men finish in the 3:49-range, led by Kieran Smith. Narrowly missing the podium were Christopher Smith (3:49.27) and Talmadge Davis (3:49.91).

It took a sub-53 swim to make the podium tonight, as the top 3 women were all in the 52-high range. Gator Swim Club’s Isabel Ivey ran down Enfinity Aquatics’ Olivia Carter on the back half, with Ivey out-touching her for the gold. Pine Crest’s Jessica Nava was sub-53 for the first time in her career to take bronze.

Kingfish Aquatics’ Camden Murphy and Ohio State’s Noah Lense were neck-and-neck into the finish of the 100 fly, with Murphy getting his hands on the wall first for the gold. Cardinal Aquatics’ Nicolas Albiero secured the brinze medal, running down Bolles’ Ariel Spektor (47.39) on the final 25.

It was back-to-back gold for Isabel Ivey, who returned to the pool minuted after winning the 100 fly. Ivey narrowly trailed Greater Tampa Swimming Association’s Morgan Tankersley through the 100, but made her move on the 3rd 50 to break ahead for gold. Tankersley held on for silver, while Lakeside Swim Team’s Brooke Forde finished 3rd to pick up her 2nd medal of the night.

15-year-old John Walker from SwimMAC Carolina gave Carmel Swim Club’s Drew Kibler a big run for his money tonight, but came up just short. After cruising his way through prelims this morning, Kibler took the outside smoke approach to win gold in 1:33.40, just 4 hundredths off his own NAG Record from the 800 free relay leadoff on Wednesday night.

Nashville Aquatic Club’s Alex Walsh took down the 15-16 NAG Record in the 100 breast, knocking another second off her best to set the bar at 58.80. Her teammate, Allison Raab, joined her on the podium, taking bronze behind Cardinal Community Aquatics’ Emily Weiss.

Coming off his gold medal performance in the 400 IM, Reece Whitley kept the ball rolling with a win in the 100 breast. That’s his 3rd individual victory of the meet so far. Bolles James Daugherty, a Cal commit and Florida state champ, came into the wall 2nd to outpace Ohio State Swim Club’s bronze medalist Jason Matthews.

Alex Walsh hopped right back into the water after her record-setting 100 breast, this time racing in the 100 back final. Walsh earned golds in both races tonight, surging through the back half to outpace SwimMAC Carolina’s Julia Menkhaus. Both swimmers were sub-53 tonight, separated by just 3 tenths.

Blue Dolphin’s Zachary Poti was right at his prelims time, swimming the only sub-48 of the field to win gold. Nicolas Albiero picked up his 2nd medal of the session, taking silver by a tenth ahead of Quest Swimming’s Clark Beach.

Narrowly missing the podium was 15-year-old Destin Lasco, who took 4th in 48.25. Cardinal Aquatics’ Drew Kibler turned in a 48.57 to take 6th in his 2nd race of the night.

A close battle to the finish saw the top 3 teams all finish in the 1:31-range. Nashville Aquatic Club led through the 150 after Alex Walsh dropped a 22.03 on the 3rd leg, but Gator Swim Club’s Isabel Ivey came up with a 22.33 to overtake NAC in the end.

4.02.51 for Brooke Forde who wins the 400 IM. She had no competition. A new PB for her by 0.15s. I thought she was still 16 but she’s 17. No weak stroke. With DiRado retired and Beisel close to the end, I see her qualify for next year’s world championships.
First time of the week I watch the live stream of finals. Is the announcer of the pool paid to take vacation during the races? Maybe he could give us some splits. We have no clock on the screen.

Kidding, I think Eastin is the front-runner.

Reece Whitley wins the men’s 400 IM in 3.47.15. It’s tough to judge him as he always looks easy in the water. Even when he suffers. He looked tired on freestyle.
I told you to keep an eye on Carson Foster. He didn’t disappoint with a great second place not so far from Whitley in 3.48.09. Big time drop of 3.85s. Remember he broke a 10 and under NAG record of MP. He finished very strong on freestyle.