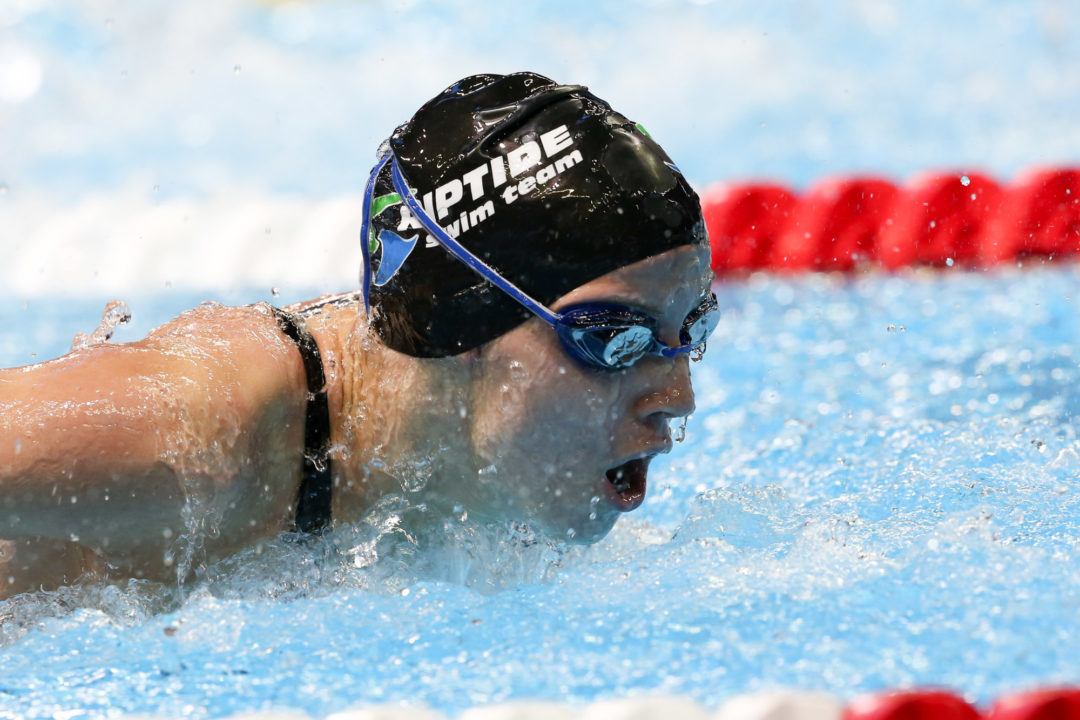 Regan Smith (pictured above) and Carson Foster topped our picks for 2016 swimmers of the year in the 13-14 age category. Archive photo via Tim Binning/TheSwimPictures.com

Smith tore up the 13-14 age group throughout 2016, and was a formidable force in open swimming as well. In addition to setting three national age group records (some of them multiple times), Smith held her own on the international stage when she competed in the FINA World Cup meets in Tokyo and Hong Kong as a member of the U.S. National Junior Team this fall. There she became the 11th-fastest American in history in both the 100 SCM and 200 SCM backstrokes. Her 200 time is currently ranked #12 in the world for the 2016-17 season.

In any other year, Ulett would have stood out as the undisputed champion of the 13-14 girls. She spent the first half of the year as a 13-year-old, for which she earned the #1 IMX score in SCY. While only 14 for the last month or two of 2015-16 SCY season, Ulett nonetheless managed to rise to #3 in the single-age category IMX ranking. Ulett rose to national prominence after dropping 5 seconds over the previous 12 months to break the NAG in the 100y fly at Georgia 14&U Short Course Championships in February. She was the first 14-and-under girl to break the 53-second barrier, which was a remarkable accomplishment. Ten months later Smith obliterated that mark, but the two girls remain the only 13-14 sub-53s in history. Ulett has the first half of 2017 to close the gap.

Lu swam the backstroke leg on KING’s national age group record-breaking 200y medley relay and 200m medley relay. He has already notched 2 SCY performances and 3 LCM performances on the all-time top-100 list for 13-14 boys, and he has another 14 months in which to improve his rankings.

Kids out there getting into the sport, all of these kids on this very honorable list (possibly with the exception of the long distance studs) have taken their UNDER WATERS to a complete different level. I’ve been at multiple high level meets with the majority of these fantastic swimmers and I can testify to their amazing under waters.

In my opinion, after watching these swimmers accomplish some of their NAG’s, their under waters have become such a game changer that we will all look back at this time in the sport and realize this was when the “fifth stroke” was just starting to be mastered and utilized.

Add under waters to your arsenal. Without them, especially in SCY,… Read more »

Mike Parratto looked quietly confident in College Station. Smiling and talking with old friends. He knows he has someone pretty special to guide through the next 3+ years. No reason not to look for a full second drop in her 100m back btwn now and summer. Stronger, fitter, vastly improving underwaters. And a ton of confidence.

Also, didn’t get to see Walsh in person but wow. These two relative kids will be teammates on the biggest stages SOON. Congrats.

Regan Smith, Destin Lasco, Alex Walsh, Carson Foster, Kate Douglass. Wow! A big part of my favorite US juniors is mentioned here. Insane talents. No doubt most of them will swim one day at olympic games.

Had the pleasure of watching her in Texas a few weeks ago at Speedo Juniors. Honestly, wow. So much talent and so laid back at only 14. Won high point and was very humble. Congratulations on another great year.

Walsh should be runner up..

I agree. But it’s not so important. 🙂