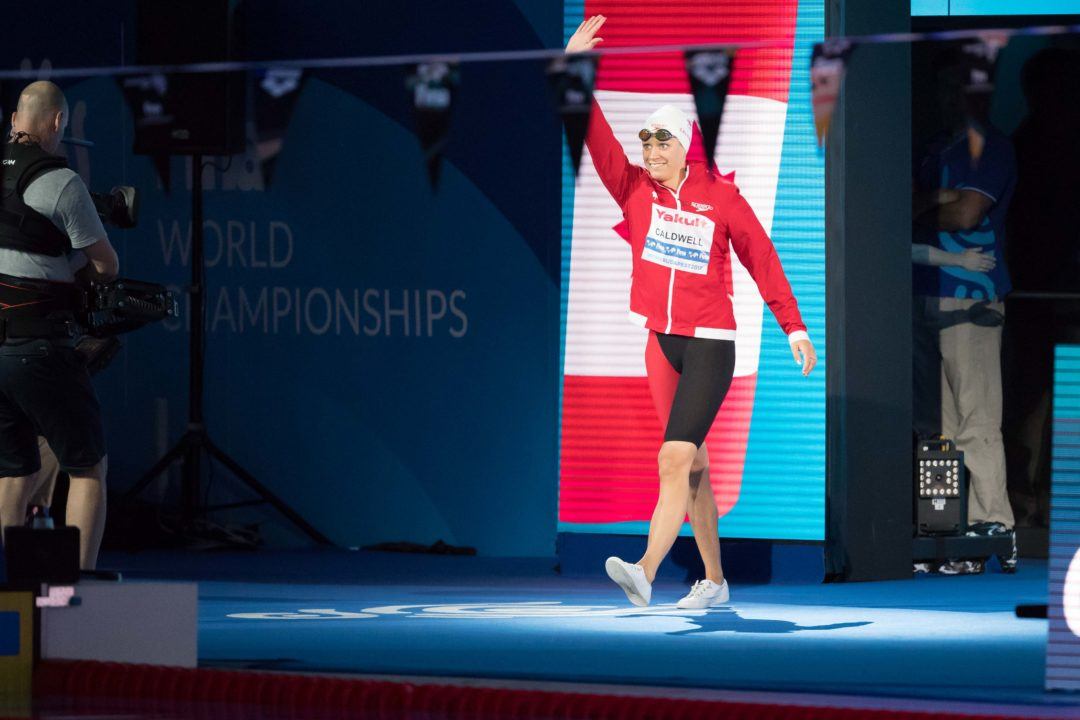 2016 Olympic bronze medalist Hilary Caldwell has called it a career, per a release from Swimming Canada.

After contemplating retirement after the 2017 World Championships in Budapest, Caldwell went to train on the Gold Coast with Australian coach Michael Bohl at Griffith University with the support of HPC-Victoria Head Coach Ryan Mallette. Heading into last month’s Commonwealth Games, she had already made the decision it would be her last competition.

“I got out of the pool and the first person gave me a hug,” said Caldwell, who finished 5th in the 200 backstroke. “I got quite emotional, a lot more than I thought I would.

For the first time in years she’ll have some free time on her hands, and she’s looking forward to it. “I’m kind of excited,” said the White Rock, B.C., native. “I haven’t had a free summer to do whatever I want in about 13 years. I have a lot of friends I owe visits to.”

“I would like to congratulate Hilary on her swimming career,” said Atkinson. “She has been a great competitor who was very focused on maximizing her performance. Winning world championship and Olympic medals was a great achievement and we all wish her well in her life post swimming.”

“Hilary was not necessarily the most talented athlete that we ever had but she was definitely the most determined,” said Mallette. “If you set a goal in front of her she was able to pursue that with a vigor no other athlete I ever worked with had.”

“You get athletes who are really good when they’re 12 to 16, it comes a little easier and they get a taste of success early,” said Cochrane. “Hilary was not one of those swimmers. She had to overcome so much. Everybody didn’t believe in her when she was younger . . . but it was always inspiring to see a woman who overcame a lot of obstacles to get to be one of the best in the world.”

For Caldwell, winning an Olympic medal was the pinnacle of her career. “An Olympic medal is something I dreamed about since I was a kid,” she said. “It took me a while before I was really OK with that performance because it wasn’t the time I wanted. It took me a while to get to the point it doesn’t matter what the time was in the Olympic final, it’s about the place. That one is pretty special.”

On what she will miss in the sport most: “The people,” said Caldwell. “Everybody kind of laughs at me on the Canadian team. I know everyone on deck.I’m chatty. I love meeting people. I love what swimming has enabled me to do. I have couches to crash on all over the world and friends all over the world.”

You can read the full article from Swimming Canada here.

congratulations to hilary on a stellar career! best of luck with your future endeavors!

She’s had a great career overall. Gold at the Pan Am games on home soil, helping Canada win a couple medley relay medals, and an Olympic Bronze along with her world championship medals. But with Kylie Masse and Taylor Ruck both swimming the 200m backstroke faster than Hilary Caldwell ever has and both improving fast, and Jade Hannah possibly not being all that far behind, it’s probably about time.

I remember Hilary Caldwell standing on the podium in Rio Olympics. There was no person in the world happier than her at the moment. Even Maya Dirado with her outstanding victory and Gold medal didn’t look more radiant. An Olympic medal IS an Olympic medal no matter what color it is. For very many it remains unfulfilled dream.