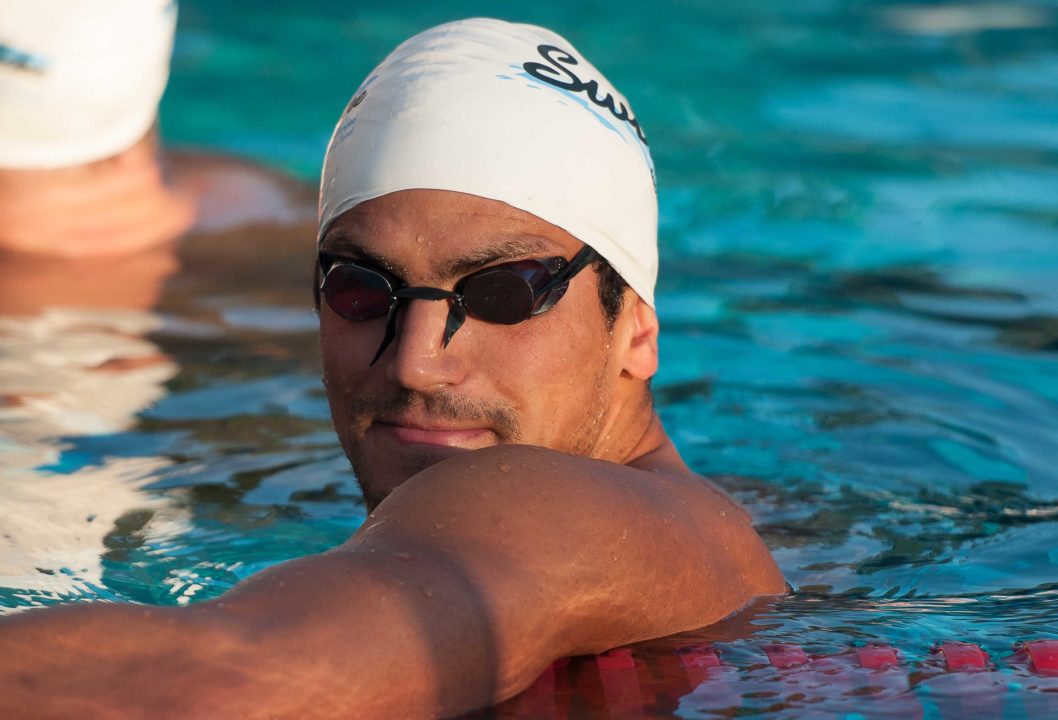 Ous Mellouli (above), the defending Olympic champion in the 10km marathon swim, had to come through the last-chance Olympic qualifier meet to get his shot at gold in 2012. Archive photo via Mike Lewis/Ola Vista Photography

For the second straight Olympiad, the final entrants to the open water 10km race in Rio will be decided in Setubal, Portugal, FINA has confirmed to SwimSwam this week.

Though the dates haven’t yet been set, knowing the location will help some of the world’s best plan their contingencies in the event that they aren’t in the top 10 at the 2015 World Championships.

At a basic level, the top 10 swimmers in the 10km race at the World Championships in 2015 will automatically be eligible for the Olympics. Then, the FINA Olympic Marathon Swim Qualifier (the race in Setubal) will select at least 14 more men and 14 more women for the Olympics, plus a minimum of 1 each from both genders from the host country Brazil (though it’s likely that Brazil will already be handled in the above two finish orders).

This begs the question: How important is the Olympic Marathon Qualifier, given that the 10 best open water swimmers, theoretically, come out of the World Championships in 2015?

As it turns out, in practice, this qualifier is extremely important in the wild world of open water, where the 10 best at any race, even a World Championship, are not as indicative of the 10 best in the world as they would be in the pool.

In 2012, four of the six open water Olympic medalists came not from the 2011 World Championships qualification, rather they came from the 2012 Marathon Olympic qualifying event, despite that being only a few months before the actual Olympics.

In fact, two of the medalists (Haley Anderson and Ous Mellouli) didn’t even participate in the 10k at Worlds in 2011, and a third (Eva Risztov) was disqualified at that meet. There seems to be some sense of momentum in play here, especially in 2012 where many traditional pool distance swimmers were still just testing the waters of the marathon swim.

Generally speaking, most of the high finishers at the Olympics qualified through the World Championships, but those who rose to the top of that pile were coming through the qualifier.

The speculative quandary is whether or not this will play out similarly in 2016. As the open water side of the competitive sport continues to grow, there are more-and-more swimmers who are focusing on open water, if not specifically specializing in it.

Our initial hunch is that as that two things are going to happen with 2016 Olympic qualifying: one, there will be fewer surprises, like Haley Anderson and Ous Mellouli, who take up open water at the 11th hour to capture Olympic gold, somewhat muting the medal effect of the Olympic qualifier.

Besides that, however, I think as open water training and science is developing, people will be less afraid of this marathon qualifying event in Setubal, because success has come from that event, and at the very least, we may see increased participation at major ‘preview meets’ for the Olympics in 2016 to try and gain some of that same momentum.

I meant: any thoughts in general, about anything that i wrote?

Hi. Why were the times achieved in setubal so much faster than those achieved in London 2012? Is the course shorter? And why were the women’s times about as fast as (or faster than) the men’s? And lastly, how do one qualify for the 2016 setubal olympic qualifier?

Knut – open water is non-traditional as compared to pool swimming in that times aren’t always comparable. Can depend on pack pace, courses can slightly vary, can depend on the lines that the swimmers take. Pool swimming is all about times, open water swimming is more focused on racing and placing, so each race can be very different.

National federations have to decide how they’ll decide their two participants for Setubal. Each country could have different rules.

Thanks for answering, Braden!

Ok, I wasn’t aware that each country could only send two participants for Setubal, but I guess thats what you are saying? Im from Norway and I don’t really think there are any guidelines made for this here yet. Or maybe there are, I don’t know. So there are no general rules, for instance that you have to be joining the whole world cup series, or anything like that? Sorry, Im just asking in case you know anything more 🙂 And is there a web-page for the Olympic Qualifier Race in Setubal? I haven’t found one yet. Again, thanks a lot for your help!

No problem Knut. Happy to help. If you’re a coach or athlete…I would suggest reaching out to the Norwegian federation. They may not be aware that anybody is interested in participating. Going to a stop on the LEN open water series might give them an indicator that you’re serious about it.

Haven’t seen a page yet for Setubal. The information we received was through ‘asking questions,’ so don’t know how much has been really put out in a formal manner. The info will probably go here when available: http://www.fina.org/H2O/index.php?option=com_content&view=article&id=5105&Itemid=1942

Thanks again! Well, Im an athlete and I have been doing a lot of open water in general, but only two 10 k´s. The fastest one I did was in 2.03. they say the race I did is 10.5 k and its a fjord crossing, which includes some waves and streams. On the other hand I did wear a wet-suit. I won these races, so Im hoping to take it to a higher level by training harder and specializing more on the 10 k. Im also very curious how much one gains by being placed in a group/ just behind someone faster. I don’t know if you have any experience here? Im guessing, based on my experience as a pool-swimmer… Read more »

How do you qualify for marathon swimming in the olympics ? Is there an age limit?